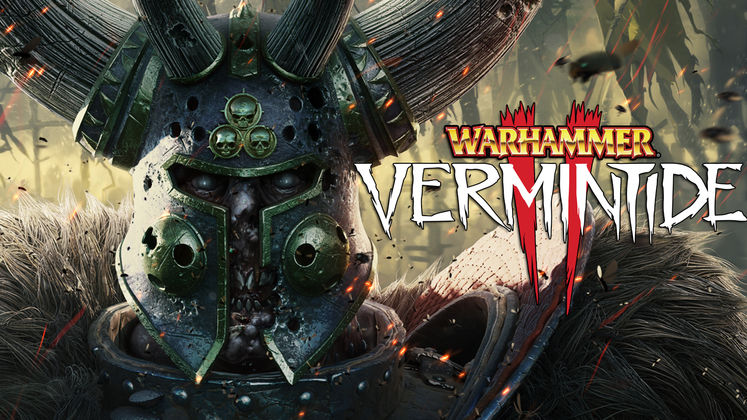 Warhammer: The End Times – Vermintide reminded us just how much we missed Left 4 Dead, then gave us a melee-focused fantasy version to make us feel better. Now Fatshark are attempting to make an even better sequel. How are they planning to improve it? Drop the clumsy “The End Times” part of the title and add Chaos. That should do it. We’ve got an early play of a level of Warhammer: Vermintide 2, and we’re already impressed.

Our Warhammer: Vermintide 2 interview with Martin Wahlund and Mats Andersson! Warhammer Vermintide and Strange Brigade Devs Explain Why There Aren't More Left 4 Dead Games! I had a choice of two characters – Kerillian the Elf, previously a Waywatcher but now a Shade (and presumably a Dark Elf), and human Markus Kruber, previously the stuffy Empire Solder and now a Knight. Kerillian has a long spear, does extra damage from behind, and has a Stealth power ‘Infiltrate’. Markus has a huge hammer, the passive ability to gain health when close to death, and a lovely Charge move to send those Skaven flying. In the absence of my favourite Witch Hunter, Markus is the one for me. 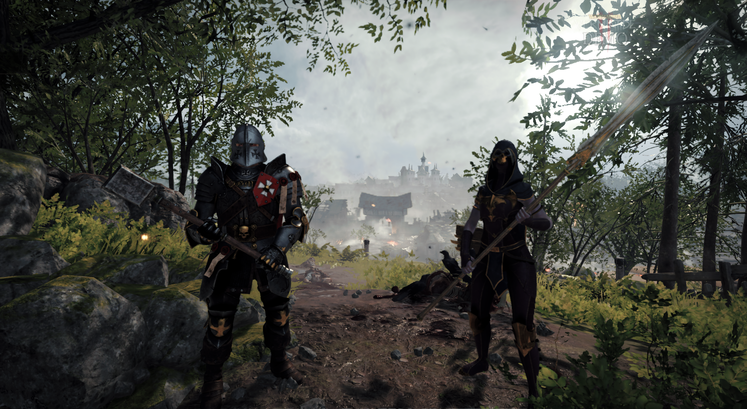 Unfortunately, as this was a very early demo it was strictly single-player, which as you know is the best way to play a co-op-focused game. I remember having hours of fun in Left 4 Dead shouting “no don’t use that bloody medkit now!” at my AI teammates, who couldn’t respond and which was part of the reason I hated them. With the lack of real players and the absence of the excellent conversations the characters had in the first game (they hadn’t been put in yet) I had to make a mental note to temper my enthusiasm.

We arrived on the outskirts of Ussingen, an extremely badly off town that’s just been raided by the forces of Chaos and Skaven. Yes, in Vermintide 2 the big twist is that the two backstabbing forces of darkness in the Warhammer universe have teamed up. They hate each other, but they hate you more. 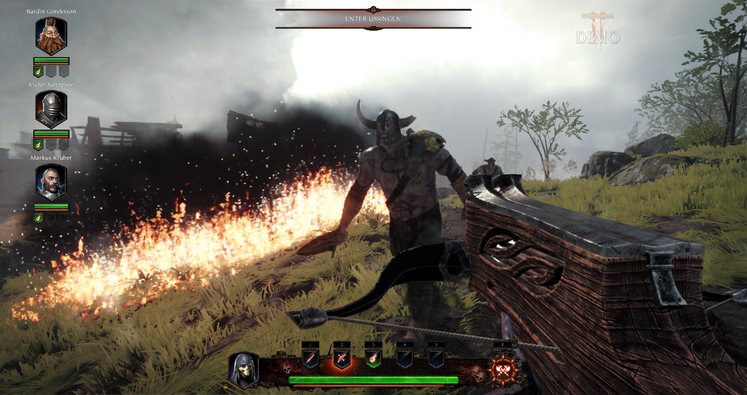 In the midst of a few burning caravans we found some Chaos warriors, and I realized I also had an auto-rifle. I gunned a couple down and discovered that these horned swines were far tougher than the usual Skaven cannon fodder, so had to switch to my giant hammer very quickly. Squishing a few brains in their own helmets never gets old. Then they starting pouring on us from all angles growling “scream for mercy” and the hammer got twice as much work.

If I had one complaint about the whole experience, which I’ll mention now (and apart from it only being single-player), it’s that the graphics look kind of washed out. It might just be this particular map, or the early build, but no matter how good the game generally looked, and it does look good, it was always very difficult to tell who was a member of my team and who was a Chaos Warrior. Multiple times I’d think I’d killed everyone, my team would be standing around and I’d go “hang on, don’t I only have three team members?” And then would get attacked by the “extra” party member. 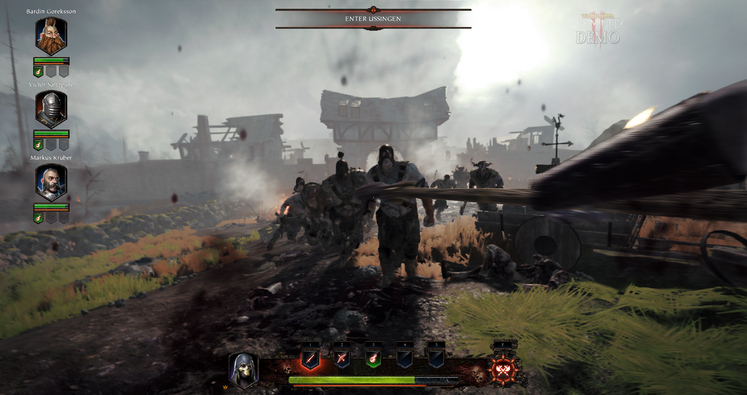 Combined the Skaven and Chaos make for a potent – and, most importantly, original – combination. Vermintide 1 was, perhaps justifiably, criticized for looking and feeling just like Valve’s Left 4 Dead. This was most noticeable with the Skaven enemies since for the most part all the rats fell into the same classes as the Infected in L4D – the Rat Ogre was the Tank, Packmaster was the Jockey, Gutter Runners were Hunters, etc. With the introduction of Chaos suddenly Vermintide has a lot more variety.

Giant armoured Chaos Knights barred the entrance to Ussingen, slowly advancing but powerful and could take a lot of punishment. Fat, shuffling poison-spewing Priests stayed out of combat but got in the way. Then we have the terrifying Spawn of Chaos that ended the level in a boss fight, a giant, pulsating mass of flesh and tentacles that can pick up allies (and you) and even eat them (and you)! Never saw anything like that in Left 4 Dead, I can tell you. 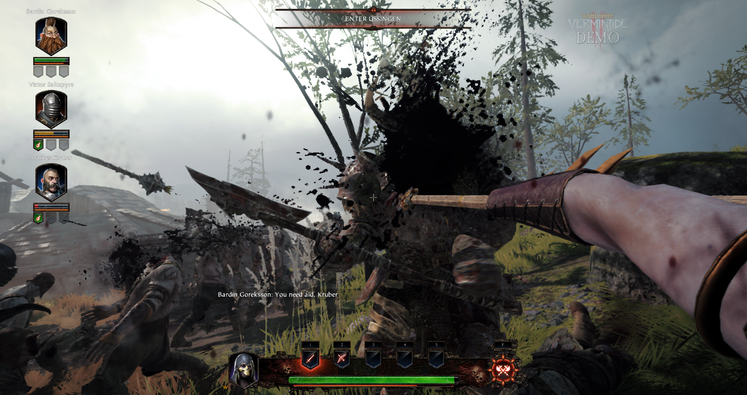 In general the experience of Vermintide 2 is exactly as you’d expect if you’ve played the first game, or Left 4 Dead. You and three others (AI or, preferably, human) make your way through a town besieged by Skaven and Chaos troops and you have to kill them, take out the occasional swarm of opponents or special enemies that come your way, scavenge for items like Healing Draughts, Bombs or Potions, and survive. 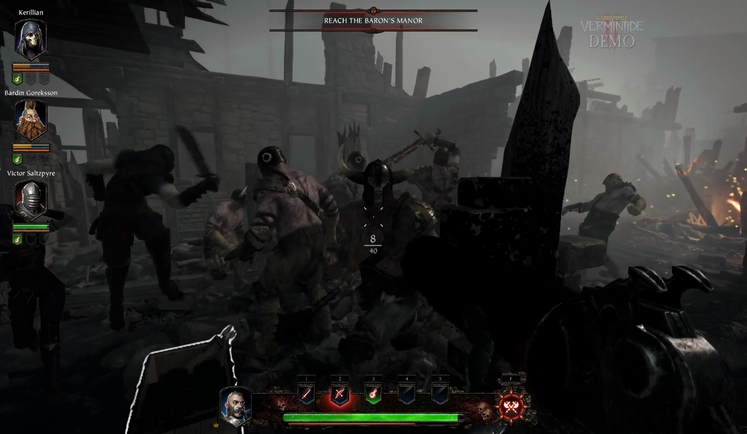 Two major things have changed from Vermintide 1, as far as I can see. Character Classes have been revamped and you can customize classes a lot more now, which I didn’t get to try out but both Kerillian and Markus played differently to how they did in the last game. Secondly, the introduction of the armies of Chaos adds much-needed variety and distances the Vermintide series even further from Left 4 Dead – while still keeping the addictive gameplay intact.

We’re massively looking forward to Warhammer: Vermintide 2, and you can see our full playthrough of the level below. Well, the time we didn’t get eaten by the Spawn of Chaos, anyway. 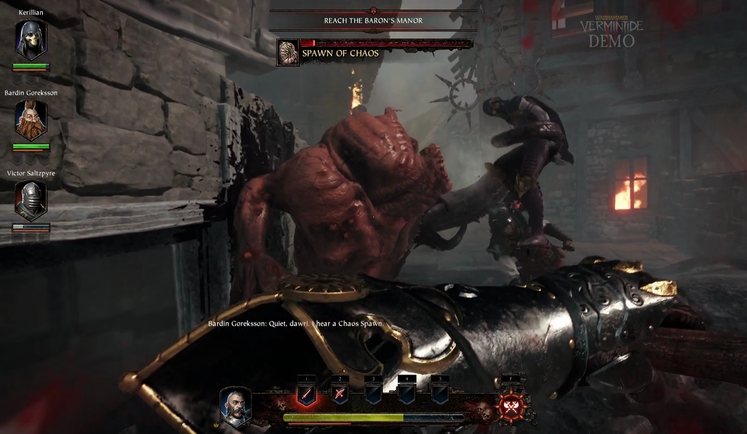 Seeing how much we can customize the characters.