Terraform Mars in this narrative driven planetary scale base builder 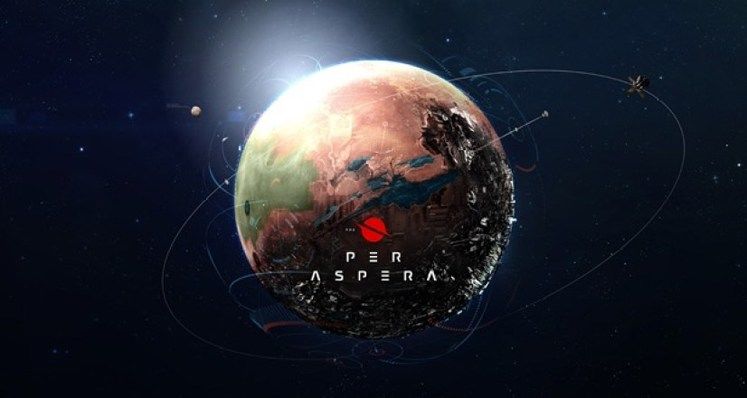 Zoom out to the planetary view and there’s something genuinely moving about the sweeping blue oceans that begin to fill the canals and craters formed on Mars, in eon’s past. The introduction of water onto the barren, desert surface of the Red Planet, feels like a kind of crossing of the Rubicon. A point through which there is no turning back and the environment of Mars has been altered… forever.

Per Aspera, by Tlön Industries, looks like just another colony builder. But it’s soon apparent that the game differentiates itself so as to warrant consideration within your gaming library; even if you already own other Mars based terraforming or colonisation titles. Whilst the game is not perfect, it carves out its own niche within the genre—focussing on both a narrative driven terraforming experience and colonisation on a planet wide scale. 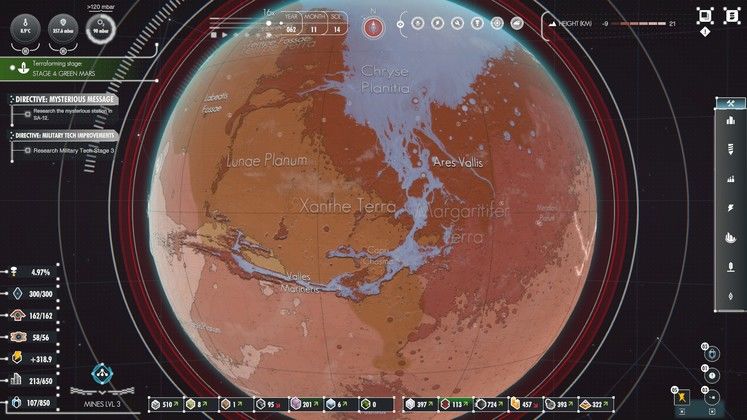 You play the game from the perspective of AMI, an artificial consciousness orbiting Mars. You have been designed for a singular purpose, to make the Red Planet habitable for humans. It’s a unique perspective. One made all the more interesting because AMI is trying to understand how ‘it’ fits into the changes taking place on the surface of Mars.

The story draws upon various schools of philosophy: exploring the nature of and interactions between the mind and body. Are the machines on the surface of Mars an extension of AMI’s body or just tools to be manipulated? It also throws in ideas of determinism versus free will. Are AMI’s actions the product of its consciousness or the result of algorithms designed to achieve a pre-programmed goal? These ideas are explored through AMI’s internal monologue, dubbed ‘reflections’, and allow the user to select responses to the questions posed. It’s engaging without getting too bogged down. But AMI’s reflections are just one aspect of a larger story. It’s one driven by choice-based interactions between various factions that you encounter along your terraforming journey. You can also forgo the narrative entirely and play the terraforming aspect of the game within a sandbox mode.

But it’s a sense of scale that is perhaps Per Aspera’s most unique selling point. The game allows you to build a base across the entire surface of Mars. There’s something visually stunning about zooming out and seeing your bases stretch out across the Martian terrain. They are almost organic like growths, following the veins of ores and resources across the planet’s surface. This sense of scale also adds an interesting perspective to your terraforming efforts. Unlike other games within the genre, you get to see the impact of terraforming initiatives on a planet-wide scale. Water levels rise and flow down from the poles over former plains. You see clouds form in the atmosphere and the carmine landscape changes colour as microbial elements spread across the landscape. 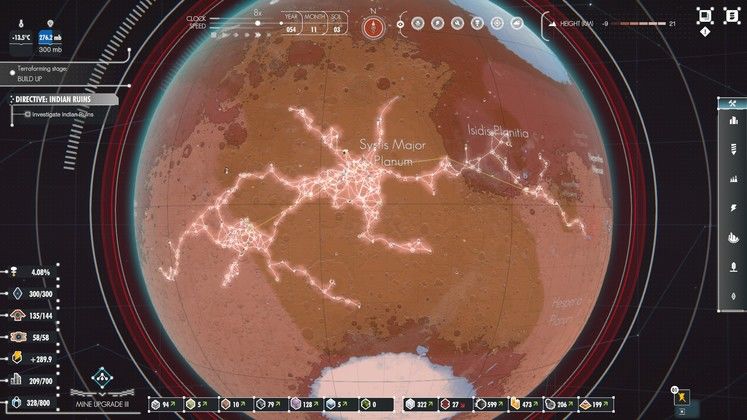 But the game is not without its faults. Per Aspera’s scope is both its greatest strength and biggest weakness. Where its macro level approach works well in terms of the global terraforming process, its colonies lack the personality found in games such as Surviving Mars. Colonists are little more than a number on the screen. In fact, I never really felt as though humans were on the planet at all. I had little connection with or attachment to them. The fact that the game treats human colonies and outposts as little more than a factory that produces research points, underscored this feeling. In Surviving Mars, when there was a food shortage, there was a genuine feeling of panic to fix the problem and protect the colonists. It’s not something I ever felt in Per Aspera. Having no food and water simply meant I needed to wait longer for a technology to finish being researched. Deprive colonists of food and water long enough and they migrate back to Earth or another colony/outpost. The game explains this away by stating that the duty of colonists is to provide technical assistance to the terraforming project. When they are provided with food and water, they will focus on research projects, advancing technologies required to fulfill the terraforming mission.

But ultimately, humans are represented at such an abstract level, that the bases you build feel altogether devoid of life. Your mines and factories, powerplants and worker hubs are all automated. Humans don’t move across the map to work in factories or farms, powerplants or shops. AMI creates a fleet of drones that takes care of all the manual labour, maintenance and logistics. Drones produce the raw materials that fuel your factories, they construct and repair damaged buildings, build roads and move goods. The colony domes and research outposts that actually house humans, are a relatively minor aspect of the bases you build. In fact, human occupied buildings are overwhelmingly lost in a sea of automated factories and mines. 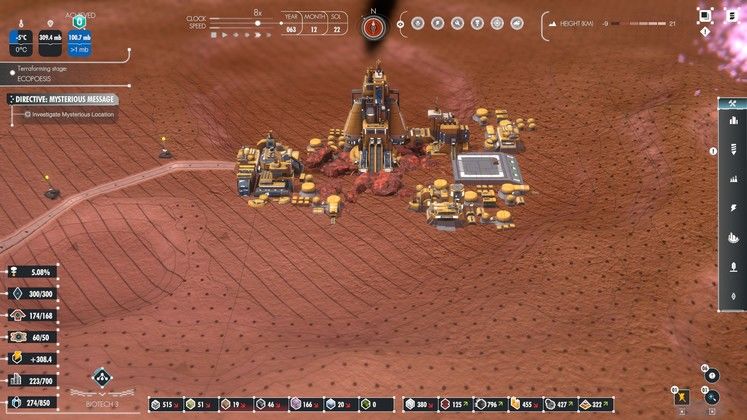 Consequently, Per Aspera can sometimes feel more like a logistics simulator rather than a colony builder. Indeed, throughput efficiency is a core aspect of base design. Yet, I never felt the need to put much thought into it, as the game rarely feels challenging—at least not on the normal difficulty settings. Despite this, Per Aspera was still a fun experience. That’s because the gameplay is smooth, the mechanics logical, the story interesting and your goals clear.

There’s also some flexibility in how you achieve your terraforming objectives. You can raise the temperature on Mars by adding space mirrors to the polar regions of the planet. You can aerobrake asteroids into the atmosphere or import green-house gases from Earth. You can melt the polar ice caps to introduce water onto the planet or use comets. Each of these choices is unlocked via the tech tree. Speaking of which, there are four areas of discovery, engineering, space technology, biology and military. 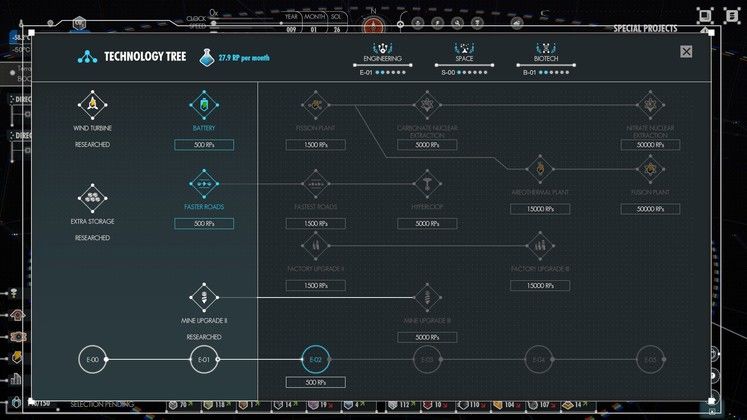 It’s also worth taking a moment to acknowledge the surprisingly good voice acting throughout the game. Troy Baker in particular, stands out. He plays Nathan Foster, the engineer that helped design AMI.

Finally, whilst I did run into a few small bugs and one game breaking story bug, the developers were quick to fix all issues via patches before release.

In the end, Per Aspera is not the deepest colony builder, nor the most challenging. But it is still a fun game to play, in a relaxing kind of way. And when you zoom out and see your bases stretch across the surface or the planet begin to irrevocably change, it delivers a feel-good gaming moment. Narrative and a sense of scale are ultimately what set Per Aspera apart from other games in the genre. If you are looking for a laid-back terraforming experience, combined with an interesting story, try out Per Aspera. If you want a more personal or detail focussed colony building experience (one where you feel like you are overseeing the human settlement of Mars), than your better off playing Surviving Mars.

Seeing the canyons of the Valles Marineris gradually fill with water and create a river system.