A harrowing journey through an impressive world 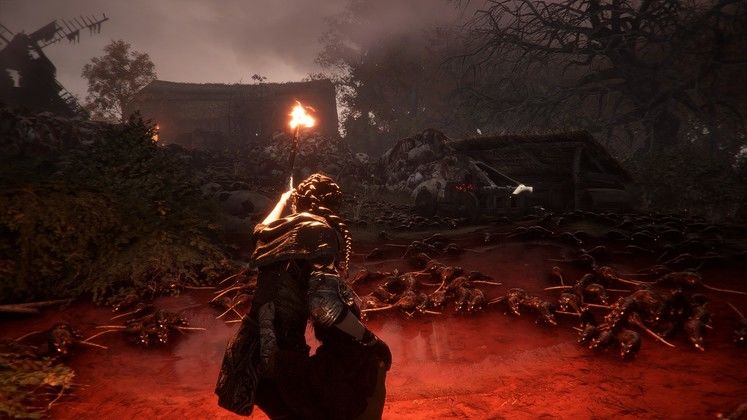 From the silent walls of a ruined castle swept over by time, to blood-soaked battlefields and ravaged villages where swarms of rats skitter, searching for another piece of flesh to bite into, A Plague Tale: Innocence excellently presents its own unsettling take on the Black Death. A masterful exercise in mood, Amicia and Hugo De Rune’s journey captivates and impresses. But where its art direction keeps a high standard, the familiar stealth mechanics and sticky controls bog down the experience.

A Plague Tale: Innocence follows Amicia and Hugo De Rune as they attempt to escape the Inquisition while surviving deadly rats that plague 14th century France. The stealth adventure is off to a cozy, familial start, which soon gets replaced with a desperate escape, the siblings getting thrown into an uneasy relationship as they struggle to stay alive. Although family, Hugo spent most of his life isolated and indoors, due to a mysterious illness and, while older, Amicia is instantly thrust into the role of caretaker as they brave a world that’s no longer welcoming. 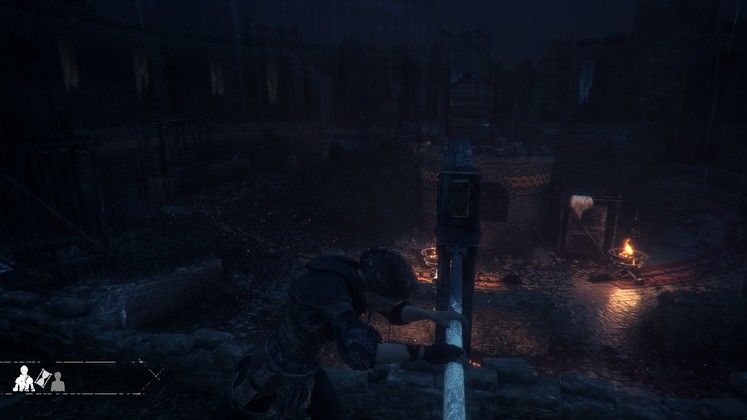 In a few distinct moments, the relationship between the two main characters shines, showcasing Hugo’s unruly nature, coupled with a lack of understanding of the world, typical of a small child. On the other side, Amicia has to forcefully cross boundaries, sacrificing innocence in order to keep them alive. For a seasoned gamer, a digital rock planted between an enemy’s eyes is nothing shocking; yet for Amicia, killing is a serious endeavor and one that, although necessary, she doesn’t easily cope with. Although there inevitably is a degree of ludonarrative dissonance in A Plague Tale: Innocence, Amicia continuously showcases uneasiness when tasked with killing, but also a dose of forced maturity that steers her forward.

As children on the run, Amicia and Hugo have to mainly rely on stealth and the big sister’s handiness with her sling. Stealth in A Plague Tale: Innocence uses all too familiar mechanics. Crouch in bushes and enemies become oblivious to you. Throw a rock at a pile of armor, or break a pot and they’ll go investigate for a brief window of time. It’s a game of observing patrol paths and playing around the enemies’ limited line of sight, while also having the choice of telling Hugo to wait in specific spots until you clear the area. By no means poorly implemented, they simply come off as rudimentary and done to death, contrasting with the excellent art direction. 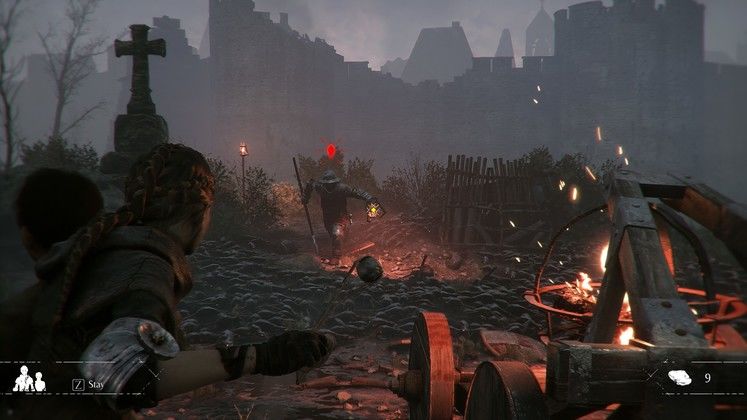 Amicia can shoot different types of projectiles using her sling, unlocking more as the story progresses. Regular rocks kill enemies with exposed heads, while other ammo heats up armor, forcing enemies to take helmets off. She can also set braziers alight or extinguish them, acting both as a distraction and a means to manipulate swarms or rats. Break a patrolling guard’s lantern with a rock and surrounding rats will quickly get rid of him. You’ll find yourself switching between them frequently enough as you progress. Amicia can also upgrade her equipment, making her more efficient, using materials spread across maps. Initially, you need to reach a workbench, but an upgrade lets you forego that.

Although picking out foes one by one using these different means builds up a fair amount of variety, it’s all done in sequences of decreasing difficulty. The trickier bits only require some trial and error, failure mostly coming down to the game’s sluggish controls and sticky movement mechanics. When multiple enemies come at you, even if they do it slowly and one at a time, wrestling with the camera while loading up and charging a sling attack is anything but fluid or easy to pull off. 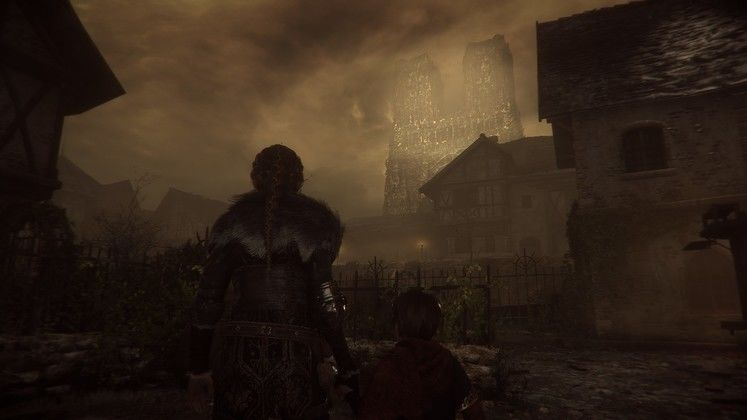 While the rather lax difficulty definitely helps in maintaining the smooth pacing, it does hurt other aspects. During the first half of the game, evading rats and adults that spare no thought before stabbing you creates a constant feeling of threat that had us craving for the brief moments of respite that A Plague Tale: Innocence doesn’t forget to provide. However, as Amicia’s options of dealing with opponents open up, she gets a bit too close to becoming yet another video game hero. While linear and featuring convenient turnouts, the game succeeds, for the most part, in presenting a pair of vulnerable children surviving through horrible situations by the few means available. However, the ease with which you can progress through later levels simply erases any sense of threat.

But what about the rats? They’re the stuff of nightmares and seeing them suddenly burst out of the ground, like some unholy force hell-bent on covering the entire land, is as unsettling as it is visually impressive. One step in this sea of deadly rodents is enough to become a meal. They do have one weakness, however: light. Torches, braziers, and anything that burns are must-haves in navigating the large number of rats that opposes you. Thus, a big part of the core loop revolves around moving from light source to light source or properly positioning them. You’ll also encounter puzzles in A Plague Tale: Innocence, although none are particularly difficult. While mechanically the rats don’t reinvent the stealth/puzzle game wheel, their sheer numbers and lethality, alongside the corruption they leave behind, turning quaint locations into veritable hellscapes, make them hard to forget. 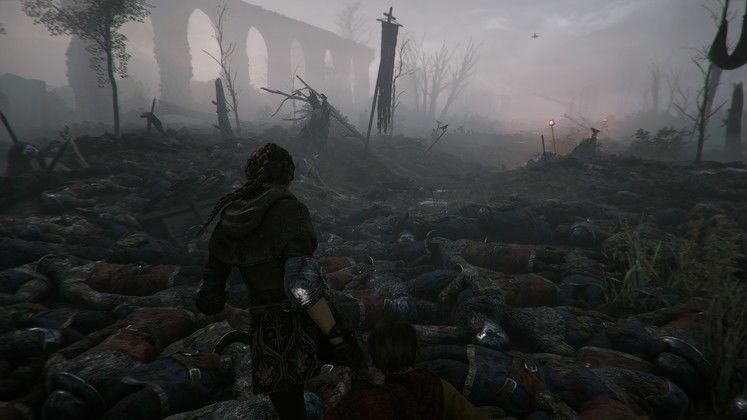 Sadly, A Plague Tale: Innocence stumbles the most during its final stretch, where the supernatural elements further kick in and the story takes a rather cliché turn. Not only are the villains insufficiently present throughout, feeling like medieval caricatures of Darth Vader and Sidious, the boss fights are the worst showcases of the game’s sticky movement and, at times, fiddly controls; we restarted them one too many times, despite knowing full well what we had to do in order to complete them.

While the title does employ specific tricks, like blurring the image closer to the edges of the screen, it’s visually stunning all throughout. It succeeds so well in shifting moods through both visuals and music that you can’t help but feel overwhelmed when silence is broken by rats bursting out of the ground around you, accompanied by screeching cellos. Its disappointing lip sync is the sole detractor here, but it’s a small piece of an otherwise grand puzzle.

The scene of crossing a battlefield, with hundreds of lifeless bodies piled over each other, only to see a swarm of rats bursting out of a horse’s bloated corpse is just one of multiple sights that A Plague Tale: Innocence inevitably etches into your mind. Although its stealth and puzzle mechanics aren’t exactly fresh, having what’s, quite possibly, the most powerful representation of the Black Death in the medium, even if stylized, is reason enough to see Amicia and Hugo’s journey to its end.

Breaking a soldier’s lantern with Amicia’s sling for the first time and watching him be mercilessly devoured by rats.