Looking to 4X a galaxy near you – but does this colonize our delights? (PC)

Space opera is the trashy TV of the stars that PC has grown up with over the decades, and we’ve come to enjoy its guilty pleasures. So how does this sequel to Armada 2525 measure up to its predecessor or those of rival operas out there giving us galactic drama? Developer Ntronium was founded by R.T.Smith, a former Creative Assembly man, and they’ve likened Armada 2526 as an unholy union between ‘Total War’ and ‘Master of Orion’. Naturally then expectation is huge.

The 4X genre has some big hitters already out in the field like Galactic Civilizations from Stardock Games, or the more recent Sins of a Solar Empire from Ironclad Games. The latter is entirely real-time in all its dealings whereas the former hugs turn-based play. Armada 2526 falls in the middle of the two much like Total War does, embracing ‘end turn’ strategy for galactic wide decisions and ‘pause/play’ mayhem for tactical space battles. Anyone worth their 4X salt will immediately feel the vibe of star spanning empires when you fire Armada up as it stays true what matters.


You begin a game with a simple planet to call your ‘civilization’ and a few ships. You’re a fresh faced, spotty adolescent empire with everything to prove and there are others out there with designs for multi-story car park planets just like you – so it’s a race to get in there first. You know the drill; explore the galaxy, expand your territory, exploit some resources and exterminate those neighbours. Each of these games is entirely in your hands as no set mission scripts bog down rival empires with set stances or actions to take, so it matters in all the choices you make along the way. This is the ultimate goal of many such games and if done right it can lead to some amazingly tense fun.

First off Armada 2526 does like to do some things differently and so a tutorial is included to get you acclimatised to Ntronium’s way of thinking. Some immediate points to keep in mind are that your galactic ships are kept on a leash determined by the influence of your nation, meaning you can’t go flying off into unclaimed space. Ha – but you can (what a twist) because thanks to diplomacy you could get real chummy with a neighbouring race and set up special arrangements like using their planets as ‘refuelling stations’ if you will to let you move further out, and vice versa. The affect of this means that sometimes you need to expend resources claiming a crappy planet in order to score a much better one now that your starships can reach the system; they’re like choke points. Stars can be different types which signify the likely hood of finding a decent habitable planet or a barren rock that will take some advanced colonization tech to make any use of properly.

The turn-based starmap is built on rows of squares that are offset so it feels a little hex-y. Each turn of course executes both the decisions you have made and that of the other empires out there so in games that have been going for a while a mistake can have severe consequences. Imagine you’ve parked that jumbo fleet of yours on the other side of your territory because you suspect that annoying foe of yours intends to gobble up your favourite new colony only to find them pummelling the opposite end of your mighty civilization. Yes it can happen, and yes it’s annoying to realise how foolish you’ve been. 4X games, particularly of the turn-based variety, are punishingly unforgiving of such mistakes and Armada 2526 is no exception – but that’s the thrill of the game.

Before any real drama kicks off you’ll need to focus on the more basic struts of your nation, i.e. infrastructure. Planets and their capacity for buildings and industry are determined by their population level, a mechanic shared by many other titles in the genre, but in Armada importance is placed heavily on spreading out your populace across the empire. As the turns fly by you’ll likely be choosing what facilities to erect and where, like upgrading a colony’s industry so they can construct bigger buildings in the future or develop their space port for starship manufacturing. There’s also research to keep a keen eye on which is determined by research points that are produced by various specialised technology centres. Aside from the usual suspects of bigger weapons, meaner ships and fancier shields – you can also look into cooler stuff like bio-engineered squid ships “mated” with a hyper drive... yeah! How about something more practical like psychic civilians who detect fleets in orbit above their worlds? Screw it; let’s get some teleportation nodes set up for instant travel.


Yes the Ntronium team obviously had some fun with the technology you can invest in, but it’s also another strategic element to keep a close watch over. While you can opt to research multiple fields at once it comes at a cost as individual techs will take much longer to see finished and ready for application. To help combat this you can upgrade standard research centres into specialised ones like weaponry, shields or bio-engineering though they can only help toward their set field. Each building that can produce something will have its own build queue so multiple space ports mean you can churn out a fleet much faster if you have the cash to spend.

Speaking of money; you’ll be responsible for setting taxes and even sorting out immigration and emigration policies, although these can be automated so you needn’t have to worry about them. Population management will always be in your mind though as Armada 2526 serves better when you spread out your civilians by way of transports to your new outlying colonies. This helps each new planet grow faster in terms of strategic use and how much tax they can produce for you. You can set up these transports to ferry people between worlds for either a set number of trips or indefinitely, which also applies to any other ship you send out to another system.

In the beginning your ships will only be able to travel to other planetary bodies but eventually, providing you’ve got your scientists to do their homework, you can send out fleets to move into open space, which would be great for setting up ambushes. Tech will also eventually let you change the orders of a fleet once they’ve disembarked as otherwise you need to wait until they arrive at their destination before reassigning them – signal strength is a b*tch in space you see. Early movements of your military are therefore vital and extremely perilous to your empire’s future, if you start sending them on frivolous joy rides around the galaxy, prepare for likely comeuppance. Of course you *could* decide to make friends with your neighbours... it’s just a thought.

Diplomacy has a nice array of flavours in this Armada sequel, with options like offensive or defensive alliances to help you and your allies feel a little safer out in that big void of space. You can do the usual stuff like trade money, technology, colonies, ships and even information. For extra spice you can also deliver with those a threat, an ultimatum of war or be cheeky enough to ask for something as a favour. The AI does a good job of remembering just how honourable you are about agreements or how savagely treacherous and back-stabbing you enjoy being toward them.

War, what is it good for? Getting more stuff – simple. Space battles in Armada 2526 are all real-time conflicts and while you don’t order ships to target individual foes you will be responsible for overseeing the tactics they use and their formations. You can pause the battle at any time to take stock of your fleet and the options open to you. You get three viewpoints to go along with it - global, ship or sight which lets you see the whole battlefield, from orbit around a ship or through their eyes. If you don’t feel like taking control of the fleet then you can designate the AI to handle it for you, to let you sit back and relax as you watch expensive starships pound each other. Retreats are costly for those who decide to cut and run with their tail between their legs as you can only leave via set points, and large fleets take time to jump away leaving vessels vulnerable.


All these features are woven together through Armada 2526’s user interface, which unfortunately plays the part of the Achilles’ heel compared to the rest of this space empire builder. It’s by no means a game breaker but it only delivers a standard ‘okay’ affair when dealing with everything. Certain elements could be made much clearer, like research and what it specifically unlocks or does, or where your fleets are positioned on the starmap and how many are in them for quick passing glances. This is a game that inevitably throws more at you to juggle as the empire’s border expand so speeding up information getting to the player is critical but a weak spot. It does sport a rather cool looking cursor zoom feature but in the end it does little to offer strategic benefit.

Overall the UI is the weak link in the chain which is tragic as it brings down the other areas of Armada 2526 like production, colonization management, research and even just admiring your galactic civilization. Fortunately though this is a game that can benefit from future updates from the Ntronium team and so hopefully these issues can be washed away by community feedback. Only the presentation holds back the game from truly reaching out to the stars. For a 4X strategy title it hits a lot of the sweet spots you want and is a great entry for anyone who wants to give running a star spanning empire a whirl.

How could my top moment not be rolling out my first hyperdrived Squid monster into space? It was destiny. 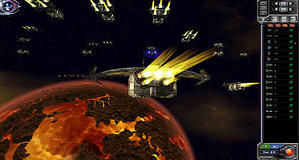