We can vividly recall being fully absorbed by the hype surrounding the original Assassin’s Creed, following the game’s progress with slavish devotion, soaking up the screenshots and trailers, feverishly imagining how amazing it would be to play when we finally got our hands on it. And while the reality of the finished product only partially managed to live up to expectation, Assassin’s Creed was still an excellent game, regardless of how repetitive and limited its missions turned out to be.

Ubisoft Montreal left plenty of room to build upon the core concept established in Assassin’s Creed, developing their burgeoning modern day story of Desmond, a test subject who is made to regress back in time to former lives through the Animus. Assassin’s Creed II begins where the last game left off, with Desmond still confined to the Abstergo laboratories, staring at a wall of indecipherable code.


After a hasty escape from Abstergo with Lucy in tow, it’s not long before you’re willingly lying back on an upgraded Animus (or Animus 2.0 as it’s now known), ready to delve into the life and times of yet another assassin. The assassin in question is Ezio Auditore da Firenze, a young nobleman living in Renaissance Italy amid great political turmoil, brutal violence and emerging transcendent art.

Unfolding over thirty years, Ezio’s story is far greater in scope, seeing the young petulant noble suffer through family tragedy, taking him on an epic quest for vengeance as he adopts his father’s mantle of master assassin. While the transformation from immature teen to super assassin seems awfully quick and more than a little unconvincing, there’s no disputing how much more fluid and satisfying to control Ezio is when compared to his medieval predecessor, Altair. And the way in which you’re gradually eased back into the action and granted new abilities is brilliantly executed.

Ezio is a superior climber, better fighter and more athletic customer capable of limber acrobatics as he leaps and bounds across the terracotta-tiled rooftops of Florence, Tuscany and Venice. Your protagonist isn’t the only aspect of Assassin’s Creed II to be expanded since the previous game though – every single facet of the game has been enhanced to an astonishing degree, far exceeding our expectations by a considerable margin.

Not only have the fundamental mechanics been refined, making ACII a more pleasurable experience than the first game, but the sheer depth, breadth and variety of activities on offer is utterly staggering. Repetition is certainly no longer an issue as story-driven objectives are delivered in a far more organic way, making standing around and enduring lengthy cut-scenes a thing of the past. ACII’s narrative moves with a greater sense of pace than before, drawing you inexorably into its rich and detailed world.


Renaissance Italy itself is a glory to behold – a stark contrast to AC1’s cold grey and blue alleyways – Assassin’s Creed II’s regions are liberally draped in a startling palette of warm, sun-kissed hues all rendered in intricate detail. Synchronising your first viewpoint is every bit as breathtaking as before, if not more so, showing off the incredible draw distance and immense scale of the environments. Shadows and lighting are spectacular too, as are the overall visuals – a substantial stride forward from AC1, especially in its character models – lending a genuinely evocative sense of time and place to each of the game’s locations.

ACII’s Italy is not only home to Ezio’s story-led missions, but a host of other distractions, like courier deliveries, races, viewpoints and non-story related assassination contracts. Item collection still features heavily, but is nothing like the 400 or so flags you had to gather in the first game for apparently no reason whatsoever. Locating hidden glyphs, codex pages and seals all contribute towards ongoing puzzles. The collectibles are meaningful and actually unlock worthwhile extras all of which are proudly displayed at your family villa in Monteriggioni.

The villa in itself is an ongoing project that gives you something to sink vast amounts of your hard-earned currency into, whether you’re purchasing art or renovating your property, you’re always contributing to the cumulative value. Since Renaissance Italy represented the emergence of banking, there’s an entire economy at work in the game, featuring dozens of ways to earn florins and hundreds of things to spend them on, repairing your dilapidated villa and the surrounding town just one of many. Upgrading your armour, weaponry or dyeing your robes provides extra incentive to accumulate cash as you’re able to almost fully customise Ezio’s style to suit you.


Still the crux of the game remains in the assassinations and with the array of weapons and new combat opportunities available to you, the number of methods you can utilise to dispatch your targets is massively increased. Abilities such as aerial assassinations, ledge kills, poison blades and more give you a greater variety of options, some of which are unashamedly cool. We dare you not to smile like a loon the first time you dive from a building, thrusting hidden blades into the back of two guards’ heads in one smooth, seamless motion, for instance.

Assassin’s Creed II is something altogether unique in its uninhibited size and wealth of ambition, few games managing to measure up in terms of depth and detail. The development team at Ubisoft Montreal has gone far beyond what we’d normally anticipate from a sequel too, delivering not only an unreservedly brilliant and compelling follow-up, but one of the finest games we’ve ever played. Boasting a suitably grand soundtrack, majestic aesthetics and masterful level design, Assassin’s Creed II is everything we could have ever wished for and so much more. Forget Modern Warfare 2, Assassin’s Creed II is without a doubt this year’s biggest and best.

Assassin’s Creed II is something altogether unique in its uninhibited size and wealth of ambition, few games managing to measure up in terms of depth and detail. The development team at Ubisoft Montreal has gone far beyond what we’d normally anticipate from a sequel too, delivering not only an unreservedly brilliant and compelling follow-up, but one of the finest games we’ve ever played. Boasting a suitably grand soundtrack, majestic aesthetics and masterful level design, Assassin’s Creed II is everything we could have ever wished for and so much more. Forget Modern Warfare 2, Assassin’s Creed II is without a doubt this year’s biggest and best.

Discovering how much more there is to do and how unendingly vast Ezio’s world is. 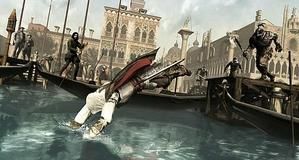