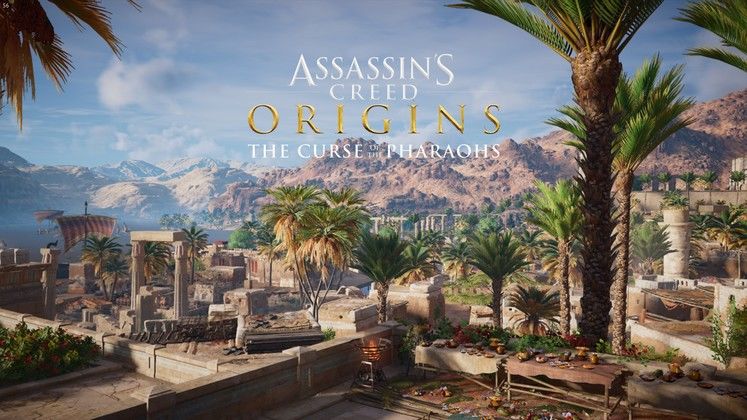 Curse of the Pharaohs, the second and final expansion for last year’s Assassin’s Creed: Origins is a rather drastic departure from the series’ previous tendency to be mostly grounded in realism with a pinch of sci-fi conspiracy flavor added to it. Depending on how much thought you’d assume the developers put into the effect of this DLC on the wider lore, it’s either a wacky “what-if” scenario of questionable canonicity or an element of the overarching storyline with far-reaching implications.

In terms of gameplay, it’s the same fare as the main game and the Hidden Ones was. Combat is unchanged, and you’ll still be traversing the same kind of terrain between question marks strewn about the map with the same set of random activities. You have your forts, your treasures and animal lairs. The size of the map is significantly smaller than the main Egyptian map, but larger than the Sinai in the previous DLC, and is roughly the size of the one found in Brotherhood by my estimates. As you explore the map, occasionally one of the disturbed Pharaohs will appear in a random location. These encounters function as mini-boss fights which are fairly challenging, and all four Pharaohs have their unique models, weapons and attack patterns. Killing them in the real world only temporarily banishes them back to beyond the grave, but doing so earns you XP and, more importantly, a new kind of crafting material which can only be acquired like this, or in the afterlife, and is necessary for the new upgrades. 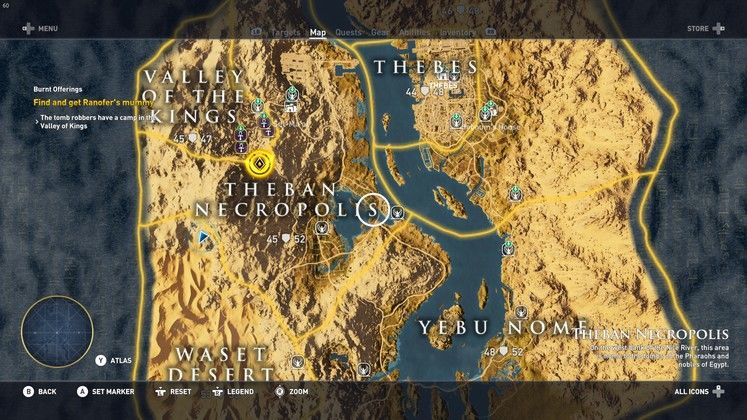 Not pictured are the four afterlife maps

That is, of course, not counting the four additional areas which make up the afterlives of the four cursed Pharaohs. These add a whole lot more to raw map size in addition to providing a kind of diversity in biomes that wasn’t present in the main game, the Hidden Ones, nor the real-world portion of this DLC either. The four undead Pharaohs - Nefertiti, Akhenaten, Ramesses and Tutankhamen - each have a unique take on what the afterlife is like, all drawing from representations in actual ancient Egyptian myth, ranging from the field of reeds through an idyllic, spotless city with a huge golden sphere floating above it, a valley filled with magical blue lotuses to a barren desert hellscape with constant sandstorms. These are the true stars of the DLC - while Thebes and the surrounding area are beautiful, they’re much the same as what we saw in the main game. 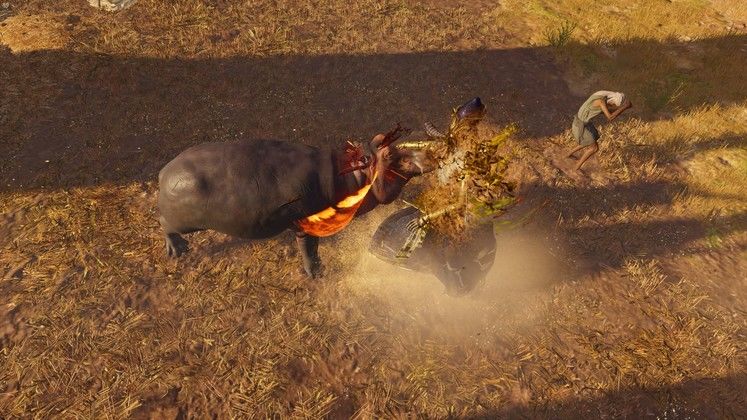 In these afterlife areas, which are compact open worlds in their own right, you’ll get a variety of the usual question mark activities alongside a new kind, which is an alternative take on the usual papyrus puzzles. Additionally, here the enemies you will face are half-jackal hybrids resembling Anubis, mummies, giant scorpions and the Pharaohs themselves. The storyline will take you through them all, and after the first time you visit one, Curse of the Pharaohs’ variant of the Phylakes will appear in the normal world as Shades of Anubis who roam around trying to kill you for trespassing in the afterlife while still being alive. 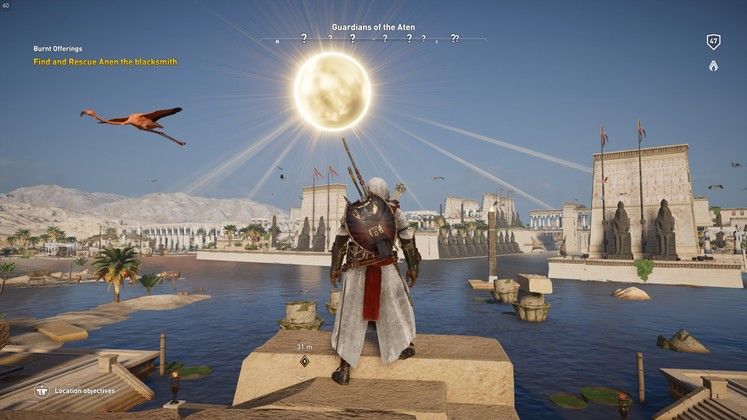 All things considered, Curse of the Pharaohs has a lot more content to show for itself than The Hidden Ones did, and the afterlife areas bring much needed variety to the terrain we’ve been exploring for one game and two expansions now. And yet, I feel like the order of the DLCs should have been reversed. Curse of the Pharaohs is the last piece of content Origins is getting, but it isn’t really a part of Origins, or its story, whereas The Hidden Ones is a direct continuation of the plot, and possibly leads on into the sequel. Curse is more like a spin-off, and has no ties to the main story at all. If not for the level requirements, you could play through this midway through Origins and there wouldn’t be any plot discrepancies, whereas the same cannot be said for The Hidden Ones.

There’s also that elephant in the room which I brought up in the opening paragraph. The storyline in Curse of the Pharaohs is interesting, but has absolutely nothing to do with Assassin’s Creed. At all. In any capacity. You’re not really doing assassin-y things, you’re not fighting against the Order of Ancients/Templars, and you’re not contributing to the overall story of the franchise. Plus, the realistic setting of the series so far has been tossed up for zombie pharaohs, mythical afterlives and giant scorpions.

Now, without spoiling anything, all this mythical nonsense is explained away with the pieces of eden, the deus ex machina convenient macguffin plot devices which have been around since the first game. However, (and also without spoiling anything since this isn’t addressed and is thus mostly speculation) they’re not an apt explanation. This DLC is a huge, convoluted lore-problem for the entire IP if it really is canon. Now, either the whole thing is a piece of eden induced feverdream that doesn’t actually happen, or canonically, in the Assassin’s Creed universe, the ancient Egyptian idea, and really, their entire belief system, is the one which is actually real. 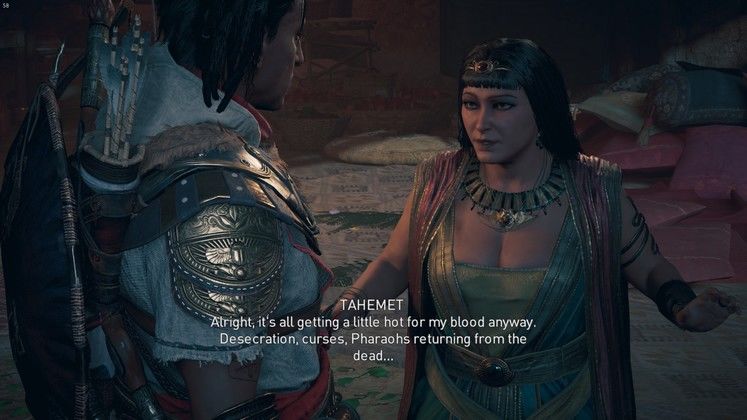 You and me both

See, unless all the conversations Bayek has in the DLC, all the Pharaohs appearing, all the faffing about in the Duat is a fabrication projected into our brain by these artefacts, Bayek did, actually, physically go into not one but four versions of the afterlife, talk to people there, and take them objects from the real world. In the lore, the pieces of eden have some pretty impressive powers, but willing an entire mythology into physical existence isn’t among them. I do hope Ubisoft addresses this somehow, possibly by making it so that the members of the Egyptian pantheon were from the Precursor Race who made the pieces or somesuch, otherwise as far as Assassin’s Creed is concerned, in-universe the ancient Egyptian religion is the one true religion. But!

But. Even the game cannot make up its mind. Akhenaten was posthumously considered a heretic because he tossed aside your standard helping of Egyptian gods in favor of Aten, the sun-disc. This is quite often discussed in Curse of the Pharaohs too, which makes it doubly weird that his afterlife aligns with his personal beliefs, while the other three line up with the traditional ancient Egyptian belief system. So, in the Assasin’s Creed universe, both are true? How does that work?

Do forgive this tangent, however for long-time fans of the series who might view this DLC as more than just a fun little mythical romp might be bothered by this as much as I was. Lore issues notwithstanding, is Curse of the Pharaohs fun and worth the asking price? Absolutely. Both Origins and The Hidden Ones were heaps of fun to play through and explore with beautiful worlds, fun activities, great combat and well-written plots. Curse of the Pharaohs is just more of all that, plus the additional variety of the four afterlife worlds which are a joy to discover, lore be damned. 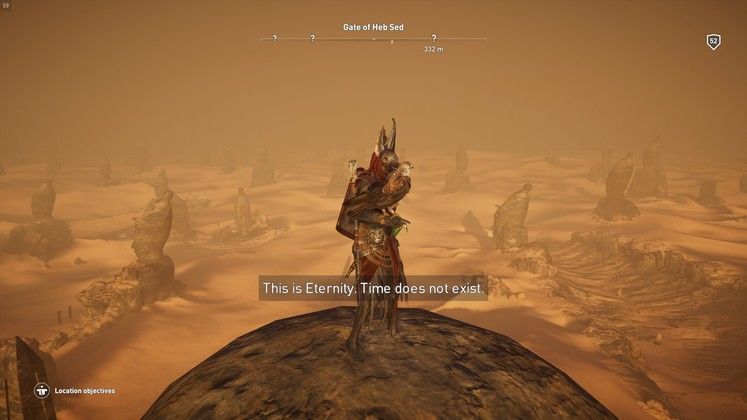 Neither does consistency, apparently

Don’t let my lengthy rant about the overarching lore fool you - Curse of the Pharaohs is a fantastic, content-rich DLC which takes what already worked well, added a few twists and turns, and gave us more of it. This is a solid ~15-20 hours of content if you’re a completionist and explorer with some unique and otherwise underrepresented settings.

I didn’t quite know what to expect from the depictions of the afterlife(s) in the game, so when I first ventured into Akhenaten’s tomb and emerged into a pristine, idyllic, near-utopian Egyptian city rising out of the Nile with a huge golden sphere hovering over it, I was completely awed, and that feeling repeated itself the other three times as well. 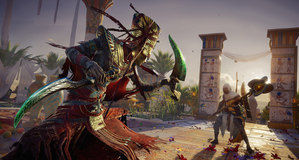