The ultimate PC RPG returns, but is it too little too late for Baldur’s Gate?

Bloody hell, I’m reviewing Baldur’s Gate. Did you know that Bioware’s classic RPG came out the same year as Half-Life, Metal Gear Solid, Legend of Zelda: Ocarina of Time, Resident Evil 2, Grim Fandango, Panzer Dragoon Saga, Unreal and Thief: The Dark Project? I think 1998 pretty much goes down as the greatest year ever for gaming. We’ve had amazing remakes of both Half-Life and Ocarina of Time in the past year, so can Baldur’s Gate arrive in 2012 with the same power?

This is going to be a review of two parts in many ways, with the score somewhat an average of both. On one hand I’ll be reviewing Baldur’s Gate, a 14-year-old game regarded as a classic to see how well it holds up today, and on the other I’ll be checking out how well Beamdog and Overhaul have updated the game to see whether it’s worth you getting this version if you already own Baldur’s Gate.

The recent fan update to Half-Life, Black Mesa, completely changed the game, but the likes of Ocarina of Time 3DS and Secret of Monkey Island: Special Edition kept the core the same but updated the visuals and audio to modern standards. What side does Baldur’s Gate: Enhanced Edition fall under? I’ll tell you later – game first.

Baldur’s Gate, for the four of you who don’t know, was Bioware’s first RPG and the title that would put their name on the genre. Set in the Advanced Dungeons & Dragons world, specifically the Sword Coast, Baldur’s Gate tells the story of an evil warlord called Sarevok who is inexplicably tracking your player character down. After murdering your mentor Gorion your character travels across the Sword Coast trying to find out why, recruiting a band of adventurers to defeat enemies, loot dungeons and uncover conspiracies. And that’s all I’m going to give in terms of story, since a big part of the game’s appeal is in uncovering the plot against you and the various side-plots that are involved.

The game itself is an isometric (that’s “top-down” for you lay people) RPG set in pretty much an open world, where tactics play a great deal to your success in battles, as does managing your six person team, and choices can see allies turn against you or quest-givers snub you. It’s also bollocking hard, blisteringly unfair and full of mysteries even the manuals don’t reveal.

How do you learn magic spells? How do I resurrect dead party members? What is “THAC0” and “1d9”? If you’ve come straight here from Dragon Age: Origins and have never played an AD&D game in your life prepare to be frustrated and angry for much of the game’s opening hours. And yes you’re not doing it wrong, it does take utterly ages to level up.

Persevere though and maybe you’ll realise just how long you’ve been playing without a break. It’s the world and the writing that makes Baldur’s Gate so revered, and most believe this is Bioware at their peak. The many characters that populate the game feel less like the slightly mouthy archetypes that modern Bioware tends to go for and more like writers just going wild and having a blast. How else can you explain a barbarian whose special ability is his pet hamster?

Every other line feels like comedy gold, and thanks to the wonders of text (there’s only a bit of voice acting here) there are a lot of great lines. Music is atmospheric and compelling. While the challenge is high the “just one more go” feeling is even higher. Baldur’s Gate is an amazing adventure, that if you can put up with the overhead perspective, not having voice acting everywhere, slightly baffling AD&D rules and desperately unfair difficulty levels (hey, that’s old-school) you’ll find yourself hooked fast and cottoning on to what every RPG fan has known since 1998: Baldur’s Gate rules.

All this is true of the original however, and we’re not reviewing the GOG release here. Why have I spent so long talking about the original game? Because that’s pretty much exactly what you’re getting. Those other remakes I mentioned at the start? Get those out of your mind right now.

This Enhanced Edition has some new features but otherwise it’s just a higher resolution version of the same pixelly game RPG players fell in love with in 1998. The locations are generally nice but nothing compared to the mad designs of Baldur’s Gate II or Planescape: Torment, and those were a decade ago. There are no graphical updates here any player couldn’t have done with a quick trip to the GOG forums and a few simple mods. The zoom function’s nice however.

So what does this so-called “Enhanced Edition” bring? New characters for a start, such as Dorn Il-Khan the half-orc Blackguard, Neera the Wild Mage, and Rasaad yn Bashir, the doctor aboard Deep Space Nine (kidding, he’s a monk actually). Rasaad’s performing in Nashkel and is simply approached, but both Dorn and Neera get more dramatic introductions that start their own quests (although I nearly missed Neera, she’s fleeing from pursuers in North-East Beregost).

Dorn’s an evil sort, Rasaad seems a little boring (although that’s probably a façade), but Neera seemed really fun so I signed her up. Her spells can be really powerful, but also unpredictable: they can often hurt her as much as an enemy. These three fit well into Baldur’s Gate, so much so a new player wouldn’t realise they weren’t in the original game. They’re all written well, particularly Neera who’s a delight, and that’s the most important part.

A major gameplay addition is The Black Pits, a separate Horde-style mode where you can customise any six characters you like and put your tactical mind to its breaking point. It’s fun, but unless you’re a major fan of the AD&D battle system you’ll overlook it completely. It’s a neat bonus but not a reason to buy the Enhanced Edition.

Elsewhere the interface has been overhauled to make it look more like the sequel’s, but while great this was already modded in years ago, as was widescreen and modern PC support. My personal favourite addition are the new cinematics, which replace the basic CGI of the original game with stylized Thief-like cutscenes. I think they’re immensely cool, although not to everyone’s taste perhaps. At least the new tutorial is useful, gently introducing new players to all the game’s features (and major characters) in a way the original really should have.

Finally the Enhanced Edition was supposed to round up and quash all the bugs from the original game, but frankly I’m not seeing it. I’m sure Overhaul have done a lot of work, but there are a lot of major bugs still there – pathfinding is still atrocious for example, with characters getting stuck everywhere, and one time I had to reload a save because I couldn’t escape out of an inn.

They’ve even added new problems. I’ve personally encountered a major bug that a lot of people seem to have experienced where touching armour in your inventory (quite a common thing to do!) makes the mouse pointer disappear, consequently making the game unplayable. Then there are stupid things, like how you can’t load a save from the title screen and that it takes a full five clicks to exit the game. I’ve even heard there are problems with the THAC0 system, which is a really major thing if true (very hard for me to check into though).

And that’s pretty much it. Should you buy Baldur’s Gate: Enhanced Edition if you own it on GOG? Probably not. A few optional characters, a Horde mode, and a few built-in modifications do not a Really Special Edition make. You should absolutely play Baldur’s Gate if you don’t mind isometric RPGs that give you a real challenge, since the writing is still amazing and both the world and combat system are still really deep and engrossing. This may be the one to get if you don’t own a copy, but it still needs a few more patches, a Steam release and a price drop before I can wholeheartedly recommend it. Nevertheless, a classic game given a questionable buff is still a classic game. Butt-kicking for goodness, indeed.

And that’s pretty much it. Should you buy Baldur’s Gate: Enhanced Edition if you own it on GOG? Probably not. A few optional characters, a Horde mode, and a few built-in modifications do not a Really Special Edition make. You should absolutely play Baldur’s Gate if you don’t mind isometric RPGs that give you a real challenge, since the writing is still amazing and both the world and combat system are still really deep and engrossing. This may be the one to get if you don’t own a copy, but it still needs a few more patches, a Steam release and a price drop before I can wholeheartedly recommend it. Nevertheless, a classic game given a questionable buff is still a classic game. Butt-kicking for goodness, indeed.

While Minsc and Boo win most awards, my personal favourite is encountering an annoying mysterious hermit in the forest and having the option to have a massive rant at him about cryptic quest-givers. Laughed my arse off. 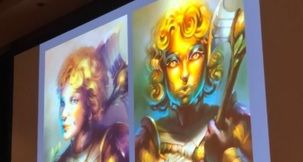 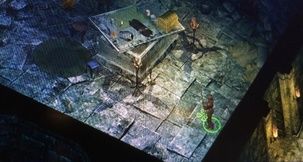 Beamdog confirms it's working on a new chapter...