A futuristic-themed crisp, clinical and creative addition to the ever-growing indie stock of great modern roguelikes

Arcen Games may well be tiny but they certainly can come up with some pleasantly curious ideas. These are the guys, after all, who brought us the bizarre concept of a strategy game where you fight against yourself – Skyward Collapse – and the highly-acclaimed RTS/4X/tower defence hybrid – AI War: Fleet Command . Thankfully, in addition to being quite oddly named, Bionic Dues does not at all threaten to disappoint our expectations. Instead it continues the trend of stylish and interesting roguelikes peppering the indie-scene, and it does it with all the imaginative design we would come to expect from developers like these.

You play the role of a rookie mech pilot tasked with protecting a futuristic mega-city from a sudden robot rebellion. Having four specialised mechs at your disposable, you have 50 days to perform missions which either strengthen your crew or weaken the enemy, before facing off a final massive attack wave in your HQ to end the game. A failed mission means a wasted day and the enemy grows in number and strength whilst you gain nothing. As time goes on, missions increase in difficulty due to the enemy level-ups; thus mimicking the ongoing arms race between your mechs and the belligerent AI mobs.


The game embraces RPG-like mechanics and allows several levels of customisation. Firstly, you may choose from a selection of mech pilots who have varying gameplay bonuses; for example, higher quality loot or economic discounts from the item store you can access in-between missions. Secondly, you may select the four mech classes which will make up your team. These range from heavily armoured high-damage short-range tank-like units, to long-range weakly-shielded snipers, to specialised science mechs. Each mech has a different selection of weapons available of the kind you would expect to see.

Your mechs are primarily improved over time by equipping them with the items you loot, earn or buy. In traditional dungeon-crawl form, items are named according to their level and bonuses, and colour-coded according to their degree of rareness. Additionally, they come in various types which fit in the corresponding specialised slots on your mech’s load-out. These include various types of weapon-slots, shield-slots, computer-slots, etc. The system more or less mimics a Diablo-style paper-doll with some items being similar to various types of armour or weapons and other types operating more like rings or amulets.

However in Bionic Dues this system is further complicated by the fact that each item has a power requirement which limits the number of high-level items a mech can utilise. This upper-limit can only be increased by equipping a certain type of reactor item which, rather than consuming power, produces it. Your mechs don’t actually level-up, and this system replaces that standard RPG mechanic. The overall effect of all these complications in total, coupled with the abundance of loot which improves upon the items you already have, has the effect that it becomes a little hard to care about absolute min-maxing of your mechs’ load-outs. That is, at least, until towards the end of the game when topping out your damage taking or damage dealing abilities starts to matter more.

The majority of gameplay happens within the missions. These very much take traditional roguelike form; a basic-sidebar accompanies a top-down futuristic tiled-floor dungeon map. Each mission has a simple objective such as blow up all the control-station-things, reach the exit-point, or kill all the enemies. Your limited sensor range, which varies from mech to mech and can be augmented with certain items, only allows you to see a small section of the map. This leaves much of the map unexplored at first.

The apparently randomly-generated maps are filled with item-crates, traps, obstacles, enemies, and, of course, your objective. In addition, loot is hidden behind locked doors which can only be hacked open with a special mech-skill normally best-performed by the science mech. In this busy environment line-of-sight becomes crucial, allowing for either tactical destruction of, or hiding behind, obstacles.

Enemies are seen as either deactivated – as in, they have not noticed you yet – or activated – as in, they are coming for you. In a rather masochistic twist, the opponent bot-types are often deliberately flawed in such a way that they can prove just as damaging to their team-mates as they can to you. For example, the often suicidal ThunderBot shoots explosive ammo at near-by cover, frequently causing mass death to other bots nearby. Not all the enemy load-outs are so crippled, however, as the HunterBot’s speciality allows it becomes active the moment that your sensors are able to sense it; thus meaning that a mech with long-range sensors can end-up unwillingly waking a large group of them at once.


Although the game functions in turn-based form, it generally plays quite rapidly as most situations allow and even encourages the player to make moves hastily. This kind of attitude can later prove fatal when a deadly BombBot is accidentally allowed to get far too close for comfort. The gameplay is such that it consistently creates the beautifully ironic why-the-hell-did-I-do-that and oh-my-god-I-am-so-dead moments that roguelike players have come to know and love/hate.

In general, Bionic Dues is incredibly well put-together. Every gameplay mechanic is so openly explained in tooltips that absolutely everything can be calculated if so desired. The game’s tutorial popups are slick, well-written and comprehensive. The options menu is impressively detailed for such a simple game engine; including not only the obvious – such as a comprehensive range of graphic options and keyboard mapping – but also the extravagant – such as controlling the intricacies of how the mouse-zoom functions. Overall it’s impossible not to notice that this game has received pristine attention to detail.

On top of that, the game comes heavily-equipped with a fantastic sense of humour. Everything from the enemy descriptions to the mission briefings are written with the attitude of a winking-smiley and I frequently laughed-out-loud as I read through them. This only backfires in the form of the comedic enemy death-cries, which although entertaining at first soon become rather repetitive and thus somewhat irritating.

The 2D graphics are little-more than functional, nevertheless the techno-futuristic style does have a certain charm. The benefit of having this kind of setup, of course, is that Bionic Dues will run smoothly on just about every PC which is actually able to start up. The audio, on the other hand, is a definite cut above the norm. The in-mission music reminds of early-90s midi classics, and the menu music, despite being a bit amateurish, has a certain indie-band charm. The voiceover quality matches that of the music, after each mission a very cool deep-throated narrator gives a mini-rundown on how things are going.

The game offers a good selection of 6 difficulty settings which range from casual to an aptly named misery; a popup tooltip describes the exact effect of each setting in as much clinical detail anyone would ever want. As if that wasn’t enough, an additional hardcore mode checkbox sits enticingly below the difficulty slider; taunting the player by promising to overwrite your only permitted save-slot any time something really embarrassing happens.

Bionic Dues is a grower. At first the game seems both overly-complicated and too easy; but with a handful of missions done it becomes glaringly obvious that such assumptions were quite wrong. You quickly learn the mechanics and simultaneously the difficulty picks it up a notch, providing just the right level of challenge to be enjoyable but not frustrating. By the time you take your first full game to completion, approximately 8 hours in on normal difficulty, you’re enthused about upping the difficulty and putting together your subsequent team of mechs for a second play-through.


On the negative side, I must admit that the complete lack of both endgame statistics and a decent story-line closure was pretty disappointing. I did also once manage to get the top-down camera lost deep within the fog-of-war and had some difficulty finding my way back to my mechs; providing mild frustration. Finally, it’s worth mentioning that although there is a storyline of sorts accompanying the game, it’s far too weak to be the player’s primary motivation to play on.

Putting these minor gripes aside; if you can’t tell already, I really like this game. Indie devs don’t always come up with the goods, but Arcen are doing a damn fine job of it. Bionic Due is not only a necessary purchase for all true rogue-clone fans, but it’d easily be a pride-worthy addition to the game collection of anyone with even a remote interest in this sort of thing. This game is a great laugh and a good challenge; Arcen Games, hat’s off to you chaps.

Putting these minor gripes aside; if you can’t tell already, I really like this game. Indie devs don’t always come up with the goods, but Arcen are doing a damn fine job of it. Bionic Due is not only a necessary purchase for all true rogue-clone fans, but it’d easily be a pride-worthy addition to the game collection of anyone with even a remote interest in this sort of thing. This game is a great laugh and a good challenge; Arcen Games, hat’s off to you chaps.

Realising a momentary oversight has condemned you to almost certain doom, but then, with only a perfect set of well-thought long-contemplated moves, you pull everything out the bag, blow the rig, and get the hell out of dodge to receive a hard-earned mission successful. 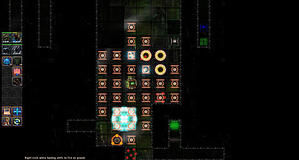