Like a vampire's bite, it's over before it becomes too painful

Blood Knights is a shallow game. Taking place in a world where Vampires and Humans are at war, you play as the-less-than-inspirationally-named Jeremy. With the world drifting into chaos - as a result of some fancy, balance-keeping doodad being stolen - and the moon all shattered, he's forced to make a blood pact with vampire Alysa, the other playable character at your disposal. Switching between the two - or playing as both in co-op mode - you must fight humans and vampires on your quest to restore balance and break the bond between you.

It's not the most imaginative of setups, but it serves as a backbone for your hacking and slashing, and the war between vampires and humans also allows for the one lone attribute that makes Blood Knights even mildly interesting. Occasionally, you're given a choice; will you stay true to your human side and aid their cause, or will you give in to the darkness and pledge your allegiance to the vampires? There's no real lasting effect of the choices you make - and it felt as though you'd largely get the same ending every time - but it's the only real thing that makes you feel involved in the story.


Along the way, Jeremy and Alysa 'banter' and 'flirt', where banter and flirting translates as taking it in turns to spout off bits of socially awkward dialogue in a manner befitting two people who have never actually spoken to a real human or vampire before. Occasionally, the raucous back-and-forth between the two allows the dialogue to hint at a more emotional, deeper bond - I bet you didn't expect their frosty relationship to thaw out as the game went on - but the uninvolved voice acting and hammy dialogue means these moments serve only as unintentional comedy, leaving us completely adrift from the character's relationships or motivations as we trudge through the equally uninspiring tale.

Your relationship with your loot - which in any decent RPG is one of greedy, selfish lust, as you form deep attachments to what is in your inventory, but still have no problem casting it aside for the shiny allure of a new stat boost - is just as shallow. The stats are so basic - weapons have an attack rating, armour has a defence rating, with both having the possibility to boost luck, critical hit, or health - that you never have to think about what gear you've got or what difference it makes. You get a better item, you equip it without looking, your damage number goes up. It's too simplified, too meaningless. The system might as well not exist, such is its impact on how you play and what you do.

Combat, too, is woefully simple. Your two characters each have basic attacks - Jeremy takes the melee role, Alysa the ranged role - and two special attacks each on top of that. You can switch between the characters at will, but will find the ranged character most useful - she can simply walk away and shoot most enemies without running into trouble, and the terrible AI means if there's a ledge at hand, you can jump up and fire down below with absolute ease.


Boss fights shine a horrendously large magnifying glass on these issues, with most of them following the same formula of one big baddie with a lot of health, who periodically summons normal troops, while you simply run around shooting until their dead. There's no real skill involved, and even if you were to up the difficulty to hard, the tactics wouldn't change - you'd still just be running around swapping between a few special abilities.

Thankfully, the game clocks in at around four hours long, meaning it ends before the mediocrity becomes too draining. However, it’s likely the short length that contributes to the shallow nature - it tries to fit all the staples of a genre that usually demands massive length into such a constrained time that it doesn’t have room to do anything interesting or expansive. Plot points are rushed through, the ending arrives suddenly and unannounced, the two main characters are barely developed, let alone supporting ones, and loot/levelling systems are kept as simple as possible as you’d have no time to learn anything more complicated. Unfortunately for Blood Knights, taking established systems and watering them down just leaves you with a diluted mix that tastes nothing like what it’s trying to imitate.

Every single line of witty banter between Jeremy and Alysa. 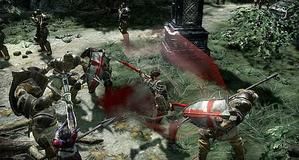