Bombshell is a major dud

Hey, you remember when when Gearbox Software bought the infinitely-in-development Duke Nukem Forever from 3D Realms and actually finished and released the thing? It turns out that there was actually also another Duke game in development! 3D Realms had partnered with Interceptor Entertainment - the Danish studio responsible for 2013’s Rise of the Triad remake - to make an isometric, RPG-influenced shooter called Duke Nukem: Mass Destruction. But then Gearbox was like “no, we own Duke now,” and 3D Realms was like “oh, okay,” before promptly getting bought out by Interceptor. They removed Duke from the game and retitled it Bombshell.

Is any of that really relevant to the finished product? Not really. But that courtroom drama is infinitely more interesting than anything going on in this dull, derivative shooter.

Bombshell is a major dud.

Aliens have invaded the Earth and kidnapped the president. There’s only one person who can stop them: the titular Colonel Shelly “Bombshell” Harrison, a badass chick with a sick robot arm and major attitude. This would’ve been a corny combination of cliches 15 years ago, let alone today. Making a big, dumb action movie cliche that works is an art form in itself at this point, and Bombshell’s straight-faced stupidity lacks any of the irony needed to make the throwback work in 2016. Shelly spends much of the game dropping such fabulous quips as “How many aliens does it take to screw in a light bulb? None! Ha, they’re all dead,” a line which you will hear literally dozens of times throughout the game. At a certain point, she remarks “Who writes this shit?” which is a sentiment I can kinda get behind. A couple of cutscenes are just aggressively dumb enough to be funny, but those are few and far between. 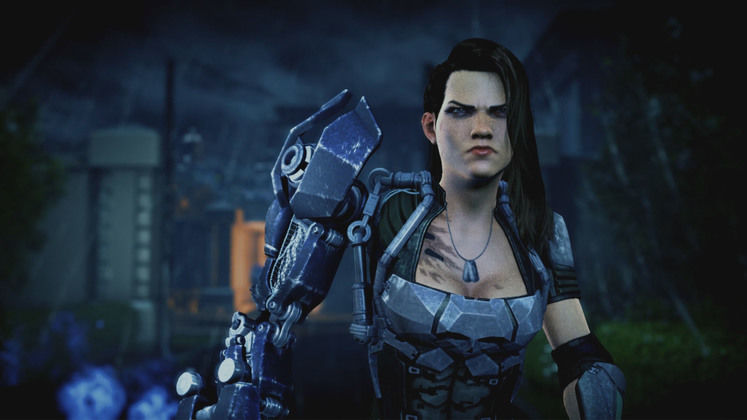 Shelly’s no Duke, but that’s not necessarily a bad thing

But hey, it’s a game in the spirit of Duke. You’re not here for the clever storytelling or insightful writing. It’s about blasting alien scum. Sadly, the action is just as brain-dead. Viewing from an isometric overhead perspective, you use either mouse and keyboard or dual-analog controls to move and shoot. Enemies will either run at you while shooting, or run at you until they reach melee range. Your only tactical option, then, is “run away and shoot.” The enemies all have distinct visual designs, but they behave in basically the exact same way.

You have a big variety of weapons, but none of them change the way you play. Chaingun? Run away and shoot. Flamethrower? Run away and shoot. Rocket launcher? Run away and shoot. Shotgun? Run away at a slightly smaller distance and shoot. Every weapon has a lengthy upgrade path and alt fire options, but none of them offer any discernible variations to how you play. The enemy design doesn’t force you to consider what weapon to use, so you just use whatever you currently have ammo for. A few special abilities governed by a recharging meter are there to add wrinkles to the gameplay, like a dashing power punch that sends enemies flying, or a shield that absorbs gunfire and damages anyone who gets close, but they do nothing to break the loop of running (away) and gunning. 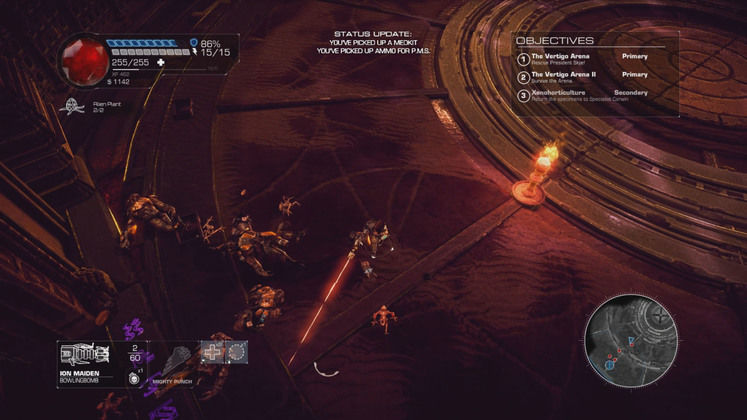 You have a health system similar to the original Halo, with recharging shields and a medkit-powered health bar, but they’re tough to keep track of in the midst of a fight. There’s no good audio or visual cue when your shields are down, and your health is represented by a Diablo-style orb that seems to constantly display your health as of about three seconds ago. The only way to accurately gauge your health is to watch the actual numbers in the corner of the screen, which obviously prevents you from seeing the actual action. This problem is compounded by the fact that the enemies are colored in such a way that they tend to blend into the environments, and the animations don’t strongly communicate when you’re taking damage. It felt like half my deaths came when I didn’t even realize I was in danger. I always had a massive stockpile of medkits to heal up with, but I often couldn’t even tell when I needed to use them.

The interface approaches nightmare levels of user-unfriendliness, even beyond the aforementioned problems with the health display. It’s difficult to change weapons in the middle of a fight, and sometimes the trigger doesn’t work after the selection, forcing you to switch to something else and back again before you can shoot. The screen for selecting upgrades is almost as difficult to navigate as it is to read, and I couldn’t figure out a way to move back an option without completely exiting the menu, which made comparing weapon upgrade options basically impossible. Numbers sometimes get cut off on the main screen - I could only see the first digit of my medkit count for most of the game. 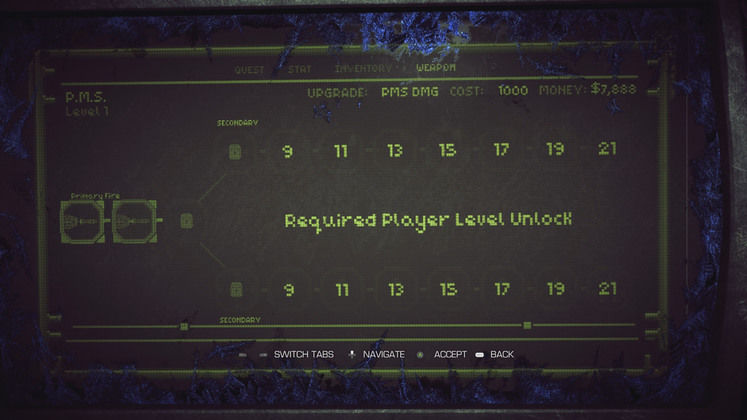 And that’s to say nothing of the numerous bugs and glitches. The developers pushed out patches furiously over the course of the review period, so it’s impossible for me to say what will or won’t be in the final game. But over the course of my time with it, I had enemies that didn’t die, bosses with invisible health bars, and at least four desktop crashes- there might have been more, but I lost count. I have not finished the game due to a glitch in the first level of the game’s final area that kept me from collecting an item necessary to progress, and no amount of restarts or respawns would fix the problem. Will these problems be fixed by the time the game’s available for purchase? Some of them, certainly. But the bugs are so numerous and the overall package so slapdash that it’s tough to imagine them being ironed out completely.

Bombshell isn’t the worst game I’ve ever played, but it’s among the most dull and uninteresting. From its cheesy, late-90s alien blasting plot to its absolutely repetitive action, it’s tough to pull out any redeeming qualities. Even assuming its bevy of technical issues get ironed out, this one still isn’t worth your time.

When that glitch halted my progress, freeing me from having to continue playing this awful game. 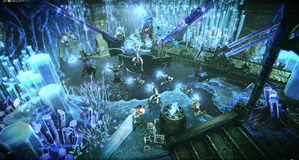