Not exactly a champion effort

The lure of shiny new items to kit out your character is the driving force of many RPGs, giving you reason to spend hours clicking and clicking. Searching for the holy grail, which usually arrives in the form of a weapon that leaves you lopsided whenever you pick it up, you kill and kill and kill, always looking for the next grail no sooner than you've donned the last one. RPGs basically put you in the role of an ancient iPhone user: to most the difference between two loot drops are negligible, uninteresting stat changes, but to you they're the most important thing in the world.

Clan of Champions doesn't really understand this, making no attempt to polish the loot that you're supposed to crave, barely even treating it as bait. You are showered with mundane items on every single level, from flails to helmets to breastplates, and each has an appearance and name that even a particularly bland slab of concrete would stand out against.

The stat changes just don't make enough difference, and you never feel a buzz when equipping an item for the first time. The difficulty never seems to change, meaning the upgraded stats on your items never seem to matter: you'll always be comfortable in beating your foes, removing any real challenge or panic, making the need for an upgraded armoury redundant.

The problem with all this is that Clan of Champions does seem to put an emphasis on loot, at least in terms of quantity, if not quality. It's almost intimidating how much loot you have to sort through when you're not fighting. Each mission in the world exists in a separate portal, breaking up battles into arena matches, whereby you fight a controlled number of enemies and then move to the next.

At the end of each battle, you're left sorting out the various bits and bobs that have fallen from the enemy. It shows you all the dross you've found, giving you the option to leave it behind or to sell it, and at first you'll take everything you can carry, before realising that you'll always have more money than you ever need anyway, rendering the entire system slightly pointless.

It only really works when you're in the middle of a battle, as the loot that litters the floor can be picked up in each hand at any time and used as a weapon, which does give the illusion of varied combat, but it never feels really different enough. It's funny when you stick a helmet on the end of your fist and start swinging punches with it, but the main purpose of the on-the-fly weapon switching is that it supports the three combat systems that are in place.

There's three main styles to choose from: hand-to-hand, sword and shield, and dual-wield. Each comes with different special abilities, but none really demand you to change how you fight. You'll always have to block, unleash a guard-breaking move, and then a flurry of attacks. Whether you're using two axes or your bare fists, it's always the same basic pattern.

Waves of enemies keep running at you in the same drab environments again and again, never making you think beyond the tactics you learn in the first few encounters. They come in the form of orcs, humans and elves - the same races that your created character can belong to - but aside from the occasional tough ones, they pretty much behave in the same way, standing around dumbly and waiting for you to engage them. The AI who fight on your side are even worse, often just standing around doing nothing, and occasionally simply getting in your way.

It does get better as you level up, though, if only because you're given more special attacks to play with. Combat is sectioned into high, medium, and low attacks, with the ability to link them together into combos, or modify them into special moves that can only be used when recharged. You'll find yourself heel-kicking and weapon-spinning, with magical abilities also brightening the battlefield, and it does hit an enjoyable rhythm at times, albeit a very predictable one.

Clan of Champions is always predictable, from the moment you've created your character and completed the first mission, until you finish the last one. There's no real sense of progression: you customise your character but it's not enough to make them feel entirely your own, and the story that acts as the backdrop to each mission is barely recalled, meaning you're fighting stage after stage with absolutely no motivation to continue. Once each stage is complete, you plod through the same clunky menu screens, before going onto the next one, and the next one, and the next one, withouta single surprise along the way.

Combat improves slightly as you progress.

It fails to excite or to engage, with a number of its systems feeling underdeveloped, and thus unnecessary, combining to create a humdrum affair. You upgrade your stats and your armour, but your character never feels personal to you, and there’s no defining story to keep you interested. The combat hits an enjoyable, if uninspired, rhythm at times, but really, Clan of Champions does nothing new, confining you to small, cookie-cutter environments and not even having the good grace to polish your loot. 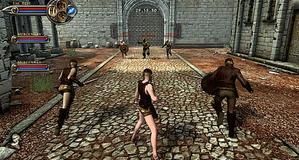