Vapours in the sky 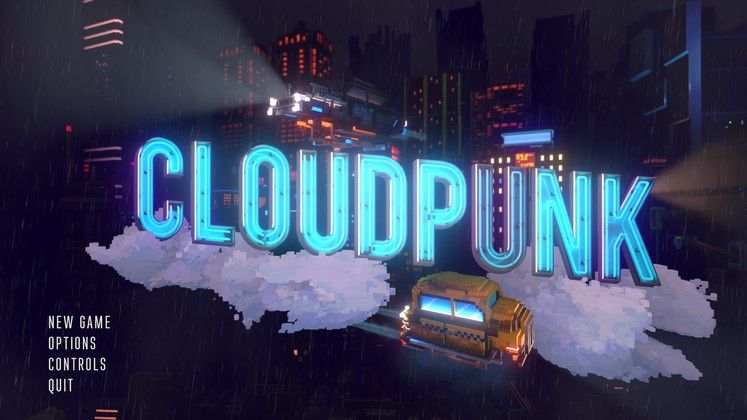 Between the cloud ceiling above and the fog below, endless skyscrapers loom. In a city bathed by rain in the shadow of the neon lights, a hover car weaves through eternal traffic on its way to the next delivery destination. That is you, and that is Cloudpunk.

An indie adventure game set in a cyberpunk universe, Cloudpunk is rather unique. Playing as a delivery driver named Rania as she moves to the big city of Nivalis from the rural Eastern Peninsula, you work through one seemingly endless night as a courier to an illegal delivery agency in an attempt to pay off some large debt owed to an undisclosed corporation. 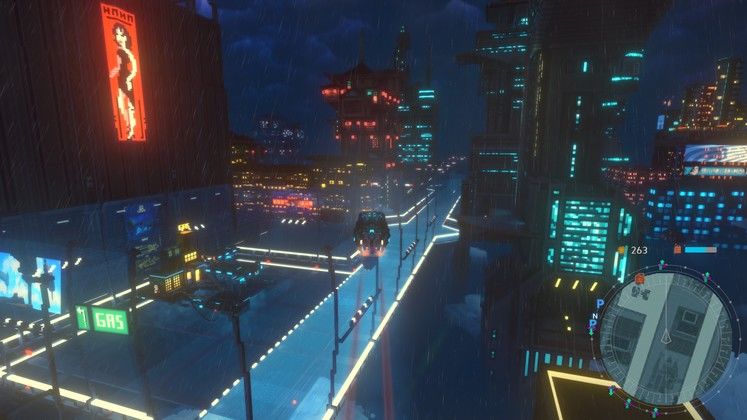 What starts off as a normal courier job… never stops being a courier job, though glimpses of a larger plot abound and take more shape near the end of the game. Between delivering packages and ferrying people around in a very big city divided by zones, you will get small snippets of larger happenings, including terrorist attacks and an underlying technologic subplot tied to the city’s arcane infrastructure, yet the plot fully embraces the idea of “a day in the life of a commoner”.

That’s not a bad thing, as it’s what Cloudpunk sets out to do from the start. The gameplay itself is extremely simplistic, divided between driving a hover car in three dimensions and walking on foot to talk to people. The hover car has a nice weight to it, making it rather enjoyable to drive as you ebb and flow through the Coruscant-like traffic. While initially sluggish and slow, its turn speed and vertical movement can be upgraded (and a turbo function added) with the money you make completing jobs. While the turbo and turn upgrades work quite well, the vertical upgrade is virtually unnoticeable – the car will still stutter when going up or down and stop for seemingly no reason mid-ascent, which alongside the VERY tight altitude ceiling, makes 3D flight extremely unenjoyable and restrictive. 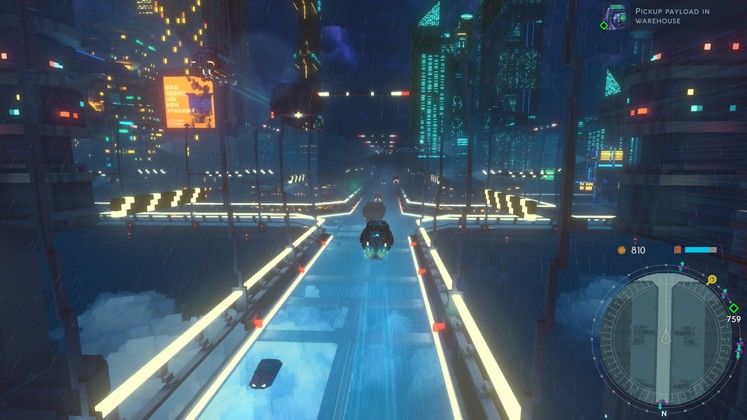 The on-foot movement, meanwhile, is absolutely unforgettable. With a fixed camera perspective and only movement keys plus one interaction button available, the walking part of the game feels detrimentally lean – there is nothing fun about slowly running around large environments just to talk to one person, then run all the way back to your parked car. I dreaded every moment the game told me to leave the hovercraft – in fact, the on-foot sections are so boring and rote I’m almost convinced Cloudpunk should have taken the Driver approach, where the whole game takes place inside the car.

A huge portion of that comes from the fact Cloundpunk so effectively executes the city and all related visual aspects. Nivalis is absolutely breathtaking to behold, with gigantic skyscrapers topped by a swirling sea of clouds that look ready to engulf the city in an ionic thunderstorm at any moment. The eternal rain and the overwhelming contrast of neon lights and darkness make all the different architectural styles that more visually interesting, and even the hover cars stand out as very different as they zip through the sky. 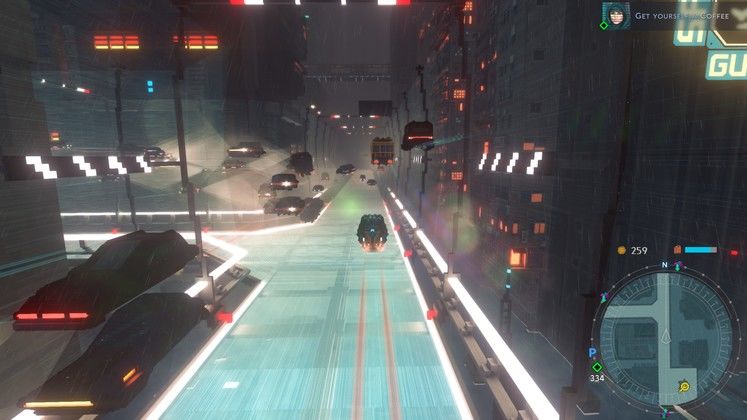 Unfortunately, Cloudpunk loses in the execution. That beautiful city is divided into zones without a map to guide you, discouraging exploration unless you memorise the city without visual aids – something you have zero reason to do, thanks to the mission waypoints and lack of game outside those missions. Similarly, the actual 3D ceiling is remarkably low – you hit invisible walls both below and above the flight plane after just a few seconds of vertical movement, meaning you don’t get to weave your way around spires and skyscrapers and see the city from above, instead being locked to a very tight and restrictive navigation environment. And while the game classifies itself as an RPG, it is actually an adventure narrative game – you don’t even get dialogue choices or skill points, and aside from a handful of missions that give you a choice, the rest of the game is firmly planted on a linear track.

That design decision is prevalent throughout Cloudpunk’s narrative, which methaporically slams the brakes at every single moment. The game forces you to listen to endless, several-minutes long conversations before giving you a waypoint, meaning a huge portion of the gameplay involves you hovering in place to not waste fuel while the characters debate something for 5 minutes before telling you what you need to do in a mission. It wouldn’t be much of an issue if the writing was good, but aside from terrible dialogue, Cloudpunk has some of the worst voice acting we have heard in the past decade. 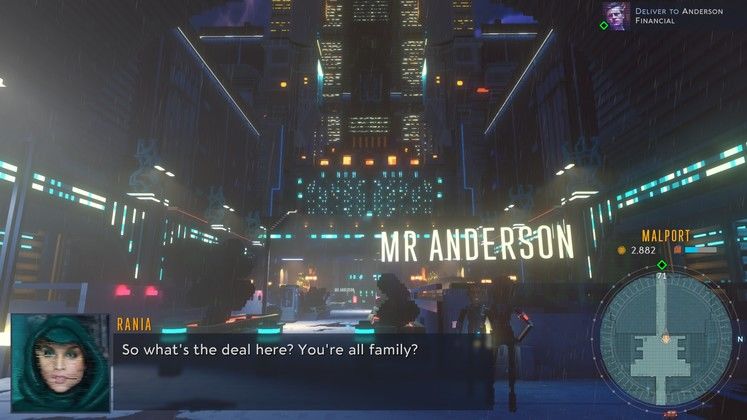 Side characters and random NPCs in Cloudpunk are actually quite talented, presenting an interesting performance that seems at home with most voiced video games. However, Rainia and her personal computer/robot dog Camius are single-handedly atrocious, and honestly detracted severely from the game thanks to how ubiquitous they are. I’m the kind of person who doesn’t even listen to music while playing so I can fully experience the soundtrack the developers intended, but after a few hours I was forced to reduce the game’s voice volume to 15% when faced with the prospect of listening to that horrible performance by the main characters through every second of the game.

So in the end, Cloudpunk is a hard game to classify. On one hand, it is absolutely gorgeous and features some surprisingly fun hovercar controls, but on the other hand, it gets bogged down by shallow gameplay, a very annoying story delivery system, and some of the worst voice acting this side of House of Dead 2. If you are a fan of the cyberpunk genre and are looking for some eye-candy but don’t mind a game that doesn’t respect your time (nor your ears), Cloudpunk is the game for you.

An amazing looking game with an interesting premise, let down by shallow gameplay and stuttered flow of story and dialogue 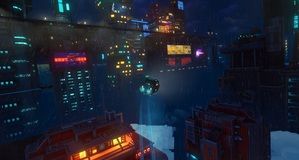