While I’m a big fan of all of Crytek’s output I couldn’t help being nervous about Crysis 3, and this was for three reasons. 1) Despite a few showings we still haven’t really seen much of the game. 2) Halfway through its development Crytek started saying that free-to-play was their future post-Crysis 3, so it sounded like they wanted to get that out the way as quickly as possible. Finally 3) Far Cry 3 came out not two months ago and ironically was the game Crytek wanted to do but said they couldn’t on current consoles.

Consequently I went into Crysis 3 with more than a little trepidation, rather than the excitement I was expecting (especially after the atrocious AliensColonial Marines). Sadly despite it being definitely a good game my trepidation was well founded, as Crysis 3 has many flaws that prevent it from being more than straight “good” and frequently stops being “fun”. I howled with frustration and rage far more often than I felt like I was enjoying myself, and all the best exciting bits were matched by frequent tedious restarts.

It’s 20 years after Crysis 2 supposedly, and the CELL organization have used the alien Ceph technology to create free unlimited energy – and yet somehow charge people for this to such a degree that debtors are put into forced labour camps. A rebel uprising against CELL frees nanosuited player character Prophet from his icy storage, and he and former suited squadmate Psycho head towards the sealed-off remains of New York City to fight CELL and whatever remains of the Ceph – although Prophet’s visions of the powerful Alpha Ceph may complicate matters.

The main plotline is dull, absurd, and more than a little predictable – protagonist tells people about bad things about to happen, isn’t believed, they happen anyway, most of the disbelievers die, protagonist saves the day.

There is excitement fortunately in the epic Hollywood moments Crytek pull forth, especially when the inevitable happens and the Alpha Ceph turns up (leading to huge battles between CELL and Ceph, mostly just off camera sadly), but one particular moment that I don’t mind spoiling since it’s in every blockbuster ever just resulted in a shrug from me. Spoiler – Prophet discovers that the CELL are going to nuke New York from orbit to stop the Ceph, but unlike in The Avengers New York is ruined and almost totally uninhabited apart from CELL (who leave), rebels (who can leave), and the entire Ceph invasion force – so who the hell cares?

Luckily Psycho is on hand to provide a much more interesting sub-plot involving his relationship with rebel commander Claire and him coming to terms with having his nanosuit viciously stripped from him by CELL. I love the way Psycho losing his nanosuit is made out to be like drug withdrawal, covered up with him being in shock at the atrocious things CELL were doing to people at the Stripping Labs (actual name, not as fun as it sounds).

What this amounts to is that Psycho is still the coolest character in the Crysis series, and the debates about whether Prophet is still human or not take a back seat in terms of my interest. Still, I personally at least really liked the ending (a good ending in an FPS? What a novelty!) which has a lovely and subtle call-back to the original Crysis.

The game itself plays similarly to Crysis 2. A lot of linear connected areas filled with enemies you can take down by stealth or by force, often with numerous ways to accomplish this. The ability to hack turrets, minefields, and even certain types of Ceph is new and welcome (especially as the hacking minigame is fairly straightforward), but to be honest while the actual areas are bigger than Crysis 2 it doesn’t often feel like there’s as much to do. Yes the occasional huge play-space is nice but often there’s nothing in it, nor is there anything to gain by sneaking the long way round to your target instead of just cloaking and going straight at him.

It’s also unfortunate that a game so heavily skewed towards stealth gameplay should almost cock it up entirely, or certainly just make it less fun than the non-nanosuited Far Cry 3. Cloaking is nice and useful but always runs out too quickly, which wouldn’t be so bad except that enemies can spot you a mile away if just your big armoured toe is sticking out of cover.

Enemies become permanently alerted once one of their number falls, which combined with the last point makes sneaking and silently offing all enemies in an area near impossible. This is made all the more aggravating by the terrible checkpointing system that is the one thing Crytek have managed to get consistently wrong in every single game they’ve made. If you spend thirty minutes sneaking around carefully picking off enemies, die, and find yourself having to do it again you tend to forget subtlety (or playing how you actually want to play) and just fire grenade rounds at them instead.

Something else that Crytek have never really nailed is the feel of shooting satisfactorily, which is why stealth always seems to be the better option. Despite supposedly being an armoured badass a single bullet will send Prophet’s aim utterly wild and his vision will cloud, meaning if you don’t get the drop on an enemy it’s far too difficult to fight back.

Still, the guns themselves are a lot more fun to play around with this time around, including a few devastating Ceph weapons. The much-advertised bow is a little too useful on CELL soldiers and a little too useless on Ceph but is entertaining nonetheless, especially using it while cloaked or trying out the alternate arrowheads (plus it’s a nice touch to be able to tag arrows you’ve fired on the Visor for easy recovery).

Crytek’s games have always felt more at home on the PC and in terms of controls that’s pretty true. You’ll have to fiddle with the keyboard layout a little as the default’s pretty bananas, but otherwise mouse and keyboard is the control system long-range-shooting-people-and-aliens-with-a-badass-bow was meant for. Even the scarcity of vehicles seems to play into this (everyone remember the terrible steering in Far Cry?), which is a shame since a brief tank bit brought back fond memories of Crysis 1. Oh, and Crytek gets extra bonus points for allowing us to skip all cutscenes and starting logos, and not forcing us to sign up to MyCrysis (which then doesn’t work) as soon as we start too.

The multiplayer offers plenty of game modes from standard Deathmatch, scary Hunter (soldiers vs cloaked operatives), and a variety of capture-based types similar to Crysis 2. There are loadouts, XP upgrades, local servers, and all the stuff you’d expect from a modern FPS on the PC – along with a baffling Origin sign-up upon entering the multiplayer area, which is odd because you have to play Crysis 3 through Origin anyway (please go back to Steam EA, you just don’t have the common sense).

The trouble is that servers are already populated by either far-too-good or far-too-suspiciously-good players, meaning that it’s very hard to get better or have fun unless you really enjoy being sniped from miles away by a shotgun (seriously, that happened to me). Despite the range of modes I doubt it’ll be bothering the bigger FPSs in a month’s time.

I obviously have to mention the graphics in all of this, and I rarely go in for such simple thrills but wow does Crysis 3 look amazing. I was playing this game on over High settings before I watched the PS4’s KillzoneShadow Fall demo and consequently I was left massively unimpressed by Sony’s effort, as Crytek once again show how far ahead PCs already are. The textures, the detail on people, the overgrown grass swaying in the breeze, the effects, and when full-on battles start getting fought it’s honestly like you’ve stepped into a Michael Bay movie (in a good way). I never go in for hyperbole like that but if you’ve got a top-of-the-range PC Crysis 3 is the one to show it off with.

Just don’t show it off too much, because it’ll probably crash. I must’ve crashed 30 times with the same DXGI error that the forums (as plenty of other people have had it) suggest graphics card overclocking for as the only solution. The only way I made it to the end of the game was by knocking the Graphics Settings down, and that was something I didn’t really want to do since the “oo-ah” factor was a big reason why I kept playing Crysis 3 (and having to review it of course).

There are plenty of other bugs and crashes being reported too. In terms of bugs my most notable were boxy explosions when using vehicles, being unable to enter some vehicles (including frustratingly on the final boss fight), and in one large mission rather hilariously having every single secondary “save the soldiers” mission end finding inanimate NPCs standing motionless like cardboard cut-outs. Don’t expect a completely stable game right now, is what I’m saying.

Crytek seem to have this innate ability to forget what made their previous games liked and fail to address any complaints – so with Crysis 3 we once again see poor checkpointing, an abundance of non-human encounters, not so fun shooting, linear enclosed areas, and forgetting about human enemies altogether after the halfway point. Their best looking game yet, but also their weakest. Nevermind guys, now you can get working on that free-to-play future you’re so certain will make you so successful.

The Crysis 1-recalling tank battle, which is over far too quickly.

Crytek seem to have this innate ability to forget what made their previous games liked and fail to address any complaints – so with Crysis 3 we once again see poor checkpointing, an abundance of non-human encounters, not so fun shooting, linear enclosed areas, and forgetting about human enemies altogether after the halfway point. Their best looking game yet, but also their weakest. Nevermind guys, now you can get working on that free-to-play future you’re so certain will make you so successful. 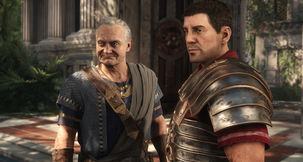