More than the sum of its parts, Dark Scavenger strip mines genres and lashes them together for a cosmic joy ride and a lesson in 'assertive recycling'

Running from the inevitable, you come to a crossroads. To the west is a ravine; you could try and jump it or swing across on a vine. To the east is gentle terrain, but cannibal territory. Directly in front of you is a cupboard you could hide in.

You choose to hide in the cupboard.

Hands trembling and drenched with sweat you pull the cupboard door open, readying to cram yourself into it. As you pull at the handle, the door flings itself open and a lion bursts from inside, pouncing on you and pinning you to the floor!

The lion eyes you intently and says “Maybe you should just get on with the review?”

Essentially Dark Scavenger revisits what RPGs commonly used to be. It's not that simple though. DS incorporates other elements into itself, to the point where not only is Dark Scavenger gleefully and unapologetically atavistic, but refreshingly, and even confusingly novel and forward thinking.

Even the setting is unusual. Dark Scavenger follows the journey of someone only ever referred to as ‘Dark Scavenger’, caught adrift in space after losing a bout of fisticuffs to a cosmic deity, they find themselves on a space-ship of galactic misfits who charge him with helping them to locate an alternative power source before they run out of fuel and they all die horribly. Said misfits include a kindly skeleton, green games show host and H.R. Giger presents... weird mute alien guy. The character of Gazer is actually strongly reminiscent of that of the aliens from the film ‘Independence Day’.

The planet in question is primitive by comparison, so you’re an enlightened space man meddling in a world of savages. Unfortunately, the primitive cultures seem surprisingly blasé about the veritable magic power of advanced technology, so the going isn’t as easy as might be expected.

Everything in the game is driven by the need to find loot. You are after all, a scavenger. In a lot of ways, the game is like a see-saw that tilts back and forth, with loot being the fulcrum it rests upon.

Most all loot you find can be taken to one of your fellow Dark Scavengers to convert into something usable; a weapon, an item, or a summoned ally. This choice is presented directly after a map section is left, and it can’t be put off, which is a little annoying, but that’s negated by the wide range of choice routinely thrust on the player. Of course it’s never outright said what you’ll get when you make your choice. You get a vague clue, or a usually amusing mimed description.

Add that to the fact you can only have each of your fellows make you one new bauble per screen and you’ll be routinely chin rubbing as you weigh the possible benefits and pitfalls. In essence, Dark Scavenger is all about these sorts of choices, and their irreversible consequences; there’s certainly no quickload button and very few times you can backpedal from a situation once you enter it. Even when you hurriedly back away there are repercussions, not to mention the scope of some choices that return to haunt or help you further on into the story.

Combat is, unsurprisingly, a regular occurrence and is one of the game's best points. It’s turn based and reminiscent of something like Final Fantasy, except there’s no party, it’s you against everyone else. The turns are generally quite fast and often tense. There’s an array of customisation in the way weapons and items can be used in concert, as well as the various types of elemental effects they have and the weaknesses or strengths of enemies.

The oddball nature that the items usually take adds a layer of surrealism; on the one hand it’s not very immersive, but on the other they bring a quirky level of detail to battles. The Dentist’s Drill item brutalises enemies with (portraits of) their mouth wide open and everybody feels the burn when you call upon the aid of THE SUN!

After a while using certain items in fights may become a double edged sword because of the various other uses loot has outside of battles, though there’s certainly no shortage of things to swipe in the game.


Perhaps DS’s biggest success is how effortlessly it incorporates elements of different genres into what it does. The top down perspective has a vaguely board-gamey feel to it, with entities of interest being highlightable. Interaction with the world involves a series of implied options that can involve diplomacy, aggression or negotiating environmental situations with certain items in the inventory; such as using a sword to pry open a vault for instance, or a long thin item to brace a cage so you don’t have to fight the angry beasts within. It’s all text based, and nothing is animated beyond some static figure jiggling. It comes across very much like a story being told, as you participate in what happens next.

There is an adventure game element and it’s most pronounced where you find key loot that allows the easy resolution of certain situations that otherwise might involve a titanic battle or elaborately winging it. The game does involve lots of talking to characters, but for the most part you can play the game how you like, either as a smooth talker, or a rogue-ish handyman, or a violent butcher.

There are lots of moral choices throughout, but there’s no real character statistics beyond the weapons and fighting itself, so it’s less about an actual tangible moral compass and more about playing a role, which is essentially the point of RPGs (it’s even in the name).

It should be pointed out that while on paper, Dark Scavenger might sound technologically primitive, stubbornly dry and generally out of touch with modern games and what they can do, it’s surprisingly engaging, unpredictable and exciting at times. There’s a lot of well thought out set pieces which have a real sense of momentum and urgency along with multiple resolutions, irreverent humour, enjoyable character dialogue and most importantly, a good story. It’s most important because the game IS its story.

However, the writing’s not perfect and this is most obvious during one of the disingenuous philosophical soliloquies villains sometimes spout, or the player character’s tendency to ask “what the deal is” with things, heavily implying the protagonist is actually Jerry Seinfeld. Dark Scavenger hosts a vibrant and detailed world with distinct races with their own unique culture, faunae and florae which both play recurring and consequential roles, and the very real sense of having stumbled into an event much bigger than the player themselves.

Even though everything is predominantly text based, it doesn’t affect the game negatively at all and it makes all the meticulous detail that’s gone into Dark Scavenger that much more real, because almost anything can happen. Knowing how to scare off a wild Kimusa might save your life just as being able to turn your captors against each other by exploiting their sore points which you’d have discovered if you were paying attention through previous conversations with them.

As great as the design ethos and narrative element of Dark Scavenger is, its biggest weakness is its technical execution. It runs completely from [Adobe] Flash, which means that while it’s not at all resource heavy, it comes with its own set of issues. The most annoying of all is that the save games are tied into your browser’s internet cache, which means that should you clear it for whatever reason, your Dark Scavenger save games go with it, which is inconvenient if you have gotten into the habit of routinely clearing the cache.

Supremely irritating as that is, there’s a fairly easy and relatively painless work around, but the mere fact that it’s necessary comes off as lazy coding, since there are several Flash based games that don’t do this.

Secondly, while the art is good and evocative of the general tone of DS; fantastical with a general jovial atmosphere, it seems like its native resolution is windowed, because if blown up to full screen, it’s not very sharp.

Lastly, the music: There are lots of genuinely really good, even catchy compositions that appear throughout DS, but their delivery as low quality midi synths hampers the enjoyment, especially the electric guitar synth which sounds like it was made using a shrill calculator.

It’s a credit to the actual content of DS that these problems virtually vanish as you get into it. Dark Scavenger could use some more polish in almost every department, and it could have been a little longer, since the last chapter is mostly wrapping up subplots and boss battles, but it’s generally very well paced and a sign of how enjoyable and compelling it is that it evokes the desire for more. The end game is especially satisfying and a culmination of all your hard work.

There are lots of stand out moments throughout the game, but among the ones that don’t spoil the story are choreographing a tag-team take down of a horde of angry mutant humming birds with a big furry luchador.


Dark Scavenger takes an iteration of the RPG genre that is generally thought of as obsolete and breathes fresh life into it. While there’s room for improvement, it does what it does very well, and is packed to the brim with colourful characters and desperate situations. If you like RPGs or adventure games then you’ll get a lot out of Dark Scavenger, if you don’t then you should turn to pg. 36:

Turning the corner, you encounter the lion from earlier. He is shaking his head in disappointment at you. Consumed by guilt you collapse onto the floor in a heap to think about what you’ve done.

Your adventure is over. 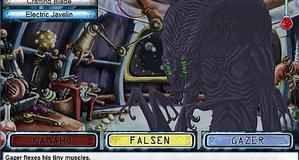