It’s the small changes you’ll likely notice when coming back to Techland’s zombie opus, and with good reason; Dead Island: Riptide is essentially the same game as the original, repackaged and re-homed to a new island dense with jungle and populated with the same characters, enemies, RPG mechanics and combat flow. It is, by some stretch, the most expansion-worthy sequel for quite some time, and so any experience with the first Dead Island will directly dictate whether or not it’s worthy of attention.

It starts as that original ends, with our group of four immune survivors making their way off the island of Banoi in a re-purposed attack chopper. Of course, things quickly take a turn for the worse, and it’s not long before our gaggle of twenty-something idiots find themselves tucked up in the cargo hold of a ship, bound for a destination unknown. One short, incredibly clunky and dull combat tutorial later, they’re washed up on the shores of a nearby Island with a brand-new protagonist for company. His name is John Morgan, and he rounds out the group with a focus on hand-to-hand combat rather than the pure weapon-based antics of the other survivors.


Whichever protagonist you choose, they’ll eventually make the short trip from seashore to nearby village, and it’s here that Riptide’s first minor structural addition presents itself in the form of a wave-based survival mode. The village and its inhabitants are under siege, and it’s your job to run around strengthening up the fences, hastily collecting weapons and fending off zombies until there are no more. Each of the villagefolk has an individual health meter, and should you keep them alive they’ll become trading partners, capable of levelling up independently after feeding them items from fetch quests. The better they become, the more you’ll have access to rare weaponry and other trinkets that make day-to-day life in Panalai that much more bearable.

Everything else about that village will be eerily familiar to those that played the original however, and it’s not long before the same pattern of questing presents itself. Riptide’s villages and safe houses act as hub locations in sections of each map, with characters spitting up item-fetch missions that’ll take you deeper into the uncharted beaches, jungle pathways and caves that litter the environment. Eventually you’ll collect enough parts to activate a broken-down vehicle or clear a route through to a different locale, and it’s on to a new map and a new set of quests. Rinse. Repeat.

What that means is that Riptide offers the same sedate pacing as the original, with plenty of jungle-based exploration on foot, via car or boat. The latter of those options is new for this expandalone sequel, and the waterways and canals of Panalai quickly become a useful tool for cutting down travel time and racking up a few dozen quick kills for the zombies that choose to shuffle through the waist-height liquid. Given that water was essentially deadly in the original, Riptide’s shuffling dead can no longer drown in those shallow depths, and there are several new types of floating zombies to keep you on your toes even when the waterways are littered with otherwise inanimate corpses.


And keeping you on your toes is still at the heart of the Dead Island experience, for better or worse. Combat retains the same tense flow as the original, with zombies requiring careful distance-management and the ever-decreasing stamina bar still top priority. Two or three zombies can still overwhelm your defences in a matter of seconds, and as they all automatically level up to your current status, there’s little that can be done to make the experience any easier. Skills and perks offer up a few changes to critical attack rates, special attacks and an increasingly-handy refillable rage meter, but other than that there’s no real incentive to harvest XP other than prompting the story along its fairly predictable and poorly-told path.

If you opt to play as John Morgan rather than importing a save file from the original game (the upgrade tree is untouched for everybody else, allowing you to continue your original character with ease), Dead Island’s shuffling combat is at least partially refreshed. His penchant for kicking people in the face makes for a different dynamic to the other playable characters, allowing for effective crowd control as he staggers enemies backwards with chest kicks before honing in on individual members for termination. It works pretty well, although as with everybody else, the stamina meter eventually gets the better of any concerted efforts to turn this into Left 4 Dead. Caution and patience are still absolutely necessary in even the most basic situations.

Despite some of the rough edges being smoothed out with an improved interface and general lack of visual glitching and strange behaviour in comparison to the original, Riptide’s storytelling is still woefully weak. It’s difficult to actually care for the plight of anybody involved in this world when the cutscenes are completely underwhelming, the dialogue is predictable and dull, and the voice acting is so flat that it’s a wonder it made it through the edit. There are few reasons to advance the main plot other than uncovering the next jungle, town or base, and so - as with the original - it’s the core experience of walking and stalking your undead foes that proves the primary draw to continue playing.


And as with pretty much any game of this type, Dead Island: Riptide is improved immeasurably when playing with a co-op partner to take your mind off the narrative aspects of Techland’s efforts at storytelling. Fighting the zombie hordes is still a gratifying experience with two players working as a team, although the firearms speciality continues to be underpowered in comparison to the numerous melee options that litter Panalai’s streets and jungle. There’s a good ebb and flow to the fetch quests when playing with a human partner, with one of you providing cover as the other carries items or puts themselves into a dangerous situation to advance the mission objectives. Playing singleplayer ratchets up the tension of those situations, but I’ll take the comedy of multiplayer over endless respawns and inching towards a goal in a heartbeat.

Much like the original then, Riptide is casual fun when approached from the viewpoint of a group of players that aren’t averse to grieving their own kind, but don’t expect much more than a tense slog otherwise. There’s little to Palanai’s shores that you might not have already seen in Dead Island, and there’s not much in the 10-12 hours of Riptide’s campaign that exceeds the first foray into the undead. This is still a satisfying melee combat experience that pulls no punches on animation timing and difficulty levels, but you have to expect more progression than a simple new setting and a few interface tweaks for your money. For new players, Riptide may well be a decent enough curiosity, but for everybody else, there’s little reason to return to Techland’s zombie-murdering vision.

Much like the original then, Riptide is casual fun when approached from the viewpoint of a group of players that aren’t averse to grieving their own kind, but don’t expect much more than a tense slog otherwise. There’s little to Palanai’s shores that you might not have already seen in Dead Island, and there’s not much in the 10-12 hours of Riptide’s campaign that exceeds the first foray into the undead. This is still a satisfying melee combat experience that pulls no punches on animation timing and difficulty levels, but you have to expect more progression than a simple new setting and a few interface tweaks for your money. For new players, Riptide may well be a decent enough curiosity, but for everybody else, there’s little reason to return to Techland’s zombie-murdering vision. 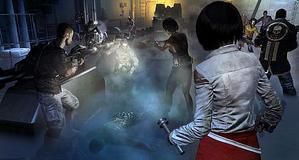