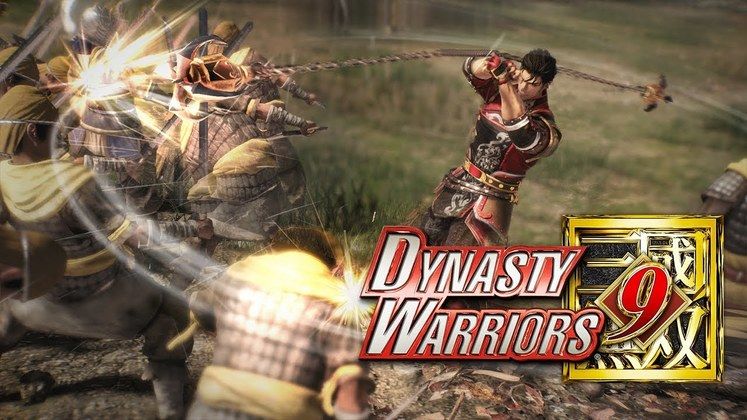 Dynasty Warriors 9 is a particularly frustrating game, as it loves to rub the fact that it could have been great but turned out to be quite the opposite at every turn. This game has problems, serious problems, but at times manages to be fun still - though clearly in spite of its features and mechanics, not because of them. This game is perplexing because time and again the developers proved themselves to be skilled and capable of delivering high-quality games, so the veritable technical disaster that is Dynasty Warriors 9 is a surprising disappointment.

The problems begin with the biggest change this installment offers over previous entries - the shift to open world. In the past, Dynasty Warriors games put players into smaller areas with a timed objective and the games had linear progression for the most part. Dynasty Warriors 9 replaces that with a depressingly huge open world the entirety of which can be freely explored - not that you’d want to do that. The developers certainly got the “open” part right, as the map is huge, but it’s also extremely bland, empty, and more repetitive than the dungeons of Dragon Age 2.

Now, I’ve always liked open world games, and always loved traipsing around, doing every activity no matter how minor, and just taking in the sights. I loved the worlds of, say, Just Cause 2 and Assassin’s Creed Origins, but when I opened the map view of Dynasty Warriors 9 and witnessed its size, I became more exhausted and daunted rather than excited. About 80% of the map is plains with some clusters of forest, with a few mountainous regions on the borders and strewn about in the middle, a patch of snow up north and some water here and there.

At one point, a side mission took me to the snowy northern area where I decided to take a trip to the edge of the map to see how that’s done. Some games try to hide boundaries with unscalable mountains or endless seas. Some add some kind of insurmountable danger to push you back into bounds. Dynasty Warriors 9 opted for the inelegant invisible wall plopped down in front of you, but the best part is that the procedural generation algorithm placed enemies and crafting materials beyond the invisible wall. My character was hopelessly running in place while packs of tigers and nodes of crafting materials were happily existing a few meters in front of me. 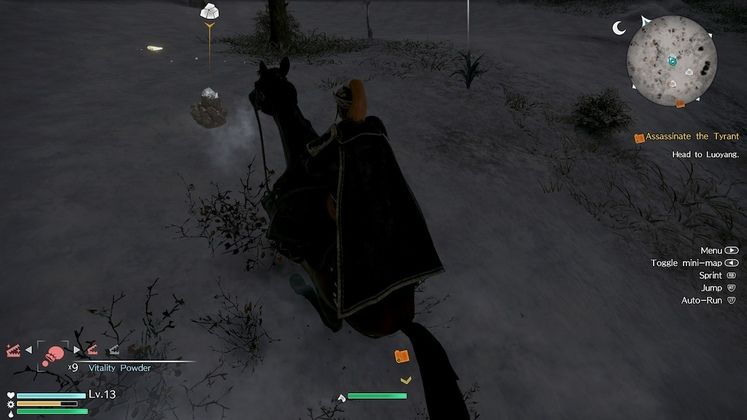 There is an invisible wall between me and that loot

Cities are pretty vast, but completely empty. Luoyang is the capital of the empire during a period, and when visting it outside of specific missions that take place there, the entire city is completely deserted save for a pair of guards at each gate plus ~10 NPCs grouped into a cluster of 3 buildings who are your standard shopkeepers, found in a corner of the settlement. The entire “capital” was empty. The game features no NPCs who aren’t enemies, friendly soldiers or shopkeepers - basically, there are no citizens.

The map is, however, dotted with umpteen army camps and bases. At any given time in the game, there are precisely two factions warring against each other, and you’re always supporting one. There is some measure of a persistent war going on in the open world that you can affect - capturing bases will move the frontline, helping your soldiers push forward or better defend your areas. Random roaming enemy officers can put up decent resistance, but they too are too little to make the game challenging. This system feels like the beginnings of what may have been an interesting persistent war mechanic, but never got fleshed out.

Visually, the game fares poorly. I’ve never been too harsh on the graphics of any game, since I place both story and gameplay above in terms of importance, so this is hardly what damned Dynasty Warriors 9, but I know many people consider this a major factor. The game is far from being outright ugly, it’s just not up to 2018’s AAA standards. The most work went into the models of the playable characters, and this shows, but instead of bringing attention to the craftsmanship of those models, the discrepancy instead constantly highlights the poor quality of everything else. The player’s horse, particularly, looks really bad, which is made the more obvious because the rather good-looking character models are sitting on it. 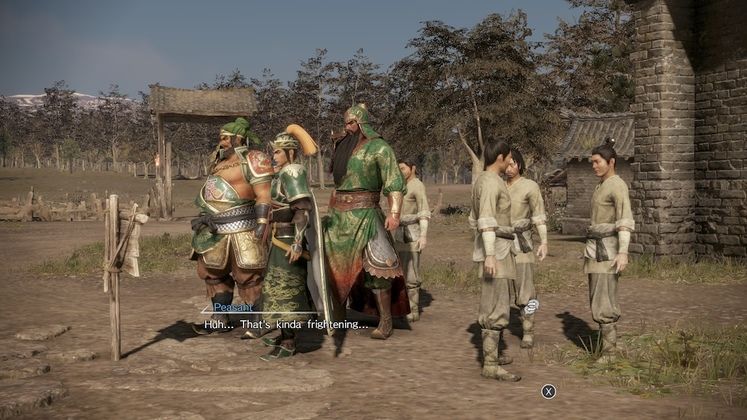 Asset repetition is constant. Forts, villages, and most noticeably, enemies basically never change. You’ll kill the same later-Han Chinese footsoldier a million times. Captains are identical save for what weapon they carry, and once again the only exception are the boss characters, who usually become playable, explaining the greater detail. Visuals are further marred by bugs, such as floating props, flickering textures. From my previous story about going to the snowy part of the map, I also retained a bugged omnipresent storm which followed me everywhere on the map, and wouldn’t be scared off by fast travelling, advancing time at a bonfire or restarting the game, and the violently bright fog effects made my eyes hurt after playing like so for a few hours. It also reduced draw distance so I basically only saw what was directly in front of my character, but can’t decide whether that’s good or bad. 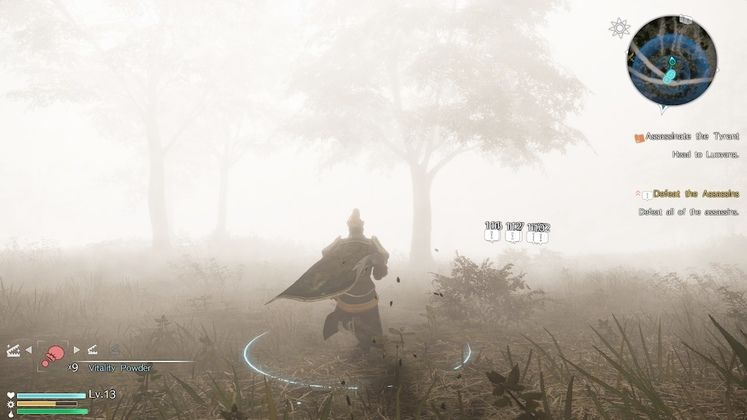 This fog was present even indoors

BUT none of that should be too big an issue so long as the gameplay itself is on point, right? I mean, people play Dynasty Warriors to live out a power fantasy about a one-person army wiping out literal thousands of enemy soldiers in ridiculously overdone ways. Even if the open world is lackluster, you can just ignore all the fluff and jump from battle to battle, right?

Well… yes and no.

Dynasty Warriors 9 has some pretty pervasive RPG elements, including a level system. Usually, when you play a chapter, unless you ground yourself to a state of severe overleveledness, the main objective will be around 10 levels above you. Now, such a difference usually doesn’t make encounters any more difficult or dangerous, only time-consuming. Regular opponents have to be way way above your level to be a real threat, but they do soak up damage like sponges if only a few levels above you. The whole “wiping out entire armies” thing becomes less exciting when the weakest footsoldier has 5 health bars and you can barely chip away a lick with each hit. This forces you into the open-world fluff content to gain XP, and side missions are even more repetitive than the visuals. 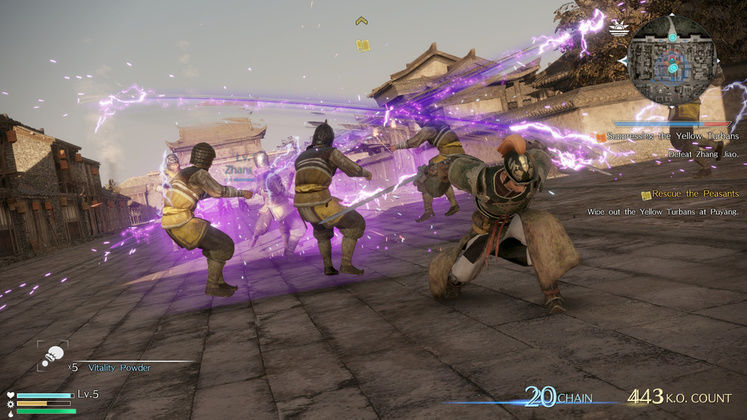 Get ready to kill the same dude 1000 times

At one point, two individual quest givers in the same fort gave me two quests, both of which had me go to the same forest and kill identical packs of wolves who spawned upon one another. Another had me kill bandits, and then an altogether different quest giver in a different settlement during a different chapter sent me to kill those same bandits again. These “requests”, as they are called, reward you with XP and crafting materials, and are sometimes used as a vehicle to introduce features in the open world.

The developers seemingly worked by the most cynical description of an open world game without realizing it. Alongside the oppressive size, constant repetition and lack of variety, the game is also bloated with side activities. You can cook, you can craft, you can hunt, you can fish, visit scenic locations, climb watchtowers to reveal parts of the map (seriously…), buy houses which you can furnish, collect old coins, and smash randomly placed boxes (which sometimes float mid-air off the side of mountains) for loot. To help you traverse this vast world, you have a mount which you can call at any time, but the poor steed isn’t without its own issues, such as entering water on horseback so that the steed is ankle deep will magically make the whole character glisten with wetness.

Once you’ve trudged all through that, you finally get to the actual battles and fighting, which are this game’s redeeming quality. Wailing away at huge opposing armies, wiping out hundreds of enemies in a single encounter, unleashing special abilities accompanied by charmingly awkward catchphrases and magical lasers, explosions and shockwaves is genuinely fun, but once again, repetitive. You only have so many moves and attacks, and combat is only minimally affected by weapon variety, which is lower than in other Warriors games. Dynasty Warriors 9 really loves its sharp things on the ends of chains. Nonetheless, combat is fun, and when the game finally lets you partake in truly large battles, there is genuine enjoyment to be had. Not that major battles aren’t without their caveats. A grappling hook makes any kind of sensible siege gameplay moot, because the overpowered main character can just climb over literally any wall and hack up the enemy army within anyway.

There isn’t too much to say about the storyline. It’s mostly the same fare as what you get in other Dynasty Warriors games. The plot begins near the latter years of the Han period, and each character has their own storylines which often intersect, but the writing is pretty weak and the plot isn’t much more than just an excuse to funnel players into various battles with various bosses. As you progress with some of the characters, you meet and unlock the latter ones. 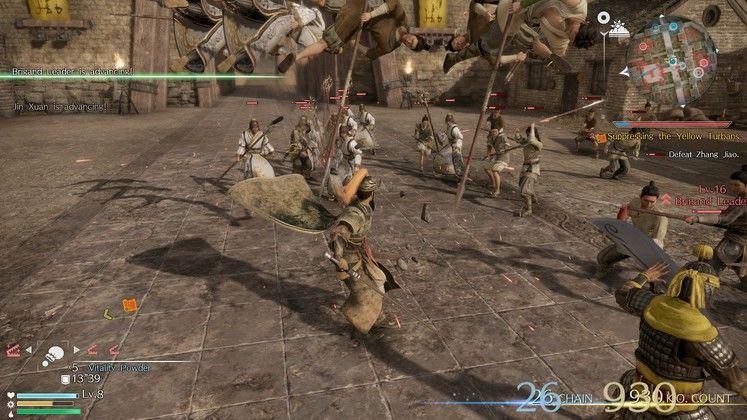 You can knock enemies into the air, jump, stay in the air, and hack at them. Martial arts!

Dynasty Warriors 9 has some additional issues here and there, like poor pathfinding, enemy and prop spawning not done off-screen when in visual range, pointless padding, silly difficulty application - hunting high level animals on hard will have them split-second teleporting away from your arrows regardless of aim - and more, but these would be minor gripes if the game’s main aspects weren’t so broken.

Many players on PC have reported a range of performance issues. My not-too-old GTX 980 rig ran it at stable 60 FPS on medium, ~45 on maximum and I juggled options in custom settings to get the most out of stable 60 which was basically the same as maximum settings with some of the intensive stuff turned down a tad, but as it turns out many people get the game defaulting to the integrated graphics processor instead of the GPU, which is causing the issues. Bugs aren’t game breaking and the game never crashed on me during my 11 hours with it.

Dynasty Warriors 9 suffers from a lot of issues, most stemming from the terribly implemented open-world. Assets are reused, it’s buggy, repetitive, bloated, empty and bland. These shortcomings are made all the more painful by the obvious potential this game had, and how fun the base combat can be once players waded through all the other nonsense.

Conducting a multi-tiered attack on a city, wherein enemy captains had to be defeated to remove elemental buffs from the main boss, sequentially weakening him before the actual encounter and slowly taking over the city district-to-district. 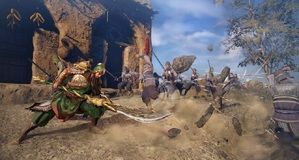