I’m in the fortunate position to have never suffered from dementia, nor have I ever been close to anyone who has suffered from it. Those who have may find Ether One, White Paper Games’ debut exploratory adventure game, a poignant experience. It may not educate or inform those completely unaware of the degenerative cognitive illness, but it does facilitate a very interesting interactive platform to depict a very real and very relatable story involving the disease, nonetheless.

One thing that drives me absolutely mad whilst reading game reviews is spoilers. Those who read reviews by and large do so in order to make more informed decisions before purchasing games. It baffles me, then, when writers decide to ruin this entire experience for readers by including spoilers in their reviews. Sometimes small spoilers can’t be helped; ones which impart trivial facts but avoid revealing too much about the game in question - therefore without really ‘spoiling’ anything. But major spoilers, even when beset by crude [SPOILER] indicators should always be used sparingly, in my opinion. As you can imagine, whilst writing reviews I do whatever I can to avoid revealing too much.


The problem with White Paper Games’ Ether One, however, is that there’s so much I want to divulge at once that I feel perilously close to full blown hypocrisy. In my younger years, I used to judge the quality of games by how much they crossed my mind once I’d stopped playing them. I understood that visuals and game mechanics were factors which facilitated this notion, but this was still the general method of exposition I relied upon to mark my enjoyment. Ether One is above and beyond one of those games. So much so I’d love to spill my guts about each and every one of the game’s quirks and idiosyncrasies. But for the purpose of consistency, I’ll try my best to hold it together.

Ether One begins in the not-so-distant future, introducing the player as a ‘Restorer’ for Ether, an Institute of Telepathic Medicine. Immediately, similarities can be drawn between the Ether institute and Aperture Laboratories, not least the sprawling sterile corridors and harsh spoken English female overseer who guides the player throughout the game’s entirety. By interacting with patients‘ broken memories - via the originally named ‘Restorer machine’ - the player is tasked with reconstructing and healing certain memories, thus “clearing the mind of plaque”, using said memories to reinforce medical treatment. It is explained by the anonymous supervisor that the initiative is on its last legs before funding is terminated, and that failure in this instance is not an option.

By initiating the Restorer machine, the player is transported to a central hub named ‘the Case’ which essentially portrays the patient’s subconscience mind - in this instance, a 69-year-old named Jean. From here - by pressing T on the keyboard - the player can dot back and forth between Jean’s memories for further exploration. Those familiar with games like Myst and To the Moon will feel right at home as Ether One is truly a love letter to the narrative-laden pen and paper adventure genre. I actually found myself likening areas of the game to other titles on several occasions, and although it felt likely this was a deliberate design choice by White Paper Games, it never felt at all malicious; feeling more like a celebration of its inspirations, whilst completely maintaining its own identity.


Story prompts are located throughout the fishing village of Pinwheel, depicted by red ribbons which act as segments of individual memories. Cumulatively, these combine to create ‘core memories’ wherein the player can unearth significant details about events within Jean’s life. Locating these ribbons is merely a case of exploring the beautifully hand painted, low-poly environments, which is a joy in itself as collecting notes and diary excerpts en route also opens up the rich and intriguing backstory. Although the player is the lone character roaming Pinwheel in Jean’s mind, these notes also illuminate the residents and the hustle and bustle of the fishing village once upon a time in reality.

The real joy of Ether One, however, comes from restoring the score of broken projectors scattered throughout Pinwheel. Although entirely optional, completing these puzzles is essential in uncovering Jean’s poignant tale which explores real life issues such as industrial decline, death, and the heart-wrenching process of understanding and accepting illness. With 20 projectors in total, hours upon hours can be spent working out each puzzle in whichever order you desire, without ever feeling unfair or deceptive.

The Case central hub delivers a very unique and interesting take on the inventory system which compliments puzzle methods. As opposed to the infinitely deep Mary Poppins-esque pockets adorned by most protagonists featured in this particular genre, the Restorer can only carry one item at a time. Items can be swapped within the memory-scape like for like, however if an item is thought to be of particular use, but perhaps not immediately so, the walls of the Case are lined with shelves whereupon items of interest can be stored. Much of the items within Jean’s thoughts are useless, but it’s up to the player to discern between junk and jewel. Quite often, items collected hours prior are required to crack conundrums further on, resulting in a fair bit of head scratching and shuttle runs to and from the Case. On more than one occasion, I found myself cursing at my screen, throwing down my mouse, and storming into my kitchen to cool off. I’d then bound back through to the bedroom room, oh, five minutes later, grinning from ear to ear as I’d finally cracked the riddle in question.

At first this euphoria feels implicit to the your detective skills, that, as the player, the reward for so much mind-bending lateral thinking is being treated to another snippet of story. But it was only as I played, as I delved deeper into Jean’s story, that I realised Ether One was probably conveying something more. This method of making sense of the world, of tackling puzzle after puzzle, of understanding which objects go where, is perhaps a symbol of the struggles of dementia itself. I’m well aware that I’m hovering around spoiler territory here, but the reason I feel it’s appropriate is because I’m not entirely sure. Ether One is deliberately open to interpretation, as is mental illness - particularly those which at this moment in time cannot be cured. Ether One provides a platform to explore dementia - a very common incurable mental illness - for anyone who has had direct experience in the past, whilst delivering a subtle rudimentary level of understanding to those who haven’t.


Which is exactly why Ether One’s ending makes sense. Although slightly surprised at the restrictive nature of the game’s end - given the level of freedom afforded during the rest of the game - it is a remarkable climax. Again, in the interest of consistency, I can’t, and frankly won’t, say anymore. Please experience it for yourself.

Eureka moments after hours of puzzling. 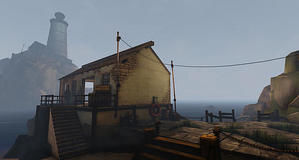