Europa Universalis: Crown of the North

Most of my problem with the game lies at its heart. EU: Crown of the North is a boring game…there I said it

First off, things rarely are darkest before the dawn. Things are usually darkest right before you black out. I found this little gem out when I had a vasectomy, took the drugs cause..”hey, why walk when you can fly?”..right? Anyway, after the operation I stood up too quick and voila…Great Truth Number one.

Number Two, Faint Hearts may have never won the hand of a “fair maiden” but I can bet they didn’t blow a wad of dough on stocks a naked hermit on top of ‘Ol Smokey could have figured out were ripe to tank.

Numero Trois; What goes around comes around…and herein lies the lesson for today. 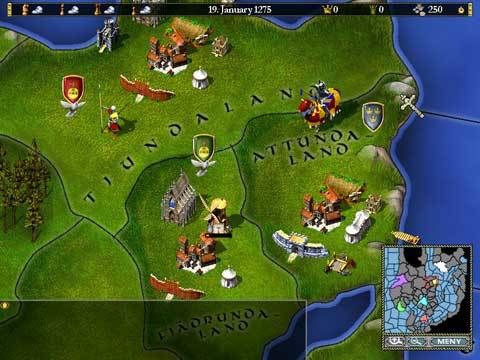 You may have noticed we have a New Guy around the strategyinformer…Chappy. Now you might think the New Guy should be some hapless pencil necked momma’s boy to be picked-on and abused until the next New Guy comes along. Well you would be half right. I know Chappy, we served together for a few years and while I fully support the “picked-on” idea; Chappy is the size of a small family dwelling and has spent the last 20-odd years in the Infantry, so it would be wise to abuse from a distance. Luckily for me, there are roughly 1000 kms between the strapping lad and me.

Now when Magpie decided he wanted fresh meat, I immediately thought of my ol’ pal. Chappy has recently retired from the service so I knew he was pretty much a ward of the state and had plenty of time on his hands. He has a degree in finger painting or something so I suspected he could string a few words together (one normally has to scrawl their name on the bottom of the canvas). So I dropped him a line and sure enough, between sampling recreational pharmaceuticals and growing his hair to his ankles, he was more than willing to try out the fast-paced, girl-a-minute career of “Game Reviewer”. 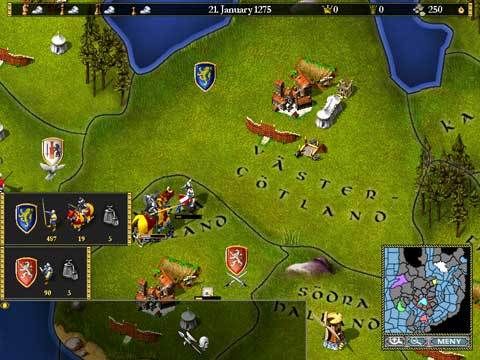 Now back the New Guy thing, I had received MOO3 (from Canker, now that I think of it…when I first showed up..hey!) and even though we try to be objective, rumors about really bad games still trickle down to us here in the basement. So I sent MOO3 along to Chappy..sort of a “hey man, we all had to feed the monkey when we first got here” type of affair.

I received an e-mail from Chappy about a week later, thanking me for sending him MOO3 as a first review. He finally had a chance to get in touch with his inner-rage, the game really opened up a new portal for him.

Well I laughed so hard, I damn near pee’d myself. Then my wife saw it and she had a similar reaction. Then the kids wondered what was going on and let’s just say the entire Capt clan had one helluva good chuckle. And then along came Europa Universalis: Crown of the North…..

Landing with a “thud” in my Inbox, I was a little nervous as the game looked to be very high-level strategy which can be a good or bad thing. I for one am a little shy of these types of games as they tend to overwhelm those of us who are casual in our approach and quickly become too much like work. 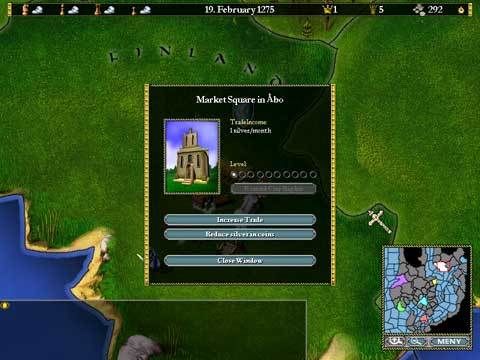 EU: Crown of the North is a stand-alone expansion of the original EU that has been released after EU:II, to be honest I am still trying to figure that one out. As an aside EU II, is included in the game and from what I could see is a much better game, worthy of it’s own review. But I like to stick with the “advertised game” because this is what the consumer is buying. To be blunt, however, I think EU II may be the sole redeeming feature of what I found to be a soul-numbing experience.

EU: Crown of the North is high (and I am talking the cold dark vacuum of Outer Space here) strategy. The game is based in real-time, as days will click by in seconds or faster as you can set the speed of the game. 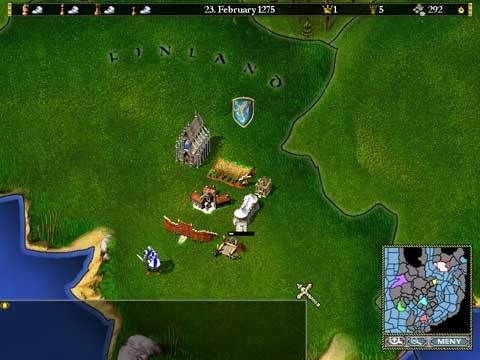 Set in the Medieval Netherlands (Sweden, Norway, Denmark etc) the game puts the player into the pointy shoes of a Baron/Prince cira 1200 AD. Thanks to vigorous inbreeding; buckteeth, large ears and an arrogant drive towards a power one cannot possibly hold on to, seems to be the order of the day for the local aristocracy. This, and of course trying to kill your other relations (distant and otherwise). The game spans the period from 1276 to 1340 and sees the player trying to unite the Northern Kingdoms into one homogeneous mass. There is a peacenik victory option which allows one to win through aggressive hugging and the social policies which just scream “medieval”, like taking care of peasants instead of using them for target practice.

The game itself is played from an Axis and Allies/Risk-boardgame point of view. From here you are given provinces to rule over and do all of the normal things one would expect; collect taxes, build forces, grow wheat and deal with clergy. You purchase improvements, which rather than being actual new buildings are in fact upgrades to existing structures that allow for more taxes/soldiers/ships/wheat/whatever.

This makes the game rather linear in my opinion as you really are stuck with what you have with limited ability to strategically disperse resources. New units are interesting but as the combat consists of watch numbers flick downward, you don’t get any real feel for their capabilities. 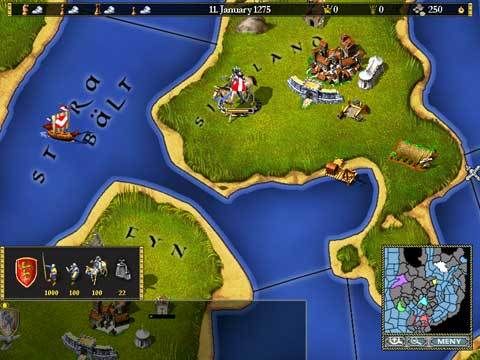 The interface is very simple, left and right clicking will get you info and actions as one might expect. This part was quite clean if not exactly inspired. You interact with your neighbors thru diplomacy that has the standard send gift/threat and declare peace/treaty/war stuff. You cannot send troops into another province unless you are allied or at war with the receiving kingdom (which makes sense), movement being a fairly simple chess-like affair.

You build troops by mustering them in your provinces and then send them out to lay siege and overthrow other provinces. Meanwhile you must manage your resources at home to ensure you can keep the lads in the field. Combat is a strictly die-rolling affair where forces clash and numbers counting backwards represent losses. Sieges are much the same except it takes some time to bring down enemy walls and in the meantime enemy defenders may sally forth for some more vigorous dice rolling. 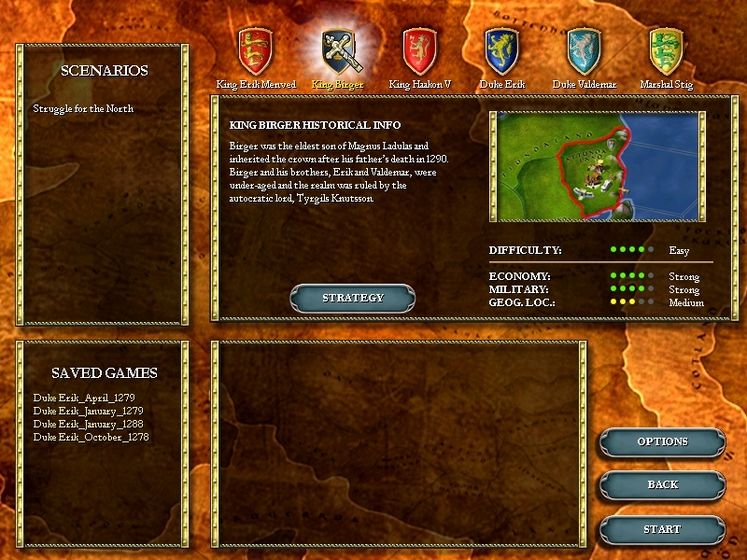 Your kingdoms population is made up of four types; nobles, clergy, burghers and the unwashed peasants. They will all have “feelings” for you which must be managed unless you want to be overthrown. Your peoples feelings can be manage thru actions within the kingdom (ie freeing slaves, levying taxes etc) thru your structures. Or thru random medieval events which force you to make moral decisions that impact your popularity, wallet and honor.

Honor is an abstract in the game that impacts your victory points based on your actions. Declaring peace or war will have positive or negative impacts as will how you react to the random events. 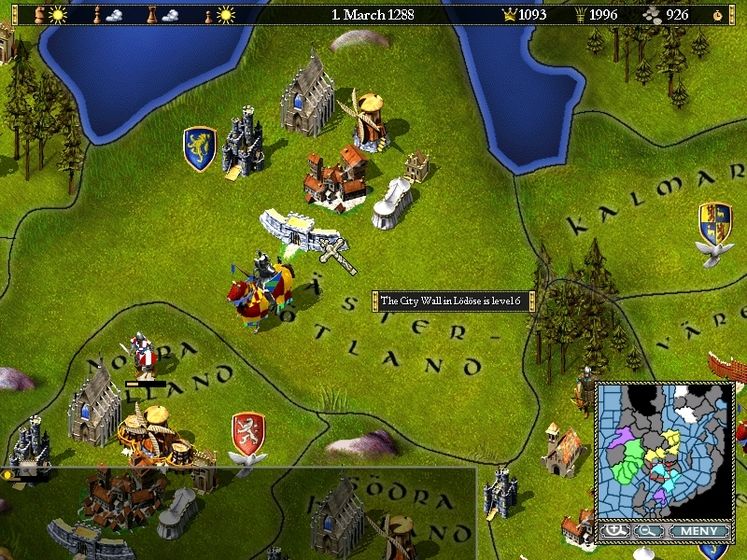 This all being said, I found EU: Crown of the North about as much fun as watching paint dry on growing grass. The game tries to be simple and fun; it succeeds on the first count but fails on the second. Simple interfaces and rules do not mean “shallow” in my opinion, but I guess this is where I fundamentally disagree with the developers of EU: Crown of the North.

The game played a lot like those “reading adventures” which were popular when I was a kid…”if you want to go in the castle, turn to pg 73..if you want to gut the troll turn to pg 76” the impact of your decisions are too blunt and combat is positively mind numbing.

There is a multiplayer aspect to the game but boardgames are fun because you can drink beer, bad mouth each other, make deals and generally interact with other human beings. Doing this over the net is somewhat of a pale comparison.

EU: Crown of the North is not a complete loss, the soundtrack was very cool, the graphics crisp and colourful if somewhat dry. The game ran very well and shows quality in production so no complaints there.

Most of my problem with the game lies at its heart. EU: Crown of the North is a boring game…there I said it.

Buy it for EU: II if you really want too (or go get EU:II in a better package deal) but I would steer clear of EU: Crown of the North if you are in the market for a computer board game. If you want an excellent fun strategy board game in a great package, go buy a box of Cheerios with Computer Monopoly as freeware. 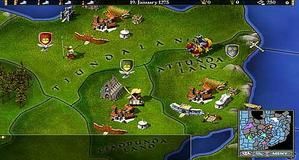