Seriously, does anyone know what “Face Noir” means? The “Noir” part I get, it’s a moody film noir-influenced adventure game so that at least sets out on the table what type of atmosphere you should expect, but “Face”? I’ve played the game and I’ve still no idea. Maybe something to do with a clock face, as a twisted one appears now and again? I should just accept that it’s nonsense and move on, but seriously Face Noir? And why is it presented in a rip-off of the very distinct and recognisable Bioshock logo? When you can’t even get past a game’s title you know that doesn’t bode well for the contents.

Anyway, Face Noir is the story of… hang on, why don’t I let you guess? It’s got “noir” in the title, what do you think it would involve? A grumpy private detective with a troubled past and a drinking problem? Perhaps one who was once a police officer and was framed and put in a prison for a crime he didn’t commit? Called “Jack”? Takes a simple case and gets embroiled in a bigger story that sees him framed for murder and then out to clear his name and catch the real killer? Throw in a little girl and some unexplained psychic powers that aren’t so much to make the plot interesting as provide easy exposition and you’ve got Face Noir. Seriously, the ‘Dixon Hill’ holodeck stories from Star Trek: The Next Generation showed more imagination in creating a private dick story. As the “film noir private detective 3D adventure game” genre already boasts the sublime Discworld Noir it’s an uphill struggle enough already.


The plot simply doesn’t gather much in the way of interest, and that’s not just because it’s badly told but also because the writing is just plain terrible. Why does the main character keep swearing in Italian other than to remind us that the game is a badly translated Italian adventure? How does “$30 a day plus expenses, in advance” work since Jack has no idea how long he’ll be doing it nor what his expenses will be? A barkeep asks Jack how he’s going to pay for his whiskey, and the one answer you can’t give is “with the stack of money I’ve got in my pocket” – instead, you have a silly puzzle. More on those later.

It makes things worse of course that the characters are so utterly bland. Main character Jack Del Nero doesn’t seem to have any real motivation other than he’s a private detective in a film noir story. There’s a nice cop, a hard-ass cop who’s on Jack’s case, an unhelpful landlord, some racist stereotypes, nothing particularly... wait, what? Oh yes, every other character in the game is racist in some fashion (and I’m not sure about the American characters either) and at the very least poorly voiced. A penny-pinching Russian landlord, a Irishman who comes packing whiskey, a Chinese cab driver... oh dear god, the Chinese cab driver. He’s a major character in the game for no apparent reason, and would simply be marked as “poorly voiced” rather than “racist”... except the subtitles make it clear that he was written as saying all his ‘r’s as ‘w’s. “No way, I get in twouble! You not vewy nice!” That type of thing. Again, major character here. So that’s writing out the window, and did I mention the poor voice acting? Good, so let’s move on to complaining about the puzzles.

Now, forgive me if I’m a little naïve, but I think the best adventure game puzzles in general give you a goal logically connected to the plot, give you the things you need to reach that goal, and then let you work out (with a few hints perhaps) how to put those things together. Generally speaking Face Noir does the first point correctly as all the puzzles seem appropriate to the plot, although woe betide you if you don’t play the entire game in one sitting since it never bothers to remind you what those goals are. Face Noir also does indeed let you do all the heavy-lifting with regard to puzzle solving, although there’s an utter lack of hints and the “interactive hotspot highlighter” is bafflingly both located on the inventory screen and not called attention to. Once you have all the things you need to solve the puzzles it can take a little while to do so but things all can usually be worked out fine. Except this is where Face Noir massively fails since developer Mad Orange does not like giving the player anything.


Solving puzzles in Face Noir isn’t about mental prowess, it’s about playing hide-and-seek – in one instance literally, with a young child behind a box. Seriously, the vast majority of puzzles in this game give you a general (or if you’re lucky, specific) goal then leave you to carefully scan every location for the correct thing to interact with. One time Jack suggests looking up a person in the phonebook. Where’s the phonebook? Calling the operator doesn’t help, nor does asking a desk clerk, your landlord or your friend Greta who owns a bar. It turns out the only phonebook in the game is back at your apartment, hidden on a bookshelf surrounded by dozens of similar tomes. Why was this a puzzle?! Why couldn’t Jack have said “I think I have a phonebook back at my apartment somewhere” to at least narrow it down to one place in New York? It’s pixel-hunting, the adventure game’s Achilles heel, at its worst – plus highlighting or holding the mouse pointer over an object doesn’t tell you what it is so you have to get Jack to describe everything. There’s dozens of moments like this in Face Noir, often reliant on finding a tiny speck in the background that’s of vital importance.

Then, sometimes, that tiny speck is actually completely invisible. One puzzle that really got me angry involved getting into a cop’s desk drawer. It’s locked with a colour-coded combination lock – what kind of office drawer is locked with something like that? Maybe in the Dwemer Ruins of Skyrim, but not f***ing Hoboken, New York. Whatever, unrealism aside, there’s three colours to figure out and no obvious hint as to the answer. Little did I realise at the time that there is actually no way at all in the game to solve the puzzle. That is, unless you know off by heart the flag colours of this cop’s country (nope, it’s not Red, White and Blue), because the vital in-game clue is totally obscured at this point because the room is in total darkness. And you can’t turn on the light-switch or use your torch anywhere but on the drawer. I’m sorry I’ve fallen behind on my Flag Studies homework Mad Orange, I’ll do better next time.


If I was to pick good things about Face Noir the best would be the interesting gameplay mechanics it brings along – I wouldn’t go so far as to say it invents anything new but these at least add interesting twists to puzzles. Object manipulation by dragging the mouse around (in a manner similar to Frictional Games’ Penumbra or Amnesia) is cool and regularly pops up, and while is mostly done for the sake of immersion occasionally it adds a neat puzzle twist as well. For example, pulling open a door a little might reveal something intriguing, but pulling it open all the way might reveal something vital. Better though is the dialogue-based “thinking mode” which works similar to Discworld Noir’s Notepad except is entirely conversation focused. When making an accusation the game switches to this mode and all the clues you’ve uncovered pop up on screen, and to go through with the accusation you have to link two relevant clues together. Unfortunately finding these important clues furthers that “hide and seek” attitude to puzzles I’ve already mentioned that Face Noir suffers from, but it’s neat nonetheless. Also the game looks fairly nice, although animation is so choppy cutscenes almost entirely consist of static images.

Face Noir tries its best to be a compelling Raymond Chandler-esque film noir detective adventure and falls flat on its noirish face. The story is boring, characters are either bland or straight-up racist, acting is mediocre, writing is worse, cutscenes are mostly static photos, and the puzzles are a string of “find the important thing the designers have hidden” moments rather than any genuine brain-teasers. Yes it looks kind of nice, and yes there are a few nice ideas scattered around, but the good points of Face Noir are harder to find than a flag in a darkened office.

Probably the beginning where Jack seems to get shot, but then thanks to crappy 3D animation as soon as he falls over dead he’s immediately back on his feet again. 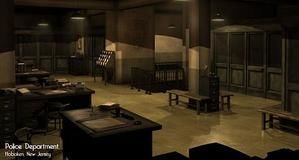