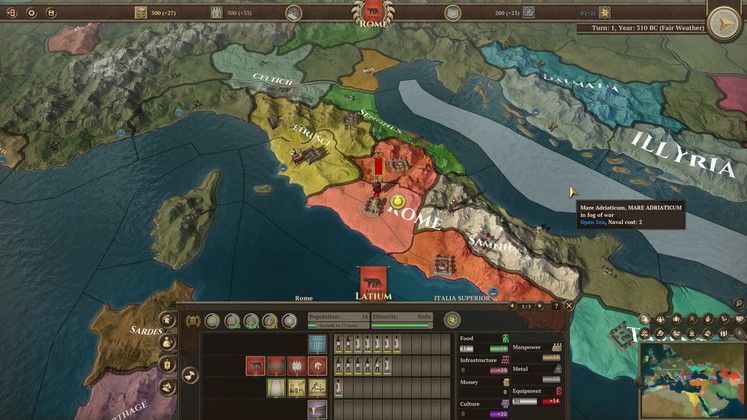 Hot off the heels of Paradox’ Imperator, comes Field of Glory: Empires. A wargamer’s reprieve to Imperator’s botched launch, this grand strategy game was built as a standalone companion to Field of Glory II, adding a huge campaign map that feels more like a board game than the kind of intricate simulation that Imperator and Total War: Rome II strived for.

Taking place during Ancient Rome, FoG: Empires features two scenarios: one based during the early days of the Roman Republic and their conquest of Epirus, and a “Grand Campaign” one that features most of the Old World all the way to the Indian subcontinent and mirrors Rome II’s identical title mode. 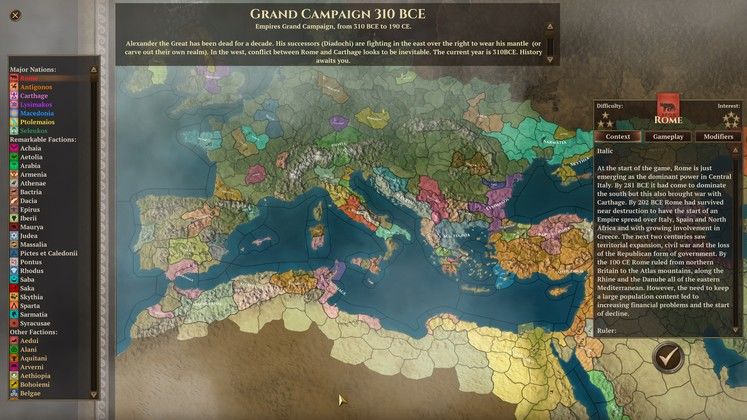 The map is immense, depicting everything from Britain and western Europe/Africa to the eastern reaches of the Seleucid Empire. It also features a gigantic amount of factions, which are pretty much all playable, and complete with their own rosters and cities. Unlike FoG2, Empires is focused on a map-painter approach, focusing on running the whole empire and multiple cities and not featuring a battle mode - battles are auto-resolved in a Civilization/Paradox like fashion. The main gameplay loop of Empires is divided between those battles and the economy part, requiring you to manage provinces to fund your campaigns.

Each city can have several buildings from four different categories, such as infrastructure and economy, which must be staffed by the people living there. In order to achieve the highest efficiency, players must deal with the population, making sure to assign slaves, citizens, and more to specific jobs they are most suited to perform. The military side mainly revolves around recruiting and maintaining troops - from light and heavy armour infantry to skirmishers and cavalry - and marching them around, paying attention to their status and supplies. 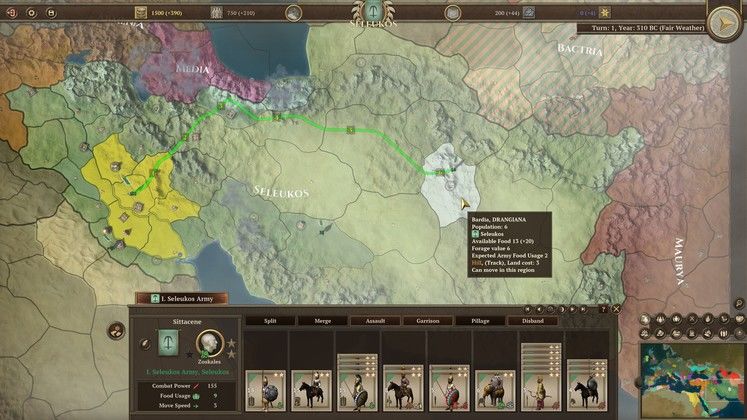 Battles themselves range from field skirmishes to sieges, which are infuriatingly handled like die rolls. When laying siege to a town, the game calculates the odds of a phase being successful or not, which ends up generating some very weird situations where 30 turns go by before a city is taken – sometimes it ends with a superior army losing the battle to a skeleton crew that should be starved 15 turns prior. The field battles are a bit more bearable, as they mainly rely on math and are thankfully solved on the spot.

While Empires features no tactical engagements, one of the game’s main unique draws is the ability to export those campaign battles to the FoG2 engine if you own both products. This functionality allows you to fight the battles yourself in FoG2’s turn-based battlefields and import the results back to Empire, giving you the full experience of campaigning and battling. It is an interesting proposition, but can be a bit clunky from an engineering point of view due to the loading and multiple windows, especially when compared to Total War. 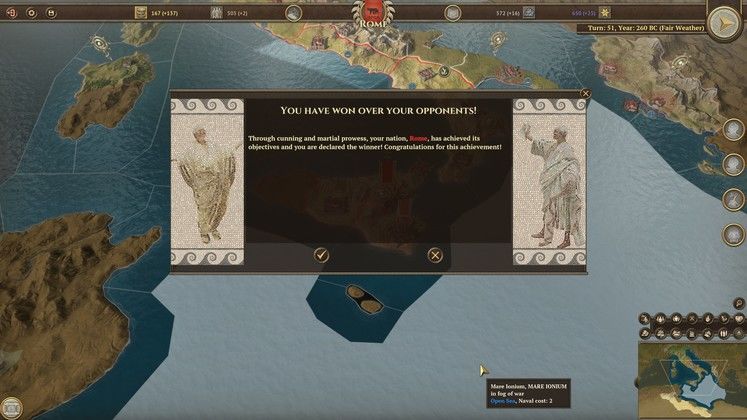 In typical wargame fashion, the game can be very obtuse in some regards. Aside from the siege battles mentioned before, FoG: Empires seemingly randomises some building options in the city screen, giving you virtually no control over what’s gonna be built besides rolling the dice and waiting several turns for the options to rotate. Similarly, an extremely frustrating aging/decadence “token” consistently shows up to ruin the fun, acting as a very arbitrary gamey mechanic that immediately reminds you that yes, this is basically a tabletop and you are not meant to be immersed and embodying the spirit of Caesar.

However, my biggest issue hands-down is how FoG feels. The map graphics and UI look at least a couple of decades old, and ending a turn requires not one, but two loading screens; first a processing bar, then a very blatant immersion breaking scoreboard screen with a second processing bar. FoG: Empire is competing directly with Imperator: Rome, and its outdated presentation could count against it. 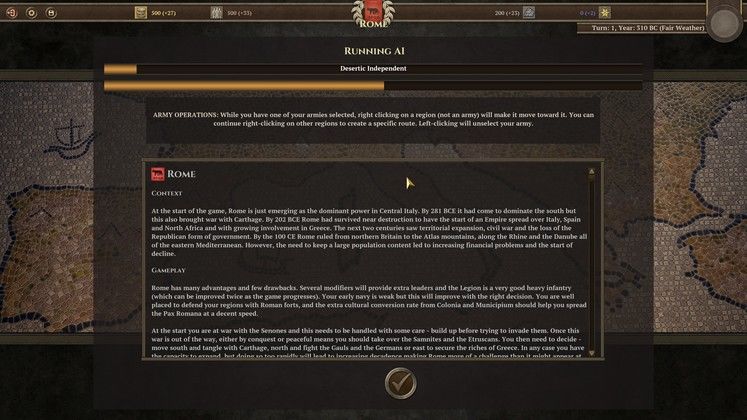 FoG: Empire doesn’t really add anything that was missing from any other grand strategy game, and all of the glory, character, and scope of the Roman Empire is virtually nonexistent, perhaps feeling instead like a virtual version of a very charmless boardgame. However, if you’re a long time fan of Field of Glory (or a hater of Imperator or Rome II), this game might end being right up your alley.

A capable wargame that doesn’t add a lot to the grand strategy genre.

Capturing the whole Italian province in less than 30 turns. 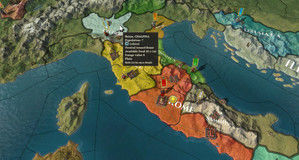