Everyone else already said “Domo Arigato Gato Roboto”, so I’m not gonna do that 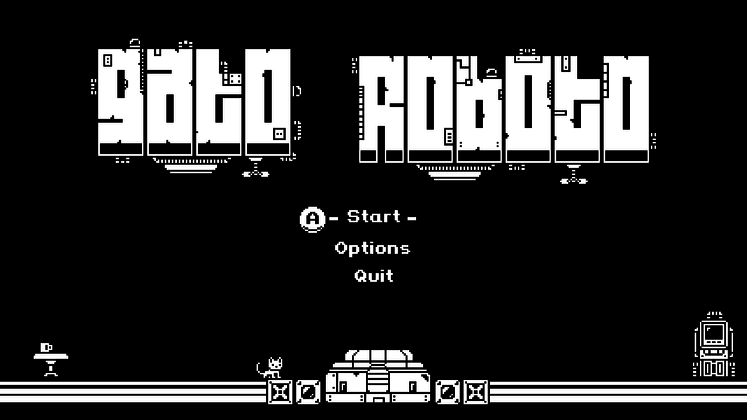 The one adjective I would use to predominantly define the indie scene is “throwback”. There are exceptions, but the main influx of indie titles involve pixel graphics and a gluttonous heaping of nostalgia. I don’t mean to sound harsh. It’s just a design sensibility prevalent in the scene and one that’s hard for me to be invested in. Imagine my surprise when I was thrown into the monochromatic world of Gato Roboto from Doinksoft to show me the inherent worth of the retro throwback.

Like the classic games it references, Gato Roboto tells a simple story of a space lieutenant’s crash landing caused by his feline Kiki. Injured by the crash, he entrusts his mission to explore an abandoned research facility to his pet. Kiki is able to find a mech suit in the facility and are the only one who can find out what happened in the facility. This is done through some retro platforming and exploration whilst being an adorable kitty. 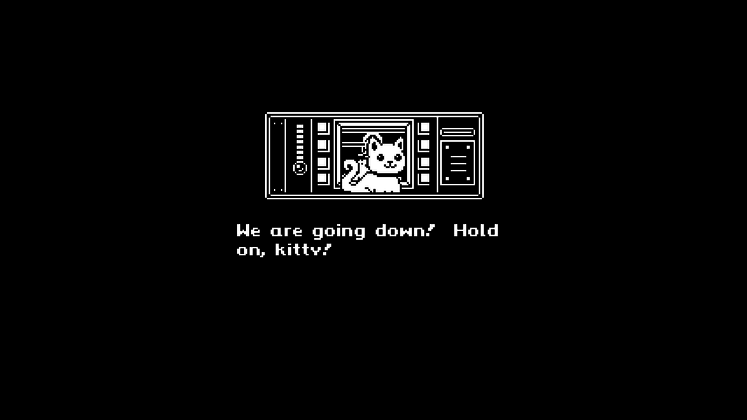 Gato Roboto knows it isn’t telling a grand narrative, but it tells its story confidently. It knows how silly the premise is, but the comedy never gets to the point of insufferability. It’s not a story of full-on belly laughs, but it did cause some sensible chuckles. This is helped by Kiki being an adorable protagonist. With only a couple chat portraits, they bring a delightful personality of just being a cat. It adds an absurdity that wouldn’t exist with another animal. There are moments it gets somewhat dark, but nothing that causes dissonance.

It’s the type of story you’d expect from a retro game, but it’s charming all the same. Sound design plays a huge part of that, and it’s able to be lofi without low quality (the Banjo-Kazooie esque talking in cutscenes being a fun touch). The only issue is with the music, and it’s more of a nitpick than anything concerning. It takes a more atmospheric route than melodic. It fits perfectly well with this abandoned research facility, but it is forgettable the moment you stop playing. It does make you crave some more melodic pieces, but what’s in-game sets the tone. 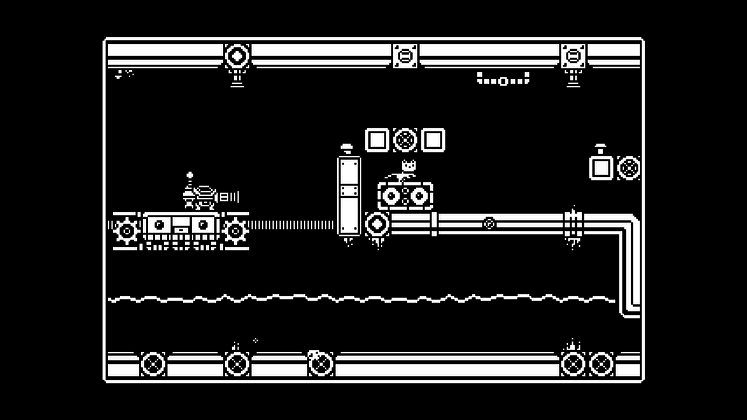 As a game, Gato Roboto is a Metroidvania that leans heavily on the Metroid side of things. So much so that you can remove the -vania entirely. You explore, you unlock additional powers, and you fight the creatures in the facility. Adding that extra depth to the jump ‘n shoot is the mech suit itself. You’re able to exit the mech, allowing you to run on walls and squeeze through crevices. In return, you have no health and firepower. It might make things trickier, but the game is really good at balancing that difficulty.

While not as brutal as the NES and SNES games it is inspired by, it isn’t easy. The challenges you face have that great mix of tough but fair. This is showcased during the Mega Man-esque boss battles against a talking mouse. The fights against him in his various mech suits are a highlight. They always feel possible, but they are still victories you have to earn. There aren’t any egregious spikes in difficulty, just levels that force you to focus and understand its systems. This fairness is even seen when you’re forced out of the mech. Everything is telegraphed, so it’s always possible to dodge certain death. I might’ve died more than I would like to admit, but every mistake felt like mine rather than the game’s. 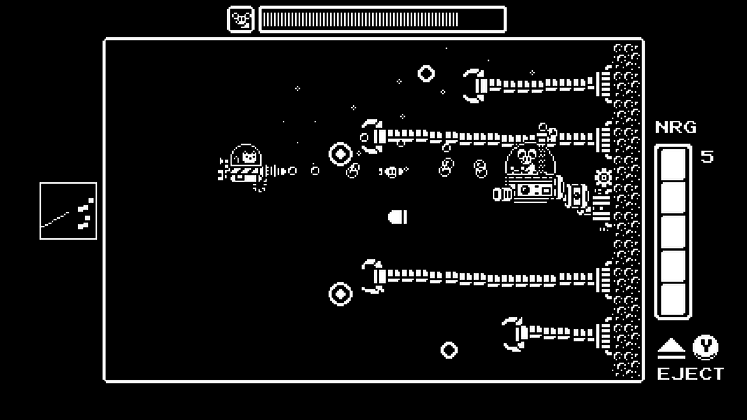 It wouldn’t be a proper Metroid homage without exploration, and what we get there is also engaging. There are four things you can find: additional powers, medkits to increase your maximum health, journal logs to gives context to the story, and cartridges. The former three are self-explanatory, but the cartridges add something fun. Besides being another way to upgrade your mech, each cartridge you grab gives a new color palette ala Downfall or Luftrausers. Even though the default is my personal favorite, there’s a real joy in finding these carts and the palettes you’re able to try.

Gato Roboto is a short game, noticeably so. I was able to beat the game in two and a half hours with 60% completion. This can be a dealbreaker for anyone who believes that length should be a factor to cost. However, this is also a game without filler. There aren’t moments where you get stuck like other games in the genre, and the backtracking you partake in isn’t tedious. It’s able to have the spirit and style of a Metroidvania without the busywork. 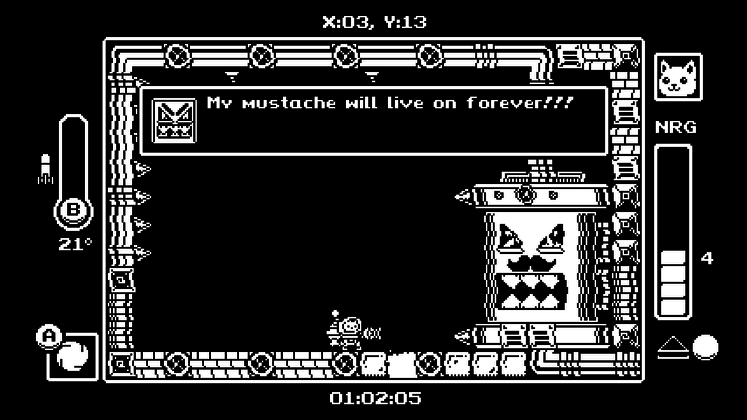 While it might leave you wanting more, this is a game made with speedrunners in mind. There’s even an achievement named Save the Animals after the memetic term used in Metroid speedruns at GDQ. It’s short enough to be replayed easily, finding ways to shave off your time. Getting in the mech shows you how long you’ve been playing, giving potential speedrunners a reference point. While I would never become a speedrunner on account of factors like “being bad at video games”, it will be amazing to see how runners will play this game in the future.

It’s a 2D platformer with two colors. Suffice to say, it’s not a drain on resources. I’d be surprised if your computer couldn’t run it. But don’t worry about laziness, its simple aesthetics are used to their fullest. There’s a clear differentiation between levels thanks to its subtle details. It also helps the game feel, Doinksoft knowing that a bit of screen shake goes a long way. The only concern graphically comes from the previously mentioned palettes. Depending on the one you pick, it can be harsh to the point of noticeable eye strain. If you’re someone with sensitive eyes, don’t stray from the default. 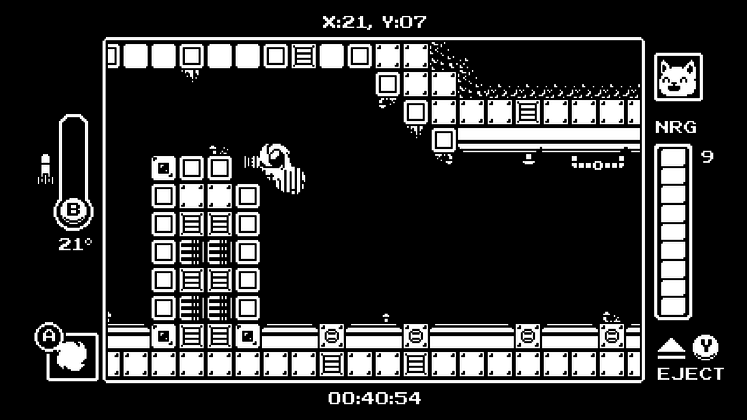 I’m someone who finds it hard to care about retro homages, and Gato Roboto is the exception to that rule. It’s fun, its challenge isn’t overwhelming, and Kiki is now part of the pantheon of gaming’s cutest cats. The short length might be a source of contention in the future, but I’ll gladly take something that lasts as long as it needs to over something that meanders a couple extra hours. This game is not only an exceptional love letter to a bygone era, but its modern sensibilities don’t get in the way of the challenge. If you love the design of retro games but wished their difficulty was balanced rather than frustrating, Gato Roboto scratches that old-school itch.

Fighting a boiler with a mustache. 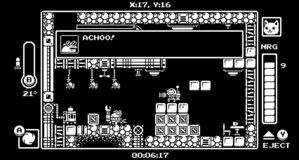 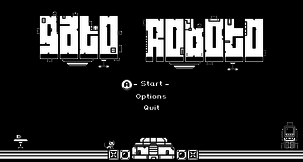