In conclusion, Highland Warriors is a game probably best enjoyed by any users new to this style of game - veteran players will complete the game within 48 hrs & remove it from their drive

Highland Warriors is the new historical game from Data Becker that tries to be different. Set in Scotland at a time when the English were trying to rule, the game follows the fortunes of either one of three clans (rebels?) or the English occupiers. Although being fairly accurate, history wise, there is no feeling of “being taught” too much, it is just pleasant to see historical events reflected within the game. 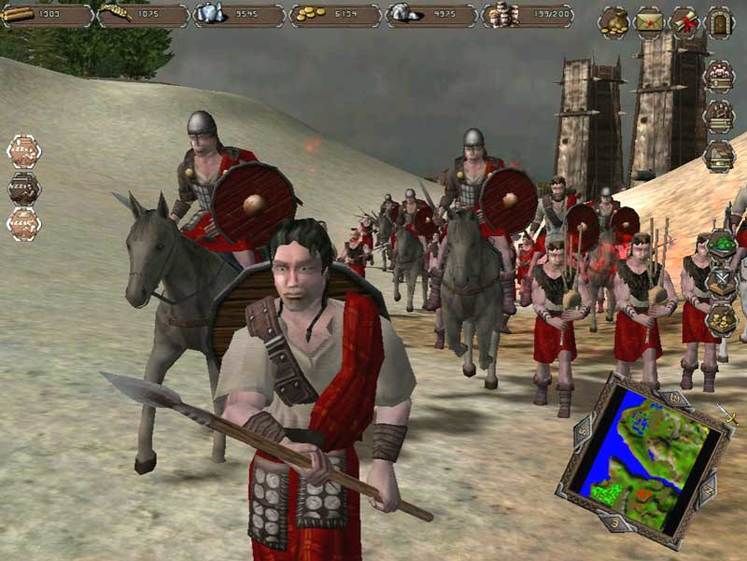 The game installs nicely, does all the normal system checks etc, and warns you if it thinks your system is not up to the job. Game options are easily accessible (and changed) to suite the level of your processor (and more importantly, graphics card) and it should only take a minute or two to have the game running to the highest level it can on your particular PC. The manual supplied is superb (I’m a great believer in manuals) and helps out with all game aspects. In addition, the three tutorials adequately cover all the main features of the game, with a learning curve pitched just right for anyone new to this type of game.

Game controls follow the normal RTS pattern, left clicking to select units, right clicking to move them etc. Grouping units as per normal, CTRL n (although no unit number is shown on screen) You also have total 360 control of the camera, allowing you to view from any angle & zoom in or out with ease - no more problems finding errant units hiding behind trees (although any unit behind an object is “blued out” to make the more visible. 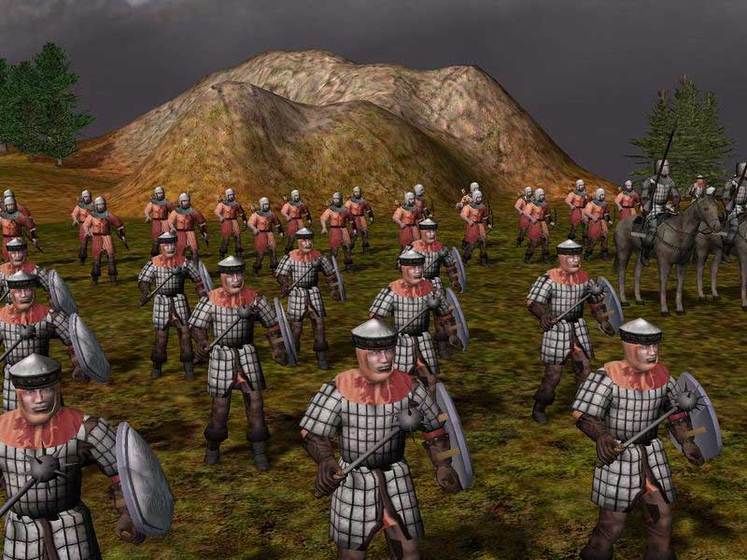 In addition to the standard peasants, each faction has its own units, each with their own individual strengths or weaknesses. Great care needs to be taken to utilise these to their best, but following the normal ”Mounted V Missile, Missile V Foot, Foot V Mounted” will help out in most situations. Add a smattering of magical characters to get “the edge”, as well as Hero units with skills of their own and others beneficial to nearby units and you have all the ingredients for some epic battles. Your military units can be set into various formations as well as one of 4 ‘stances’. Exactly how well any units obey your orders depends a lot on the stance chosen for that unit. For example, if you have a group of axemen set on Bloodlust, and you task them to destroy a building, they will attack any enemy personnel 1st rather than the building. If set on Aggressive, they will attack the building but take no notice of any enemy attacking them!

The micromanagement side has a couple of changes from the norm - peasants can develop & become masters of their chosen trade. This means that, once having achieved their masters certificate, they excel at their job. Moving a master to a different occupation however limits their capabilities making them much slower. You do not have to achieve the certificate, indeed it is best to ensure you have a pool of ‘yokels’ to use as & where needed, but if you refuse a certificate, that individual will not get the chance to take it again. Another addition is the seasonal element - basically, you can’t farm when there is snow all over the ground. As the seasons change, you need to switch from farming to hunting/scavenging or starve. There is also a welcome option re farming; clicking a button found on the mill popup allows for fields to fall fallow & new ones be developed automatically. As peasants are generated at the town centre, they can be automatically sent to where they are needed most - with the TC selected, a right click on any area sets a rally point, if the rally point is a mine, then the peasant will immediately start mining. 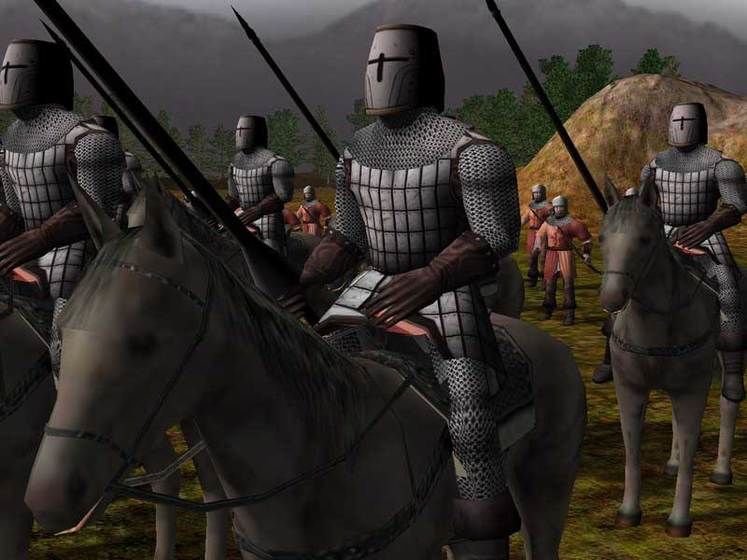 Game sounds are nicely set so that you can hear most aspects of “town life”; hammering, digging etc, animal noises etc. Battle sounds allow you to hear the men groaning as they are injured and the ringing of steel on steel, although this does tend to be a bit repetitious after a while.. The actual language spoken is a mystery to me - thankfully it is not English with a broad Scots accent, it appears to be somewhat Sim like - basically unintelligible (to my ears at least) yet somehow apt.

Game graphics are excellent, but it must be stressed that you DO need a good graphics card (Geforce 3 & above recommended) to get the best out of it. I use a Geforce 2 64 which tends to make them slightly shallow / washed out, but when I tried it on my friends with a Geforce 4, the difference was immediate, sharper colours, better definitions & much smoother. Building animations are well above the norm and watching a building being destroyed piece by piece is just another example of the fine attention to detail provided by the graphic artists. The actual battle graphics are a bit suspect though - I found it hard to distinguish between the differing unit types and the actual death of a unit is like something from a Tom & Terry cartoon - the character just goes all stiff, falls to one side & disappears. 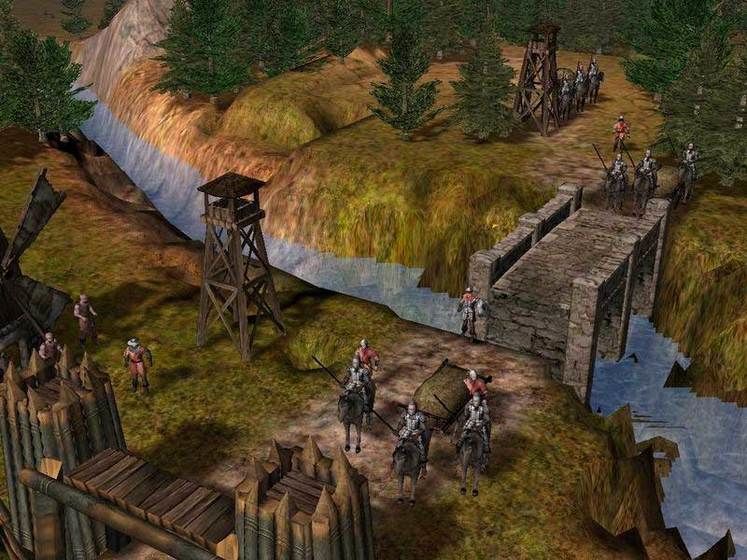 HW is very much a ‘biggest stick wins’ type of game. Once you have amassed a decent sized army (20 axe type, 20 claymore type, 20 heavy cavalry & a couple of druids/mages), you can pretty much take apart any defence force/settlement in the scenario without really having to reinforce them. Indeed, some scenarios give you enough troops at the start to finish the level (if you are quick), without even having to go to the trouble of building a base, and this can also become a bit tedious. Thankfully, the tedium is broken by the odd ‘different’ scenario requiring a finite force & some clever use of tactics.

In conclusion, Highland Warriors is a game probably best enjoyed by any users new to this style of game - veteran players will complete the game within 48 hrs & remove it from their drive.

In conclusion, Highland Warriors is a game probably best enjoyed by any users new to this style of game - veteran players will complete the game within 48 hrs & remove it from their drive. 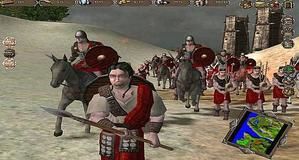