Hoard is a game where you play a dragon flying around destroying villages, capturing princesses and plundering treasure. Doesn’t that sound like a lot of fun? It would take a supreme lack of effort to make such a wonderful idea go bad. Sigh.

Unashamedly a casual game, Hoard’s main mode sees you (as a fire-breathing flying lizard) gathering treasure by burning down villages, deliveries, knights, and anything else that carries money. Big payoffs include capturing princesses for a ransom (I didn’t realise dragons could write ransom notes), stealing huge jewels from wizard’s towers and taking down giants. In the main mode you’re set against the clock to see how much coin you can purloin in ten minutes.


Simple in idea and relatively simple in execution, with a few complications to spice it up. Other dragons for a start, up to three, computer or player controlled. You can also only carry a certain amount of treasure at a time, so you often have to judge between destroying another wine cart and offloading what you have. There’s also a tribute system around towns, which you receive regularly if they fear you.

There’s also a basic RPG structure, with XP earned allowing your dragon to upgrade his speed, firepower, treasure carrying and armour. I wish Big Sandwich (great developer name incidentally) had included more than just icons alongside upgrades, a description would be nice. I mean, what does a picture of a dragon mean in a game where you play as a dragon? It’s “speed” incidentally, which I only worked out by process of elimination.

Alongside the main Treasure mode there’s also Capture The Princess (capture and keep 15 princesses first), Hoard (survival, which makes no sense calling it that since it’s the only mode where you’re not hoarding anything), and co-op. All bar the survival mode can be played online with other people. There’s a large selection of maps too so there’s a decent amount here for your £6.99.

However, I am utterly astonished that there’s no competitive co-op mode, like 2v2. This would’ve been a lot of fun and might have raised the score a good 5-10%. As it stands though while there’s a good array of options I honestly don’t know if you’ll persevere through all of them.

Hoard is certainly fun and even addictive at times. If you start playing you’ll certainly finish at least one map due to the ten minute playtime, which is just right for a game like this – fifteen minutes would just be overstaying its welcome.

The CPU opponents in the game are a bit easy though and I never had problems defeating three of them, even when the swines decided to team up and kill me (which they never did amongst themselves, cheating sods). Death isn’t game over luckily, you just lose what you’re carrying and are sent back to your Hoard to recuperate for a few seconds. Annoying, but you’ll never lose your game because of it.


There are numerous flaws in the game, but there are two major ones that utterly cripple all sense of fun. The first involves the player progression between levels – there isn’t any. You can’t continue your game to the next stage, and all the levelling up you did is lost. I can’t play RPGs more than once usually because it feels so weird having to go back to being an underpowered beginner. In Hoard that happens every time you play the game, and it feels just as weird.

That’s forgivable slightly on its own, but it does lead into the next problem which together stifles any enjoyment from the game. Simply put, there is absolutely no satisfaction gained from victory. This is absolutely essential, Gaming Law Number 1. Winning in Hoard goes like this: time runs out, the game ends. Basic score sheet that you could get just by pausing the game. Continue/Retry, and Continue dumps you back to the main menu. That’s it. So what if you had the best score, the game doesn’t care and neither should you.

At least Solitaire has the cool bouncing cards to give the player some reward. Even a message saying “Congratulation! You have beated our game!” would be more satisfying than this. Why no details on the scores, like how many princesses were captured or thieves killed? There are Achievements, but they’re separate from the game. This is an absolutely massive problem and I can’t overstate it more clearly: when I beat a level of Hoard, there is nothing to make me care that I’ve done so. No reward, no victory fanfare, no satisfaction. It gives you no reason to click anything other than ‘exit to windows’, which is made easier by it dumping you back on the main menu every time.

Same goes for multiplayer. No voice or typed chat (at least not on the PC version), no time to revel in the disappointment of a vanquished foe, it’s just game over, scorecard, next game or menu. Boring. While player-controlled dragons are certainly more intelligent than CPU ones and are definitely more of a challenge, there’s barely any sense of the “multi” in this multiplayer.

Want to hear a few other flaws that got on my nerves? Well, the music sounds like it’s been composed on a Commodore 64 being dropped down a flight of stairs for a start. It’s not irritating, but utterly without melody. A game like this really cries out for catchy Lemmings-esque music. Sound effects are okay, but there aren’t enough of them. Dragons should roar, knights should shout insults, giants should say “fee fi fo fum”, etc. Princesses sound like they had some effort put in here, if only every other character got that attention too.


Hoard is lacking in personality, and that goes for the graphics too. Yes, it’s meant to be simple and distinct, which it manages well, but it’s all a little drab. Why are “grass” and “snow” the only terrain options for example? It’s all so generic fantasy.

Hoard is quite an addictive little casual game when it gets going, but ruins it by giving the player no satisfaction from winning or reason to continue after one level. Combined with drab sound and graphics, the way it fails to explain some things properly and no sense of player progression, you have a game that manages to make you feel bored while playing as a dragon destroying the countryside. That’s something I’d never thought any game would manage to do.

Hoard is quite an addictive little casual game when it gets going, but ruins it by giving the player no satisfaction from winning or reason to continue after one level. Combined with drab sound and graphics, the way it fails to explain some things properly and no sense of player progression, you have a game that manages to make you feel bored while playing as a dragon destroying the countryside. That’s something I’d never thought any game would manage to do.

Capturing a princess and defending her from all those pesky knights who want to rescue her. Fat chance. 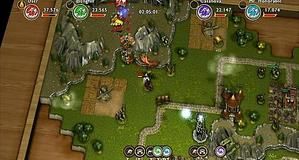