Jagged Alliance: Back in Action

Jagged Alliance: Back in Action Review

Chris Capel moves, pauses, clicks five times, has his gun jam and then dies. Many times

Oh, hello again Jagged Alliance: Back In Action. It seems only a couple of months ago (it was) that I was giving the game a thorough preview, now I’m coming back to see if the game’s hot and the ironing’s been done. Considering the pedigree of the Jagged Alliance series I’m not the only one who’d really hate it if developer BitComposer had ballsed this up.

Firstly a summing-up for those unfamiliar with the game. JA:BIA is a strategy game where you control a small group of mercenaries and set them out against the forces of Queen Deidranna, the ruthless dictator of the small country of Arulco. Since just a few well-placed bullets will end your guys you have to think tactically to outwit enemies, luring soldiers away from groups and slowly picking them off one by one.


Over the course of the game you have to slowly liberate Arulco one area at a time, take on missions given to you by the residents for cash rewards, recruit new mercenaries to your cause (you’ll probably only start with two) and finally take on Deidranna herself in a giant armoured robot-suit. Okay, maybe not that last one as this is a “realistic” game. There’s a lot of content here and while there’s a lot of saving/reloading action it remains addictive until the end.

The much-publicised shift that Back In Action brings to the series is that the game is no longer turn-based, it’s real-time. This decision has had fans up in arms, worried that this will completely change the game. While many will still complain, having played it I honestly don’t think the shift is that big a deal. I covered it a lot in the preview but I want to reassure players again that this isn’t a massive genre upheaval like the remakes of XCOM or Syndicate. Play JA:BIA like Command & Conquer and you probably won’t take out a single enemy. Moving your mercs should be the main focus of real-time, but for combat you should be automatically pausing the game and going into the Command Mode.

Command Mode is the replacement for the turn-based “do whatever mad stuff you like with no time limit” scenario of the original games. With a simple tap of the Spacebar you can plan every detail of an elaborate strategy against your enemies, before tapping again and see it enacted. Synchronising your mercs, getting them into the exact position and stance, which part of the body to aim at (helpfully given a worded rating of the likelihood to hit), even how many shots to fire. It works beautifully, although I still don’t like that there’s no “keep shooting until they’re a bloody mess on the wall” option. A lot of people would disagree with me, but hey, options for everyone would be nice.

Speaking of options, that brings me on to a big complaint. Since the first previews fans have been requesting that some sort of Fog Of War be added to the game. At the moment the player can instantly see when starting where every enemy is on the map, even if they’re in a building. While I personally don’t mind this (the game’s hard enough as it is) it does remove a lot of the tension and means that the player doesn’t have to be anywhere near as careful.


I can see why BitComposer chose to do this, mainly to up the game’s pace and bring new players in, but why couldn’t there be an option for a simple Fog Of War for Jagged Alliance fans and players that prefer a slower-paced game? Or the option to not be able to see every enemy at once until one of your men sees them? Surely pleasing the fans and catering to an ever wider range of gamers makes good business sense? It must be a simple bit of programming after all, they’ve already coded in line-of-sight and mercs reacting to an enemy’s presence so just have them pop into existence when that happens.

While this criticism hasn’t be addressed, I’m relieved to report that the AI has been improved. In the preview code both allies and enemies would frequently shoot at walls, run in circles, get stuck in doors and have supernaturally good eyesight and hearing. All that’s gone. Enemies will wait you out, investigate, change to a more defensible position, call for assistance, take cover, and generally be pains in the arse to take out.

Even more importantly though, they’re fallible. They won’t know where you are all the time, sometimes they’ll fall for your traps (and sometimes they won’t), and they’ll allow themselves to get distracted. I had one of my guys run past a window noisily to keep the attention of two soldiers in a room while my other merc snuck in quietly behind them, gunning both down without either losing health. My personal favourite moment, that.

Unfortunately for Back In Action, while the AI has been improved it’s still not perfect. BitComposer have stopped short of making the soldiers believable, with all the actions feeling mechanical and consequently you’re always reminded that it’s a game. “Immersion-breaking” is the term. Enemies will gladly sit in the same spot forever. They’ll always be able to see you a fraction more than your guys can see them, and will always be more accurate. They’ll never converse with other soldiers, go for a fag or a comfort break, be caught with anything but a gun in their hand pointed in your direction… they just don’t feel like real people, and consequently are less fun to kill (and yes I realise I sound like a psychopath, but trust me on this).

As for your own guys, I am personally uncomfortable with having to micro-manage every single thing they do. I won’t knock the score down for it as I know a great deal of players won’t feel the same way as me, but I want to call attention to it for those that might. While I love the vocal personalities that each mercenary has (with the weird German Grunty being my favourite) none of their personalities come out during play. Do I really need to change Grunty to a ‘Run’ stance on the sidebar when I’ve ordered him to retreat from four enemies with AK-47s who have already nearly killed him? And as mentioned above, why do I have to order every single bullet they fire in Command Mode, and if not enough they’ll happily stare at the soldier they were shooting at until he kills them? These things may not be a problem for some, but having your mercs dance around a ladder, a doorway or just getting stuck passing each other is when keyboards start flying into monitors.


The underlying fact though is that Jagged Alliance: Back In Action is a hugely addictive and time-gobbling strategy game, if not currently a completely polished one. When things go right the adrenaline rush is incredible, but when things go wrong several times in a row you’ll want to rage-uninstall immediately. Constant checkpoint reloading and team micro-management is what Back In Action’s all about, and some strategy fans won’t get on with that. Conversely, Jagged Alliance fans will hate the move to real-time (despite the friendly Command Mode) and more especially the lack of tension and slow pace that characterized previous games. I also can’t imagine anyone being satisfied with constantly taking down enemies so devoid of personality or believability.

A score was really hard to come up with since it wavered back and forth for me on many occasions, and will undoubtedly do the same for others. Once I got into a mission I found it hard to stop until all my plans worked out, and even defeat often had me immediately coming back to try again. That’s the mark of an addictive, fun game, which Jagged Alliance: Back In Action definitely is, but it just doesn’t do quite enough to earn the really high marks. Nevertheless, if you’re after a tough strategy game that has team micro-management but is still quite accessible give it a try. Will Jagged Alliance fans take to it though? Ooh, that’s the question.

You’ll undoubtedly make your own, but carefully planning an assault, enacting the plan and it being successful is a high few games truly match.

JAGGED ALLIANCE: BACK IN ACTION VERDICT

A score was really hard to come up with since it wavered back and forth for me on many occasions, and will undoubtedly do the same for others. Once I got into a mission I found it hard to stop until all my plans worked out, and even defeat often had me immediately coming back to try again. That’s the mark of an addictive, fun game, which Jagged Alliance: Back In Action definitely is, but it just doesn’t do quite enough to earn the really high marks. Nevertheless, if you’re after a tough strategy game that has team micro-management but is still quite accessible give it a try. Will Jagged Alliance fans take to it though? Ooh, that’s the question.

You’ll undoubtedly make your own, but carefully planning an assault, enacting the plan and it being successful is a high few games truly match.

Jagged Alliance: Back in Action Essentials 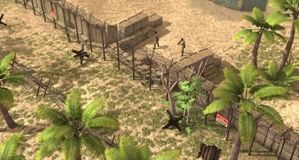