"Doing the same thing we've done 18 times before is exactly the last thing they'd expect us to do this time!" – General Melchett

King’s Bounty: The Legend was a fantastic game. Developer Katauri did a wonderful reboot/update of the series, creating a story and exploration RPG with board game-like battles that was highly addictive. That was in 2008, and since then there have been four further games in the series including an expansion pack and a FTP mobile title. All of them have been near identical, right down to loading screens, music, maps, units, and menu screen design with only a different player character and story (what there is of it) to tell them apart. The sixth game in the series, Dark Side (or The Dark Side if you go with the in-game title), is now out. It is of course a radical re-invention changing everything into a fast-paced multiplayer online FPS set in space.

I’m kidding, it’s exactly the same as The Legend. I gave Warriors of the North, the previous King’s Bounty title, a little bit of slack despite being identical to the previous games in the series, but that slack is officially gone and the noose has tightened. That Katauri not only have not even updated their graphics engine and released the same full-priced game at full price, but they also had the cheek to put it on Steam Early Access as if they needed playtesting or wanted players to see all the new changes (none) really galls me. In fact the only new thing about Warriors of the North - that your player character could directly take part in battle – has actually been removed, so this is even less of an update than the last game!


So what’s the hook? Dark Side may be exactly the same but this time it’s played from the evil side’s perspective. You can choose from three characters, representing the three upgrade paths in King’s Bounty. An Orc warrior represents Might, a Vampire lord represents Magic, and a female Demoness wearing nothing but particularly tight-fitting sexy underwear represents Spirit (yes, there will be a paragraph on sexism in gaming later in this review, I’ll warn you when we get to it). While you only play as one you meet the other two after the forces of Light in your respective lands drive your armies out. Your goal is to rally the forces of Darkness and tip the balance in your favour, thus undoing basically all your hard work in the last few games in the series. As per usual King's Bounty contains no voice acting, but in general the writing is pretty good with a lot of dialogue between characters. The story doesn't go anywhere particularly exciting but at least the witty repartee offers something new.

In case you haven't played King's Bounty and are attracted by the idea of playing a bad guy I'd better describe the gameplay. It's a game of two halves - overworld and combat. In the overworld your avatar explores various islands, talks to NPCs, upgrades their stats, buys items and troops, and finds various treasures to help in battle. If you meet an enemy (hover the mouse over one to see how stronger or weaker it is compared to your forces) and attack it the game switches to the board game-like combat mode. Your forces are on one side, the enemy's are on the opposite side. Troops are represented by single pieces that you move around, attack, and activate special powers with, and if all your troops in that unit type are killed that piece is gone from the board. Additionally there are magic spells and Rage Powers that can give you an edge in battle, and you'll have to use these well alongside good tactics if you're going to defeat stronger enemies.


It is most definitely very fun and addictive, but once again I have to reiterate that it's exactly the same as the last few games even down to the enemies you face. What's the point of playing the Dark Side if you still have to face evil enemies like zombies, vampires, ghosts etc even though they're supposed to be on your side? Nothing's changed! There's clearly an audience for this since Katauri continue making them and they haven't even bothered to include a tutorial this time, but I'm not asking Katauri to fundamentally change the gameplay or anything, just change things that can be changed! Graphically the game only appears to be in a better resolution than 2008's The Legend, the world's still cartoony with little detail. There's still no multiplayer, neither PvP or co-op (despite there being a multiplayer King's Bounty already, exclusive to iOS of all places), no voice acting, not even any damn cutscenes. I know these are enjoyable games, but it is exactly the same game you played in 2008, and again in 2009, and again in 2012.


Actually no, one thing has changed (here's the sexism talk kiddies, skip over this bit if you're not interested). King's Bounty has always skirted the edges of being flagrantly sexist, most notably with the second title Barely Armored Princess. Dark Side however crosses a line for me. I might just about have accepted the Demoness even though, well, look at her, but all the female units are dressed in equally sexy non-armour underwear and all the female non-witch characters are either promiscuous or innocent and corruptible. There's one bit where a vampire seduces a young girl while the other characters look on, all described in text of course, that goes into far too much detail and reads really, really uncomfortably like a rape scene. I can accept "sexiness" in a lot of games, hell I didn't even mention this stuff in my Leisure Suit Larry review, but King's Bounty: Dark Side goes too far - it's sexist in depiction, character, and action. This is especially bad because otherwise there is absolutely nothing here that wouldn't appeal to everyone equally. King's Bounty is meant to be interesting to all and yet for some reason Katauri think low-polygon models of women in thongs or non-animated pictures of girls in fetish gear are the way to go.

King’s Bounty: Dark Side is absolutely not a bad game, in fact it’s fun and very addictive. The trouble is that they’ve already released it at least three times under different subtitles and with the absolute bare minimum of tweaks. Katauri haven’t bothered to update literally anything to the point that you’ll hear the same music and sound effects, see the same loading screens, and use the same units and magic powers you did in The Legend, Armored Princess and Warriors Of The North. No voice acting, no cutscenes, no multiplayer, no new graphics engine, there’s not even a f***ing tutorial this time since they know their audience entirely consists of people who don’t play any other games. It has no respect for gamers so I’m not having any respect for it. If you still fancy more King’s Bounty after playing the last three then by all means pick up Dark Side. Everyone else: don’t play it, Legend is cheaper.

Being able to create dragons at will, I guess. 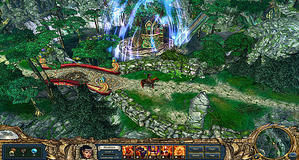 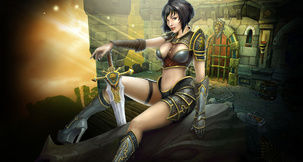