King's Bounty: Warriors of the North

An RPG-adventure set in a snowy Viking-influenced land? Chris Capel's heard that one before somewhere

In case you haven’t been counting, King’s Bounty: Warriors of the North is the fourth King’s Bounty game released in four years (the first, The Legend, was released in 2008). The fantasy RPG/adventure series is a mix of turn-based battles set on a “board” where you move pieces to face each other in a large Viking-based world.

Upon starting King’s Bounty: Warriors of the North it’s immediately obvious that Katauri have taken the idea of “changing things” and thrown it in the bin. Only the eagle-eyed will be able to tell the difference between this and the last few games, which even features the same music and loading screens as The Legend. It’s clearly designed for an audience who just want more of the same with a few minor tweaks, especially since Katauri have made absolutely no concessions to newcomers of the series.


After a few brief instructions you’re sent out into the world to cleanse your island of the undead hordes. How you do this is left entirely to your imagination, in that it’s not explained at all. The words “tutorial” and “quest marker” seem to be dirty words in the Katauri camp. Even the manual (how old-fashioned) seemed to be written by someone to whom the idea that some new people might want to try a King’s Bounty game borders on heresy. Happy descriptions of “New Features” and comparisons to previous games are casually thrown out, and the tight text and period-style font makes reading difficult too. And yes, I just complained about a game’s manual. How retro.

Unanswered questions keep popping up. Can I defeat an enemy that’s classified as “Slightly Stronger”? Who and where is Rorvald? How do you travel to another island? You can dig anywhere, so does that literally just mean pressing ‘D’ all over the place? What do all these numbers mean that keep popping up during battle? That snake’s only got 2 health, so why after I took 43 points off him was he not only still alive but his health had actually gone up to 21? How does the battle system work altogether in fact? If you haven’t played a King’s Bounty game before you may well give up after an hour or two.

After persevering and finally managing to work out the game’s systems you might actually find the reason the series has the audience it does: they are actually pretty fun. King’s Bounty isn’t played like a traditional RPG you see, in fact it’s probably closer to a board game. Your main character (this time round we’ve got a big Viking bloke rather than a dweeb or a Barely-Armored Princess) moves freely around the world picking up items, buying new troops or equipment, and either engaging or avoiding enemies. He might as well be rolling the dice and going up ladders. Nowhere is this board game aspect more obvious than the battle mode however.

The battles in King’s Bounty are really the entire game, certainly the main area of challenge. The game’s a little classic Final Fantasy-like in that you’re free to wander around a world (viewed from an overhead perspective), but if you choose to take on an enemy it switches to a turn-based battle mode. Unlike Final Fantasy though they’re almost Chess-like. You’re presented with a hex-tiled board, with your pieces on one end and the enemy forces on the other. Each “piece” has a certain health and a number of units (even though you can only see one, hence my original confusion), and only when all units have been killed is that piece dead. You can’t choose what piece to play (it cycles) and instead have to choose an action – move, defend, attack, or one of the character’s special abilities. You can also opt to activate a number of magic powers that you’ve picked up along the way.


Tactics and strategy, knowing your enemy, when to retreat, or use a spell, there’s a lot to think about in the battle mode but it never seems complex and stays on the right side of fun at all times. If you’re going up against an enemy stronger than you though you'll want to know how to use magic properly. There are two types, both indicated by icons on the taskbar. Normal magic scrolls/spells are in the spellbook and use Mana, whereas the ‘Rage of the Valkyries’ medallion represents special attacks that are fuelled by your Rage meter (that’s increased by attacking and ticks down when you’re out of battle mode). You can only use one of each per round and they often have cooldown times, so knowing what to cast and when is vitally important.

King’s Bounty is deceptively repetitive at the start. Go somewhere, get in battle, go back to town, buy more warriors, go find another enemy, get in battle, etc. In truth this is probably the entire game and remains a little repetitive throughout, although to spice things up there are quests to complete, more of the story to uncover, items hidden all around the landscape, and the addition of both ships and a flying horse (both of which are given on only the second island). You also have to consider your Rage meter when deciding whether to go and get supplies – after a battle it’ll be high but by the time you’ve gone to town and back it’ll be empty, and the beginning of a fight is usually the best time to devastate the opposing side with a special attack.

There’s an incredible amount of gameplay here, and the many varieties of enemies (most of which can be recruited at some point), new spells and new units keep things fresh. There must surely be around 30 hours or more of game in here, and it’s insanely addictive. To ask for more is surely taking the divine piss, but I’ll do it anyway… King’s Bounty is, in many ways, a board game. What do all board games require? More than one player. Where, Katauri and 1C, is the game’s multiplayer modes? Even just the basic battle mode, not even online, would be excellent. You’ve done it on the iPad, so why isn’t there one here? How about co-op, 2v2 battles on a bigger board? That would be ace and surely easy to implement, so why isn’t there one of those either? I was so gobsmacked I had to check the manual three times to confirm multiplayer’s absence.


Then of course we get back to the matter of it looking and playing exactly like the last three King’s Bounty titles. Just reading the ‘New Features’ page in the manual basically shows a list of features that have been “revised”, i.e. plays exactly the same but are spelt slightly differently. The Valkyrie powers in Warriors of the North for example play exactly like the Dragon powers in Armored Princess. The only real improvement I could notice is that your character (and occasionally your opponent) plays an actual role during battles this time with his own set of powers. Still, at the very least the Norse myth-inspired setting is more interesting than previous games’ generic fantasy. Between this, Skyrim and The Banner Saga I think Viking fantasy is “in”.

Despite lacking multiplayer and having an insane distaste for newcomers King’s Bounty: Warriors of the North is a fun, compelling game with good value for money. On the other hand, veteran fans of the series will feel like they’re merely getting a Viking-inspired expansion pack to The Legend, and so really have to ask themselves if that’s what they want. Furthermore, new fans will feel thrown in at the deep end but if they manage to swim they’ll end up addicted – but why start with the most expensive one when The Legend is $10 on GOG?

Watching an enemy fall for the ol’ booby-trapped treasure ploy and be sent smashing into the ground by a Valkyrie. Satisfying!

Despite lacking multiplayer and having an insane distaste for newcomers King’s Bounty: Warriors of the North is a fun, compelling game with good value for money. On the other hand, veteran fans of the series will feel like they’re merely getting a Viking-inspired expansion pack to The Legend, and so really have to ask themselves if that’s what they want. Furthermore, new fans will feel thrown in at the deep end but if they manage to swim they’ll end up addicted – but why start with the most expensive one when The Legend is $10 on GOG?

Watching an enemy fall for the ol’ booby-trapped treasure ploy and be sent smashing into the ground by a Valkyrie. Satisfying! 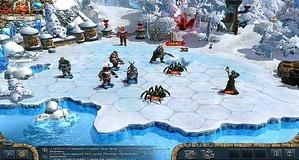