So, we have to ask ourselves, do we really need another real time strategy empire builder game of the middle ages? If that game is Knights of Honor, the answer is a resounding yes 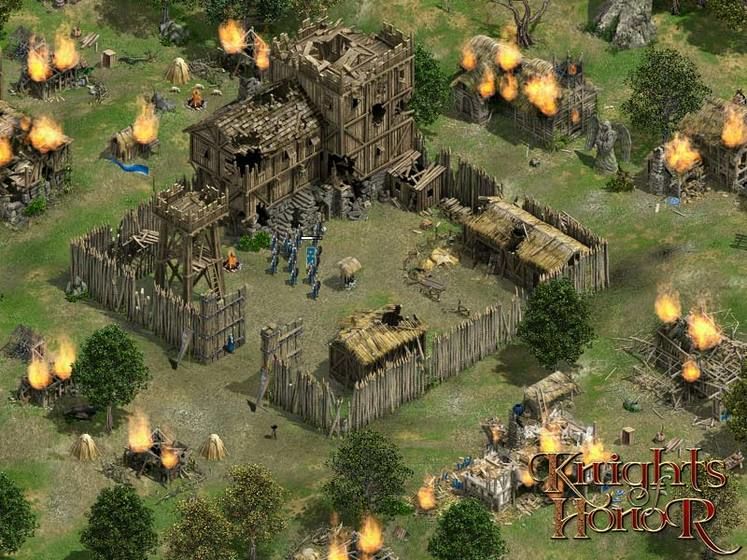 Feudal knights of old have always held the interest of gamers. For many, the idea of seiges and battles in Europe and the Middle East have been not only the stuff of legend, but also the game type of choice. There have been no shortage of games on this subject, from the superb Age of Kings through Crusader Kings, as well as the very popular Medieval Total war, PC games of the middle ages have been quite common. So, we have to ask ourselves, do we really need another real time strategy empire builder game of the middle ages? If that game is Knights of Honor, the answer is a resounding yes.

Knights of Honor is not quite like any other game on this topic, it gathers elements from many popular games, as well as concepts that are distinctly unique to itself. In the game, players can select to be the lord and master of any of dozens of Kingdoms of the middle ages, and in three time periods, the early, mid, and late middle ages. Players must strive to be the supreme leader of Europe, using combat, diplomacy, and their own wits to take over the kingdoms of the middle ages. But combat isn't the only tool available to your King, you can also win by achieving the ten kingdom advantages, which happen when you have the right combination of trade goods. 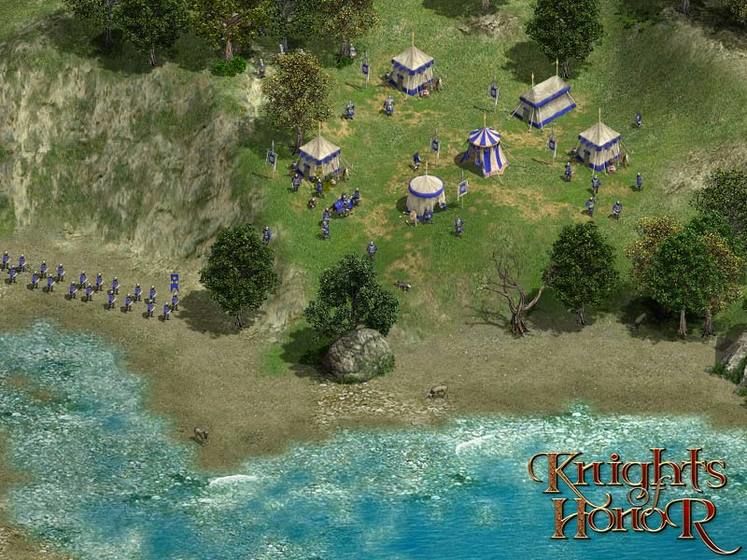 This game has an amazing level of detail and complexity, yet it plays quite simply once you understand what to do. You control your Kingdom from a city in each province on the map, and there aern't so many cities as to bury you in minutia. For example, the British isles have only 8 cities, which is certainly manageable. Play centers around your knights, of which you can have a maximum of ten at any one time. These knights, called marshals once you promote them, can be in several classes, and cannot change classes. They can be war leaders, merchants, clerics, builders, or spies. Each has uses in the game, because early on your economy need the trade gold a marshal can bring. War leaders can earn experience in battle, and you can select from a sub-menu of traits for them to gain, and they can each have 6 traits, at three levels each. Combat units can be assigned to a war leader, up to nine units, as well as four seige engines. I will discuss the unit types and seige engines a little later.

The game has a complete and fully detailed tutorial, that includes a verbal track and detailed instructions on how to play this game, and it makes leaning the game quite easy. Basically, you must earn gold, to pay for city improvements, salaries of your marshals and various other costs. You can only make so much off taxation, and there are three level of taxes, war taxes, normal, and none at all. The next area to make money are city improvements, which can earn you some money. By far, the most profitable are trade routes, which can only be activated of you have a marshal who is a trader. But trade routes don't just happen, you have to have a trade agreement with a foreign leader, and distance as well as how rich the trade partner is determines how valuable the route is. How to set the trade route is governed by the detailed diplomatic sub screens, which are very simple to use. 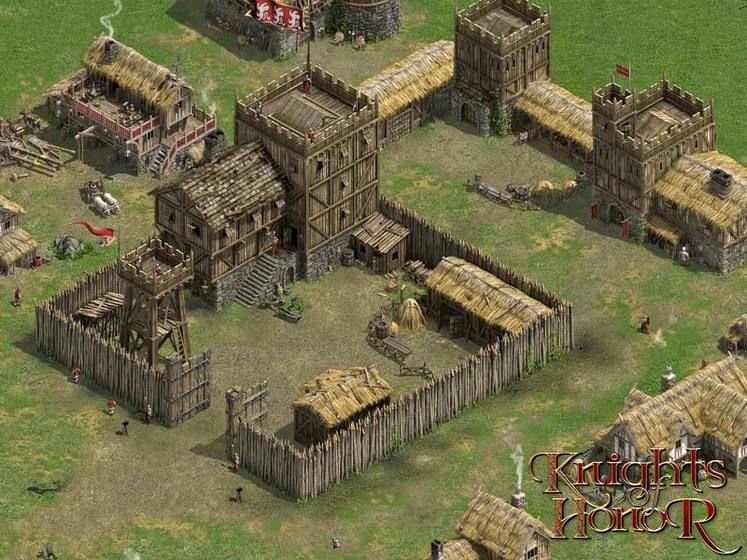 You can contact any ruler, at any time, to negotiate a deal. First, you must ask if they want trade, and the game includes political maps that show you who is friendly, and who is hostile to your kingdom. Once the deal is done, you can then click on your trader and assign him to the route. Sometimes, you can also trade for valuable goods like horses or gems instead of cash. Warfare is common in this game, people will declare war on you often in this game, and you can convince others to attack, as well as make peace before there is any combat, all through the diplomatic screens. You can also arrange dynastic marriages, which will make rulers friendly, but beware, if your king dies, they may demand part of his kingdom as an inheritance!

The city screens are straight forward, you have a finite number of slots, and choices of what you can build. Some buildings give trade goods, others improve trade, and still others allow the construction of combat units. There are also defensive city improvements, and you can remove anything you build, if you decide you want something else, or made a mistake in construction. The level of detail shines here, many types of medieval buildings can be chosen, and as your cities grow, castles add visual improvements as they are built, so you can watch your small stronghold evolve into a mighty castle. 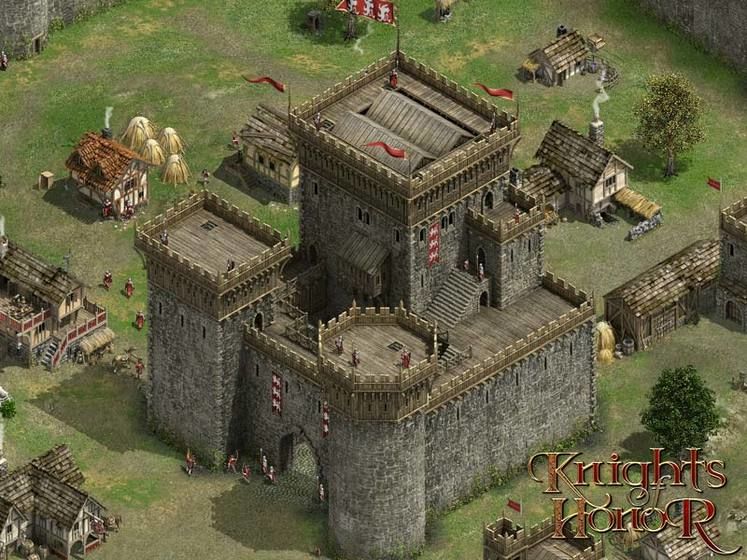 Combat is handled two ways in the game, you can let the AI handle it, and it will only show you a colored bar, which will tell you how the battle is going, or you can command directly. When done directly, the game looks and plays like a cross between Ceasar III and Age of Empires. Your forces have a large number of formations, and moral and missile units are accounted for. As for unit types, there are quite a few, many based on regions, and all historical. You can have feudal knights, men at arms, Boyers, Teutonic nights, Saracens, and dozens more at any given time. One of the better parts of this game is mercenaries. These are little camps that appear near your cities, and you can march a marshal to one, and hire exotic units on the spot, without having to set up the correct buildings and improvements in a town. All units suffer damage in battle, and they can be brought back up to strength in friendly towns, but it costs some gold. The combat system in the game is a little tricky, and quite unforgiving. Its better to let the AI handle the early battles, until you have powerful units. Also, if you are losing, its better to retreat, once you hit the red, you are usually dead.

One of the more amusing aspects of the game is the peasant revolts. If unhappy, these fellows will roam the countryside, torching villages and monasteries till you kill them. Also, patriotic locals appear from time to time, trying to expel you if you took over their homeland. As would be expected in a game about the middle ages, religion plays a big part. The religions are Catholic, Orthodox, Muslim and Pagen. This can be changed only by a cleric, who can convert a region to his religion, but its expensive, and he may be killed by angry locals. . Also, if you have a cleric, and the pope dies, he can become pope, and then you can excommunicate other rulers! This helps, because if you brake treaties with Christian states, you make be kicked out of the church yourself, and your marshals may desert or revolt. Sometimes they just run off any way. 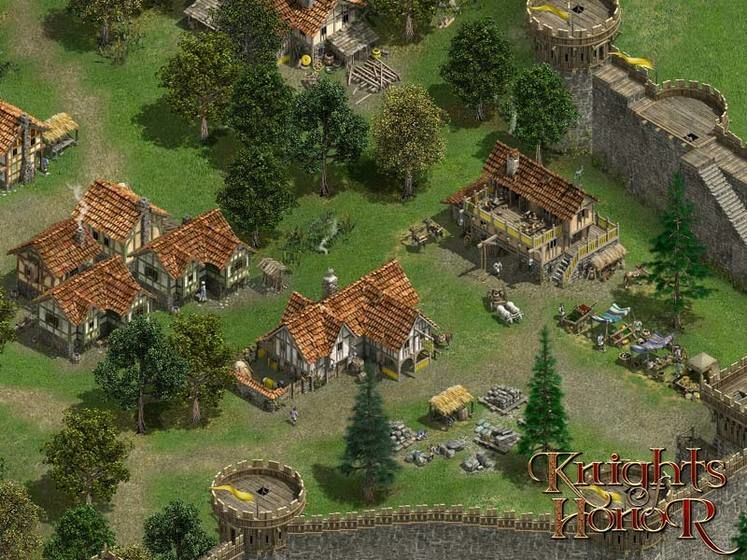 The game is quite beautiful in normal view mode, you can see rolling country side, hills, mountains and deserts. Sea travel is handled simply, just walk to a sea side village and you board ships, that easy. The cities and villages, are quite detailed on the strategic maps, as well as on the tactical maps, and combat is quite lively, archers launch waves of arrows, and animated soldiers move quite nicely, but are quite small. The game has political maps, that are color coded sub screens, and these are quite functional once you understand what they are trying to convey.

The sound quality of this game is outstanding, the voice over work is fantastic, your advisor speaks clearly, and marshals have different voices, giving them a human touch. The musical score is also quite excellent, it gives you the feeling of being in a midieval fair, and it sets the mood quite effectively. The AI is challenging, and it will fight back, so the game is not easy, but you have to also do things, if a ruler grows to powerful, the other rulers may proclaim him the leader of Europe, and you will lose. You might try for this, but if you fail, your friends might turn on you and declare war, to punish you for your hubris! 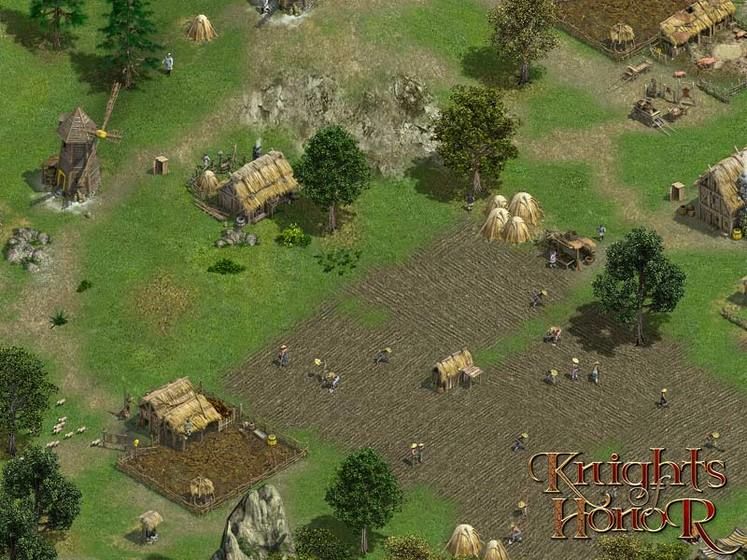 Overall, this is an excellent effort. Beautiful to look at, and easy to play, and from what I could see, bug free.The game had me coming back for more, hour after hour, and these days, that really is something, as I review a lot of games. I would say that anyone who likes a tough fight, and is interested in the middle ages, should get this game, it is well worth the price.

Click on the picture to enlarge it Overall, this is an excellent effort. Beautiful to look at, and easy to play, and from what I could see, bug free.The game had me coming back for more, hour after hour, and these days, that really is something, as I review a lot of games. I would say that anyone who likes a tough fight, and is interested in the middle ages, should get this game, it is well worth the price. 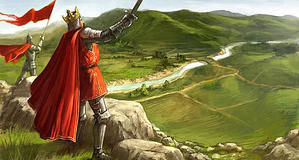