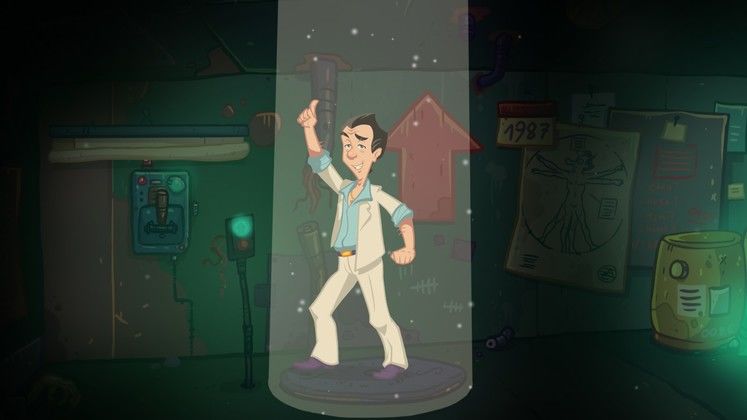 Leisure Suit Larry is the gaming series no one wanted to see return. The last installment was a faithful remake of the first game, which only served to remind us that the first game wasn’t very good - and the less said about the 3D games, the better. Why would anyone want another?

The thing is, Larry does have good adventure games to his name - Love For Sail, the last 2D adventure before the crappy 3D ones, is a wonderful point-and-click. If new developer CrazyBunch can make a good-looking 2D Larry game that leans into Love For Sail, add some modern adventure game conveniences (which the remake failed to do), and just generally have fun - then maybe it has a chance. Can Wet Dreams Don’t Dry do that? Actually… yes. It’s not bad at all. 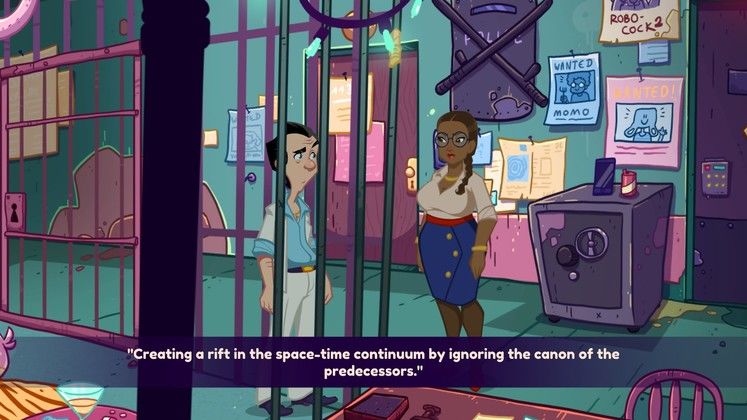 Wet Dreams Don’t Dry follows much the same path, with the interesting twist that Larry Laffer has literally been stuck in some sort of time warp for the past 30 years - now he’s got to adjust to New Lost Wages in 2018, along with smartphones, Wi-Fi, gentrification, and just generally being a man - and a series - completely out of time. 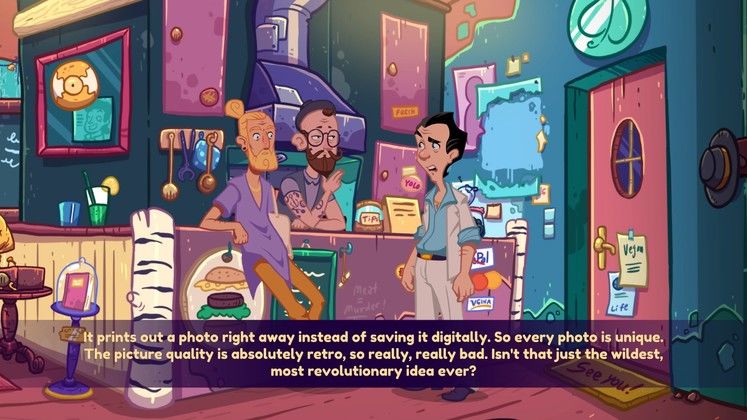 I actually like this angle. Larry was always best as a fish out of water, who you couldn’t imagine ever getting a date, so to have him now as a man who doesn’t even know what century he’s in - it’s actually quite fun. The story itself is kept quite simple, although there are twists. Larry wants to date Faith, the highest-level executive of his universe’s version of Apple - which is called Prune (you should see the logo), but to do that he has to get the obscenely high score of 90 on the “Timber” app. At the same time, Prune are up to something with the new PiPhone, and Larry will find himself linked with whatever’s going on.

All of which is just an excuse for a parade of unsubtle sex gags which barely qualify as “innuendo”. The latest Larry is never really laugh-out-loud funny in the way that a Sam & Max or Monkey Island can be, but it’s at least moderately amusing. Things never get too offensive either, as the female characters at least feel like actual characters rather than sex objects. The Deponia series is way more offensive, and that’s not meant to be (it just is). 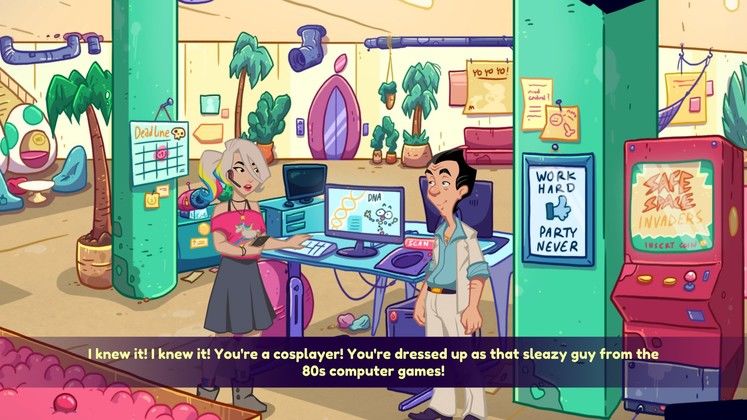 Puzzles are actually quite smart, in general. There was the odd moment of ridiculous inventory combinations, but for the most part everything made sense and the game did what I wanted to. Furthermore CrazyBunch seems to have embraced the LucasArts philosophy of adventure gaming - no money, no unwinnable situations, no travel costs, and no stupid deaths. There is death, but it’s more for amusement than any real consequence. It’s all far more enjoyable. Well, apart from the Age Test questions at the beginning, which still make no sense.

The only real problem with Wet Dreams Don’t Dry is that it feels a little cheap. There’s basically no animation in the game, other than a couple of moments. The worst part is that while location backgrounds are all packed with interesting things, you can only actually examine or interact with a few things in each location - and they’re almost always important. This consequently makes the game a lot easier than it should be, because if you’re stuck there’s literally only a couple of things you can possibly interact with. The puzzles at the end of the game are only frustrating because they’re so easy, and it clearly seems like there were supposed to be more elaborate puzzles which got cut out. 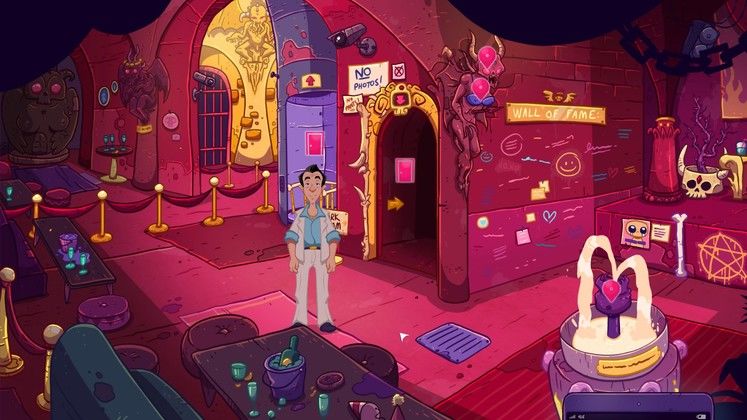 Our system is an AMD FX-8300 Six-Core Processor, 16 Gb RAM, Nvidia GTX 1050 Ti 4Gb, and Windows 10 64-Bit, and it’s overkill for a game like this. Yes, you’re not seeing things and we didn’t leave anything out - the Recommended specs are just “Windows 10”. If your PC can’t run a 2D adventure game, you might want to consider upgrading.

Considering the animation is so cheap, it’s honestly surprising how good Wet Dreams Don’t Dry actually looks. The art isn’t meant to gorgeous, but it is fun and striking. The game’s got its own cartoon style, and all the locations have a lot of neat detail. The music and voice acting isn’t too bad, either. 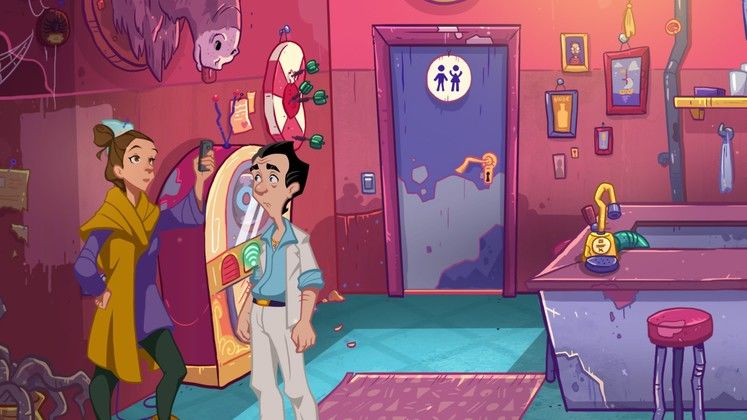 I can’t believe I’m saying this, but Leisure Suit Larry: Wet Dreams Don’t Dry is actually a game you might possibly want to play maybe. In fact, it’s not a bad adventure game at all - with quite fun puzzles, nice cartoony artwork, a decent length (not that that’s important, right ladies?), and there’s no silly mechanics (like paying for taxis and death) to get in the way. Even the jokes aren’t too offensive, with all the characters (especially the women) feeling like weird but relatable people - not just sex objects.

In fact, the only real problem with Larry is that it’s a little cheap in parts - with basic animation and very few things to interact with in any location. Unfortunately that means the puzzles can be easier than they should be. Still, even then it took me around 7-8 hours to finish, and I never once felt it wasn’t worth it. If you’re a fan of the older Leisure Suit Larry games and were hoping Wet Dreams Don’t Dry would be a return to form, you’re in for a shock - because it is. If you don’t mind a non-stop barrage of bad sex puns in your adventure game, give it a go.

The cosplay sex scene. It may not be the best part of the game, but it’s certainly memorable… 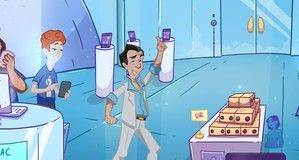