From Normandy to Singapore, this game immerses you in WW2 like never before

Something that's hard to take into account when you review a game is the concept of value. Is this game worth the money I spend? Am I getting good value for money? As a reviewer, we get copies of games for free as part of the process, but we then miss out on the transaction, the act of purchase. This mean we have to be even more aware of 'value', as our readers will actually be spending money on the games we review. As much as we've loved what we've seen of Men of War: Assault Squad so far, playing through the full game for review has made us think of these questions, and honestly, we're not entirely sure how to answer.

For the uninitiated, Men of War: Assault Squad is the second stand-alone expansion in the Men of War series, from Russian publisher 1C. The original Men of War came out in 2009, and it was a perfect fit for those who loved Company of Heroes. Coupled with the stripping of base building elements to make this a purely action orientated and realistic WW2 strategy wargame, It was one of the 'silent stunners' of the year. Since then, Publisher 1C, Lead developers DigitalMindSoft, along with BestWay (who made the engine and the original games), as well as the internal studio 1C use, have been adding to the game in a very piecemeal fashion. Red Tide, the first expansion, was a purely story-driven, single player experience, much like the upcoming Vietnam expansion. Assault Squad however, is all about multiplayer and co-op gameplay, but again as polished as it is, much like Red Tide we have to question is value for money.

Let's start off by breaking this down - what do you get in Assault Squad? Well, the main new addition to the game is the new Skirmish mode. In this, you get to play through iconic battles and locations from WW2 as any of the five available factions: The US, Germany, Soviet Russia, UK (renamed as 'The Commonwealth') and now Japan, who were first introduced in the 1.16 patch for the original game. There are fifteen missions, so three per faction (Although the US gets an additional introductory mission) and they basically involve you fighting from one end of a rectangle map to the other.

Now, these missions have some sandbox elements to them, but if we found that eventually, you felt yourselves doing the same thing. Despite being at different geographical locations around the world, each mission as three 'defence lines' you have to fight your way through. There are three control points per line, and you need to capture them to move forward. There are a number of different ways you could approach each level, each defence line etc..., but in actuality there's only one or two methods that will work with minimum losses, although it depends on the level. As you progress through the map, you get point bonuses to summon in more troops, more advanced units, and other bonuses.

In addition to the Skirmish mode, there's the enhanced multiplayer mode. Again, all five factions are available, and you have 35 maps to play with across a handful of gameplay modes. Some of the modes from the original game were cut, but most of them are there, although they may have been tweaked. You can also do co-operative skirmish matches online as well. The unit roster has been tweaked considerably, with more units, including 'special', more powerful units that have limited use. The main problem with multiplayer before were that things were a bit unbalanced, which is one of the main things DigitalMindSoft said they would work on. It is a hell of a lot better, and tweaked unit value and point costs means there's less 'tank spamming', and more emphasis on diversity in the unit roster.

And that's about it really. In a way this reminds me of the 'Semper Fi' expansion to Hearts of Iron III - a lot of the changes there were actually under the surface, so much so that we didn't even do a separate review for it because there really wasn't anything tangibly new to talk about. In an ideal world, 1C would have taken what they did in Red Tide, put it in together with the Assault Squad improvements, and labelled this Men of War 2 or something. At £24.99, whilst the work done in this expansion is very welcome, and does make the game better... it's still a lot of money for really not that much.

Everyone will have their different idea of 'value' though, so that's not really a judgement we can make for you. It's pushing the line, we'll say that, but we're still going to recommend this as something worth getting. Long-time fans will definitely welcome the improvements that have been made to the multiplayer aspect of the game, and the Skirmish mode's inevitable repetitiveness can be combated if you force yourself to try new styles of playing. Considering THQ have scrapped their Company of Heroes Online project, there really isn't anything else like this on the market right now, and if this is anything, it's definitely a quality WW2 strategy war game.

With any luck, 1C and DigitalMindSoft are going somewhere really special with this series. I can’t see this business model working in the long term, as ultimately player will want, and deserve, more fully featured products. The World War Two topic may be slightly over-done, even crowded, but quality experiences like those found in Men of War make that all irrelevant. I’ve said it once, but I’ll say it again - this is one of the most immersive and fun strategy experiences around, so dig in. 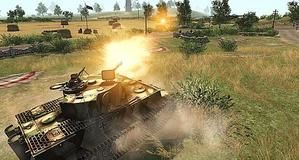