Before we start, let me state that this game is Heroes of Might and Magic VI, and not a new series of which we’ve all somehow missed the first five games. I don’t know why the title has been rearranged. It seems entirely pointless and arbitrary. Also, this game comes bundled with Ubisoft’s much maligned DRM. It can be played in an offline mode, but having the game connect to the Internet every time it starts up is nonetheless annoying and unnecessary and draconian I object to it on almost every level.

Now those points are out of the way, let’s concentrate on the game. Might and Magic: VI represents a slightly new direction for the franchise. The game has been streamlined somewhat since the fifth outing. The number of resources has been reduced from six to four – limited to wood, stone, gold and blue crystals. Additionally certain features such as the magic guild has been replaced by skill and ability levelling for heroes.


Being new to the series, I shudder to think of what playing the older games must have been like. Even with the sixth games’ new, slimmed down look, this game is absolutely huge. There are six campaigns, each consisting of four-to-five maps, with each map taking a good few hours to play through. On top of that there’s multiplayer and custom scenarios.

Yet for all its enormity and complexity, Heroes VI is a remarkably simple game to learn. This is because the complexity of the game is in the amount of stuff it includes rather than rooted in the core mechanics. At its most fundamental level, Heroes VI is no more complicated than Age of Empires. You wander around the map, collect resources, build up your base and army and fight battles.

This isn’t to say the game is like Age of Empires, such a comparison would be absurd. Heroes VI is a turn-based experience, both on the main map and during battle. Given that turn-based games are generally Not My Sort Of Thing, I was surprised by how much I enjoyed playing it.

Much of this was down to the presentation of the game. The maps are large and littered with detail. Alongside resources to be gathered and enemies to be defeated, the maps are also filled with unique items to be collected, and things like signposts, campfires and rally-points which all give little boosts to your hero’s abilities and attributes.

When battle commences, the game switches to a small tile-based map, a little like Chess except in every way imaginable. For a turn-based, tile-based game, the battles are remarkably fluid and punchy. This is in part down to the unit's fantastic animations and the sheer number of individual units that are available throughout the game.


Sadly, I can’t muster the same enthusiasm for the battles when considering them from a tactical perspective, mainly because they’re about as tactically engaging as a First World War general. It’s very much a case of big number beats smaller number. Armies are represented with individual units, with a number below the unit representing how many of that unit type you have. When you attack, the more units you have determines the amount of damage you do to an opponent, and the number of his units you kill. Only when all the opposing armies’ units are dead is the battle won.

There are a few basic tactics that are worth bearing in mind such as killing off healing units first. Also, utilising your hero’s ability wisely can speed up the resolution of a fight. Yet if the enemy’s numbers are significantly greater than your own, the best tactic is to scuttle speedily away whooping like Futurama’s Doctor Zoidberg (though I suppose the whooping is optional).

Still, they are fun, which is something that carries over to the game in its macrocosm. Also, when you look at the game’s bigger picture, more complex tactics emerge. Keeping your armies’ numbers up is a constant challenge, as even a small force can nibble away at your ranks. Luckily, you can recruit other heroes to your cause. At one point I ended up using my recruited heroes to form a constant supply-chain of units to boost my main characters’ vanguard force, enabling me to relentlessly push forward against my adversaries.

Sometimes though, that isn’t a possibility. In fact, as you go further into the game, a fair amount of time is spent waiting around to rebuild your forces so that you can advance, Fortunately, unlike previous HoMM games, it doesn’t take seventeen lifetimes for the enemy AI to complete its turn, which means that even if you have to wait an in-game week to create a new army, in reality this takes only a few minutes.

The last point of interest is the story, in that it isn’t terrible. It isn’t exactly great either, but it’s interesting enough to keep you involved. It focuses on Duke Slava, and later his five children, in their battle against a resurrected and corrupted Archangel General. The sprawling dynastic conflict has a slight whiff of A Song of Ice and Fire about it, albeit with considerably more magic and considerably less incest. The dialogue is generally stilted and dull, although characters like Kraal the Orc occasionally extract the odd chuckle.


Also, the game sports a “tears and blood” morality system, which are basically liquid good and evil. Moral decisions mostly amount to a polarised “to kill or not to kill” scenario, and aren’t a patch on The Witcher 2’s intellectually stimulating shades of grey. Depending on which route you go down does affect your characters’ abilities, and it's enough to keep the story from stumbling into tedium.

All in all, Might and Magic: Heroes VI is a triumphant return for the series, albeit one slightly spoiled by a ridiculous name change and irksome DRM. Nonetheless, the game manages to be simultaneously slick and expansive, complex yet simple to learn. As I myself discovered, if you’re yet to try the series, now is a good time to get involved.

All in all, Might and Magic: Heroes VI is a triumphant return for the series, albeit one slightly spoiled by a ridiculous name change and irksome DRM. Nonetheless, the game manages to be simultaneously slick and expansive, complex yet simple to learn. As I myself discovered, if you’re yet to try the series, now is a good time to get involved.

Finding a rare artefact that gives your hero a debilitating spell that he can utilise in battle. 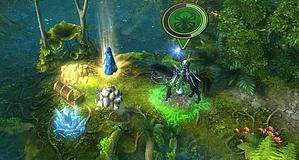