Unique and Yet Familiar 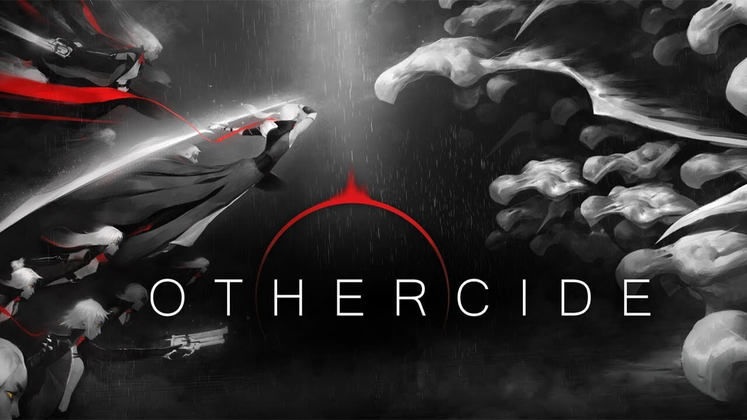 I’ve been anticipating since I learned of its development early this year. Aesthetically, it instantly gained my attention. It has a black and white color motif, with splashes of red (blood), that makes it instantly stand out. Furthermore, it promised to offer some unique twists on the tactics genre, both with its rogue-like fare and with its strange premise: command your army of “Daughters” against a terrifying group of nightmarish monsters where defeat isn’t just likely, it’s a guarantee.

As with most other rogue-like games, you’ll progress through Othercide as best as you can, but subsequent runs will be made easier with meta-progression elements, like the ability to resurrect your best Daughters, or starting your next run with higher health for each member of your small army.

It’s a unique affair, as rogue-likes are generally action adventure games, and not tactics games, with a moderate dose of RPG elements.

So does it work? 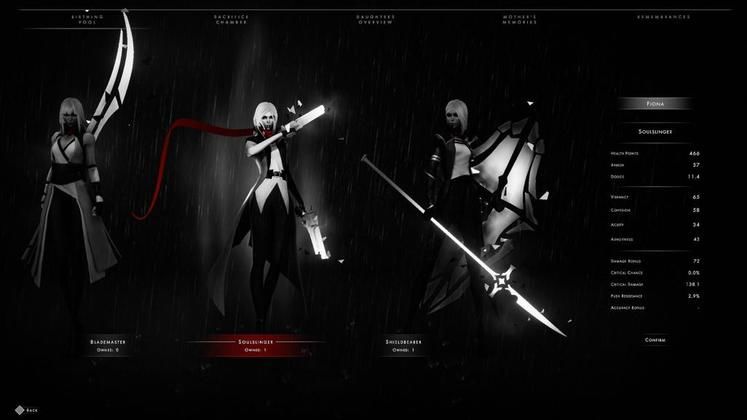 Each of your daughters fulfills a particular combat role in one of three starting classes: the Blademaster, the Shieldbearer, and the Soulslinger. The Blademaster is capable of some devastating close-range attacks, while the Shieldbearer not only hoards all the defense and hit points but also utilizes some crowd control skills. Finally, the Soulslinger deals long-range damage, but can also boost other Daughters’ abilities and initiates some powerful attack combinations.

As you progress through each Recollection (or run, in layman’s terms), you’ll only succeed by finding the synergies among the different classes and using them to your advantage. In my first push, I was able to make it all the way to Day 7 before being annihilated by the first boss. But all was not lost, as I was able to accumulate shards, which allowed me to purchase perks for the next run.

The unlockable perks, called “Remembrances”, each unlock in a variety of ways, but usually through combat and progressing through each of the Recollections. For instance, Shimmering Blood provided my Daughters with more health, while the Corroded Scissors allowed me to resurrect a fallen Daughter.

Speaking of fallen Daughters, you’ll accumulate those pretty quickly. Othercide is unforgiving and despite your Daughters being pretty capable of defeating the monstrosities that await you, numbers are absolutely on their side. The difficulty is further elevated by your inability to heal your Daughters in any traditional way. In fact, you’ll have to sacrifice other Daughters to heal their sisters and they have to be of equal or higher level in order to properly sacrifice themselves. So yeah, it’s not simple, and it makes for some very tough decisions.

The longer you keep your Daughters alive, the more skilled and powerful they’ll become, too. At various milestones, Daughters have an option to take one of two new skills. Each skill either consumes Action Points (AP) or a small percentage of their health. More often than not, the skills that require a portion of their health are very useful and may actually prevent them, or their sisters, from taking even more damage than the blood sacrifice requires.

It’s just one tough decision after another. 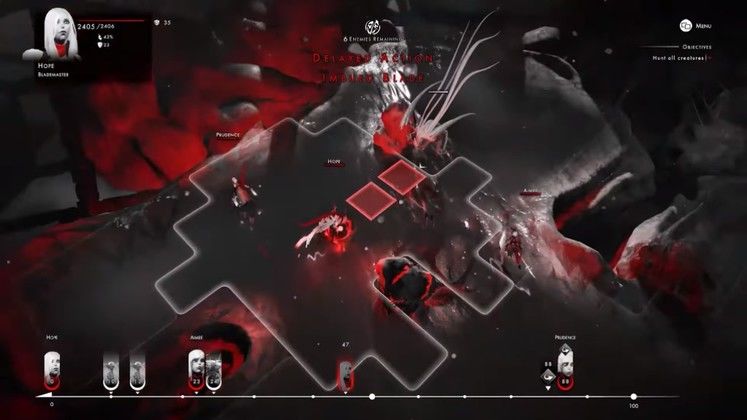 The dance is still a bit of an educated guess, as you’ll never know exactly what the enemy will do, but with the game’s “Dynamic Timeline System”, you’ll have a good idea when the enemy will move. The timeline appears at the bottom of each battle and shows you when each unit moves, but various skills and attacks can disrupt that timeline, depending on your strategy.

It’s a bit more nuanced than your normal combat system and it takes a bit longer to get used to, but once you start thinking the way that Othercide needs you to think, you’ll be able to make your enemies suffer at the hand of some brutal combination attacks.

While the visuals and presentation of Othercide are above par, the one thing that really started to rub me the wrong way was the lack of variety with the voiceover work. If I have to hear another Daughter say “They worship torture and call it science” one more time, I might just lose my mind.

See, the problem isn’t with the quality of the voiceover work, it’s the repetitiveness. All told, there might be a half-dozen lines during combat that get repeated over and over again. In a game that is repetitive by its very nature, having to listen to the same voiceover lines every. single. battle. is mind numbing. Honestly, I’d love to see more lines added, as they add an ambience to the battles that would be missing without them, but short of that, I’d rather just mute them all. 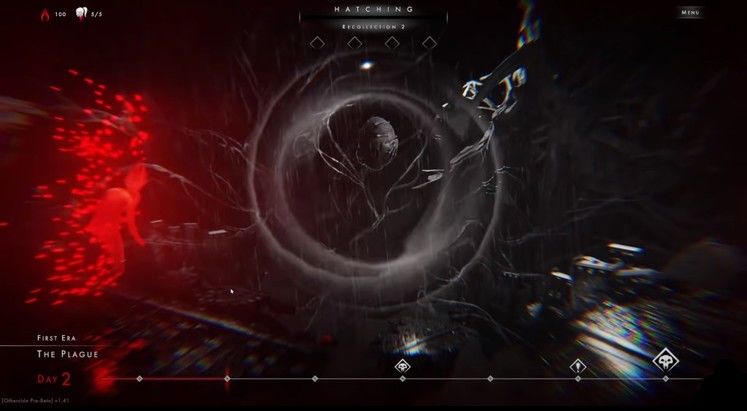 Othercide’s universe is a strange, dark place and in very much the same way Dark Souls reveals its world very, very slowly, so does Othercide. Without giving too much away, the game focuses on the Red Mother, the one who appears to be leading the Daughters to battle, as she attempts to root out the Suffering, the primary antagonist of Othercide.

The mood and pacing of the story revelations are very reminiscent of my previous experiences with the Dark Souls series and the other FromSoftware titles.

As a fan of those aforementioned FromSoftware games, I can honestly say that difficult games don’t turn me off. However, Othercide’s difficulty is beyond that of many other games that I’ve played, to the point of feeling a bit unfair. Some mission types, particularly the missions that you “just” have to survive for a period of time, feel not only extremely troublesome but also tiresome and frustrating. 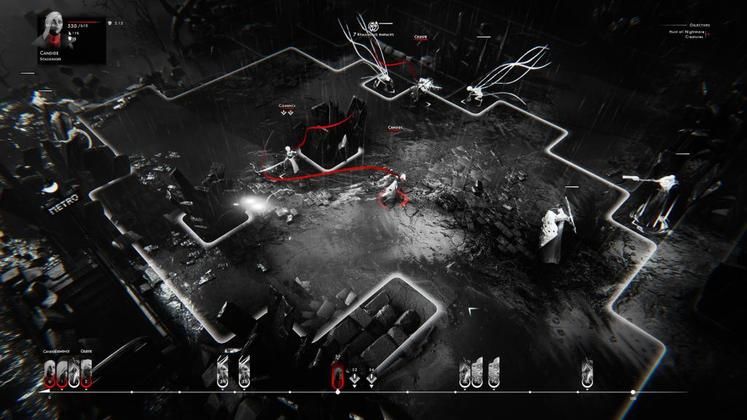 The game mechanics all combine to make each run only slightly more likely to be successful, so it takes much longer than I would have wanted to tackle the various bosses and to feel like I’m making real progress.

This type of difficulty might appeal to some players, but for me, and likely for the average player, it’s a bit of a turnoff. I genuinely felt like quitting many times, but only stuck with it for the sake of this review. Those of you expecting something more akin to some mainstream tactics games are going to be unpleasantly surprised.

Furthermore, the lack of variety in mission design or even mission maps will lead you to start feeling less than excited to keep going time and time again. After the fourth or fifth loss, I knew exactly where enemies would be on the maps that I’d already seen three or four times. A game of this nature simply needs more variety.

However, the juice is mostly worth the squeeze in Othercide and if you can stick with it long enough to develop a good sense of the mechanics and variety of ways you can use the skill combinations, you’re likely going to find some enjoyment here. But good god, does it punish you often and sometimes without warning. Not cool.

A combat system that’s deeper than it first appears is the real star here, but you’ll likely also stick around for the perverse and disturbing universe and the story that plays out within it. The voiceover work will quickly annoy you and the difficulty is unfair, but there is still a bit to enjoy here, assuming you can ignore some of Othercide’s shortcomings. I wanted to like Othercide much more than I did.

Finally taking down the game’s first boss, The Surgeon, after many, many attempts. 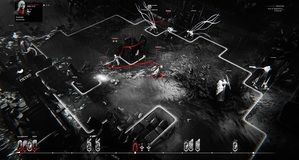