Upside down on the zip-zip-zipper

I was so happy when I found the customisable signs in Planet Coaster. Not only was I able to make a sweet rollercoaster that looked like a death trap waiting to happen, now I finally had the chance to name my burger stores anything I wanted. Just having the word ‘food’ on the front is a bit boring, isn’t it? Bearing in mind the theme of my park is death, I wanted something to reflect that in the food my guests ate. ‘Dog Food’, ah, that’s about the level of maturity I’m aiming for. Time to place a man on top of the building, along with a square beneath him that shoots out fire. I feel like this represents the food my guests are paying $15 dollars per meal for. This is Planet Coaster; a game that lets you create practically any theme park you want.

For those of you who aren’t as childish as I am, there’s a lot more to the game than just messing around in the Sandbox mode. Speaking as a relatively inexperienced theme park manager, Planet Coaster managed to teach me how to run a park without explicitly telling me how to do so. 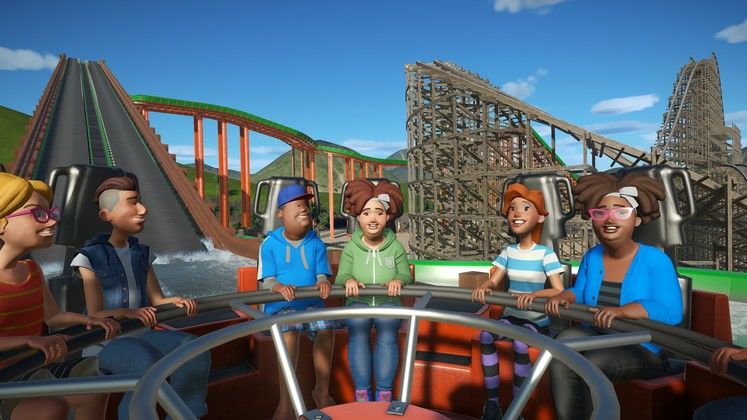 To be fair, I don't think there's a person alive who looks good at this angle

Throughout the career mode, casual players will learn several advanced micro-management tools such as the use of Work Rosters. This might not sound like such a big deal, but when a player goes from happily placing rides to happily placing rides while dealing with their staff’s work rosters then yeah, that is a bit crazy. Planet Coaster manages to make the behind the scenes park work seem enjoyable, even when you are forced to deal with people vomiting everywhere…

If you aren’t the type of player to care too much about the ins and outs of your park then that’s fine, you can be completely oblivious of that stuff if you’d like to be. Players have access to a Sandbox mode featuring five different biomes including: Tropical, Desert, Grassland, Alpine and Deciduous. Sandbox mode is just like any other sandbox mode you’ve played – you have access to unlimited money and a large amount of space to do whatever you want.

Check out new custom starting maps and amazing rides with the latest of our favorite Planet Coaster Mods! 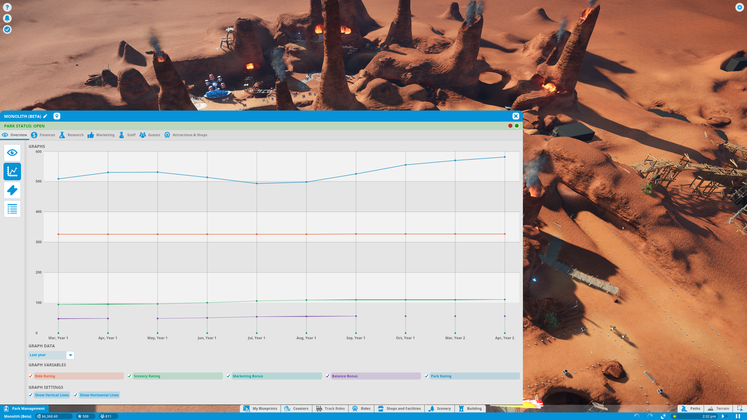 These graphs mean something to someone, I'm sure

I cannot stress enough how good Planet Coaster is if you are even the least bit creative. To be honest, I’m not really into theme parks, but Planet Coaster gives the user so many different tools to create things that it’s hard not to love it. Frontier have found the perfect combination of having a beautiful game with simple tools and extremely calming music. In a world with Donald Trump as the President of the United States of America and Theresa May’s Post-Brexit Britain, a game like Planet Coaster is exactly the type of thing you should be playing when things get stressful.

Players who don’t want to want to go through the Career mode (or for those who have finished the career mode altogether) can try the Challenge mode. Unlike the Career mode which throws you into a pre-built scenario, Challenge mode puts you into a similar space as the Sandbox mode except this time you have financial limitations. You can select a difficulty (easy, medium or hard displayed as individual stars) just in case you aren’t a Planet Coaster champion. Depending on what difficulty level you selected determines the speed and price of research, how happy guests are and how quickly rides break down. I am pretty much addicted to the Sandbox mode at this point so I haven’t played too much of the Challenge mode, but if you want something beyond the calm world that is Sandbox mode then you have that option. 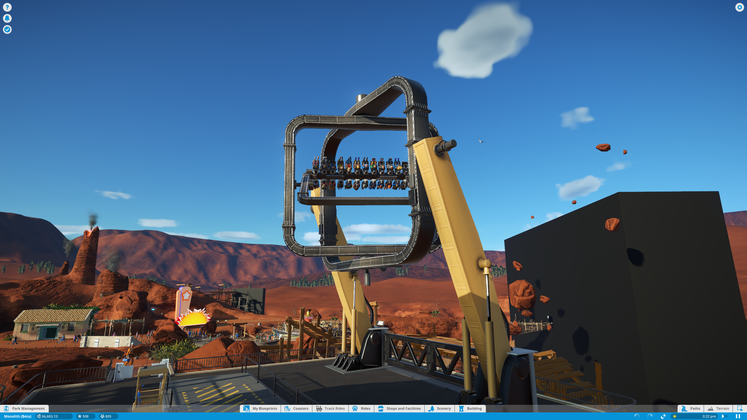 One of Planet Coaster's crazy rides

There are several parts to Planet Coaster’s Career mode, and despite people technically being able to finish off each task relatively quickly if you tried, there’s a big chance you wouldn’t rush it because it’s easy to get lost in the game. The Career mode puts you into different scenarios and gives you goals to achieve in your set location.

On the very first challenge I ended up earning my three stars after an hour, but I didn’t quit out of the scenario for over two hours because it’s so fun to just mess around with all the tools at your disposal. One great feature that I really came to appreciate is that you can load up your Career save and turn it into a Sandbox save (or a Challenge save). I am guilty of not being super creative when it comes to starting something from scratch, but this neat little feature gives people like me a nice foundation to build on. 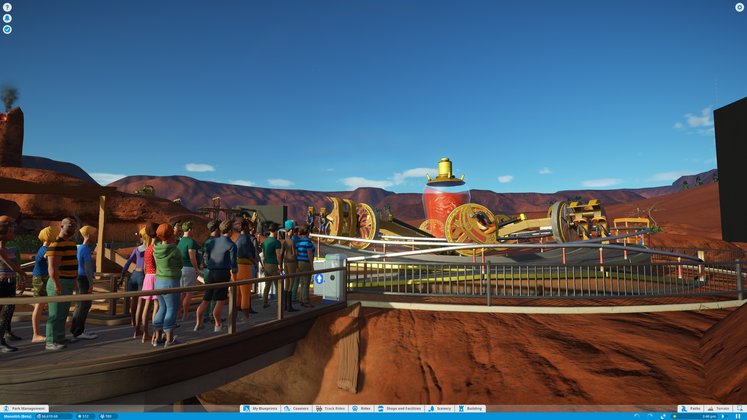 Planet Coaster tries to cater to both hardcore and casual players. Hardcore players have the option of micro-managing several aspects of their park, right down to the silly amount of statistics available regarding profit margins. Casual players have everything they could ever want right at their disposal. Want to create a rollercoaster that rides directly through your own personalised replica of Mount Rushmore? You can do that. Think of all the things you are capable of doing with the terrain tools that allow you to create lakes and caverns, or the ways you can use objects to create unique shops and buildings, and of course the rollercoasters you can create using the simple tools. The best part is that every player has access to these tools, and every creation can be shared using the Steam Workshop.

There’s a certainty that you will find on the Internet these days – someone is almost always better than you at something. Fortunately, when it comes to Planet Coaster, there are thousands of dedicated creators who have already spent hours of their time creating things for you to use in the game. The amount of talent some of these people have is unreal, I mean, there is a guy out there who has created a replica of Hogwarts. Steam Workshop contains more than ten thousand user-created objects. Remember, all of this was created before Planet Coaster launched - that number could easily be doubled in the next few months when the game gets into more people’s hands. 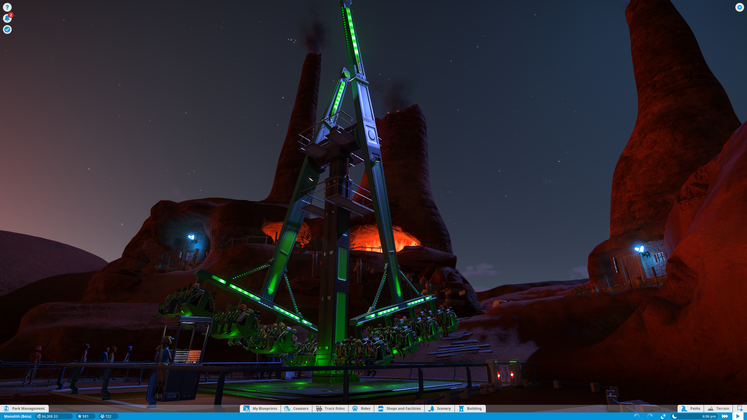 Customise the colour of your rides 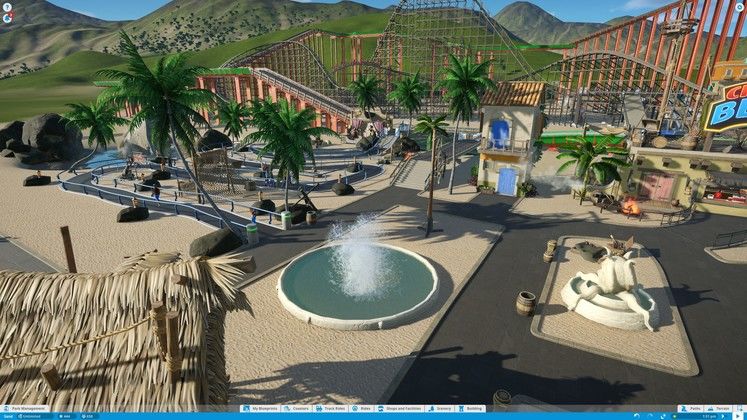 It's not quite Hogwarts, but I'm happy with it

It’s been stated before but I’ll say it again: Planet Coaster is a gorgeous game, and as we all know, good looking games usually come at a cost. Personally, I cannot describe the experience of playing the game on a low-spec machine, however I can say it runs incredibly well using a 6700k and a GTX 1080. That would usually go without saying, but when games like Dishonored 2 come out with performance issues, it’s probably best to clarify. Planet Coaster also supports high refresh rates (120/144hz) and it has true ultrawide support, so you won’t have to worry about finding any ultrawide fixes for the HUD. On a separate note, I streamed Planet Coaster to my laptop with a touch screen display, and while not officially supported, the touch screen was actually quite nice to use. Those of you with a fancy gaming laptop (with a touch screen panel) will be pleasantly surprised to find how natural it is to use – definitely give it a go if you have the chance.

As someone who started playing Planet Coaster without any real expectations, I can safely say that the game is well worth your time if you are the least bit interested in a game reminiscent of the classic Rollercoaster Tycoon games. Frontier have created one of the best games in the genre, and judging by their support of Elite Dangerous post-launch, it seems that there’s still more to come from the developers.