It's never been better to be Evolved

The city that never sleeps is once again wracked with infection, monsters and martial law. Except this time it’s not only struggling to cope with a fresh outbreak of the violently ravenous Blacklight strain, or the jackboots of amoral military grunts, but by also being physically torn in three.

In the original Prototype we played as Alex Mercer, who suffered a bout of amnesia after being turned into a virtually unstoppable killing machine that could manipulate the very physical matter of his body. This time we’re in the boots of Sergeant James Heller after he’s returned from his tour abroad and tried to get back to his family. Sadly the reunion isn’t what he pictured and before long he’s off on a crusade to kill Mercer, whom he blames for his family’s gruesome death.


I won’t be going deep into any of the story because there are some nice twists to experience first-hand, but obviously Heller becomes infected by Blacklight himself and turned into an Evolved, which is someone who gets their genetics rewritten and becomes a superior genetic life form. Mercer uses Heller’s rage and redirects it against Blackwatch who returns to lock down New York which has become known as New York Zero. The city is a shell of its former self as it’s been broken up with two chunks now large islands designated Yellow and Green zones. The rest of Manhattan has been declared the Red zone because it’s the worst hit by the new infection.

As we’re not playing as Mercer but as the newly evolved Heller, Radical is able to propel our level of power back to zero. Despite this Heller is no push over even this early in the game and it’s soon apparent that he’s a much more dangerous beast seething with rage, and armed with a mouth and vocabulary well acquainted with sass. Already the storytelling is better thanks to the quite artistic black and white cut scenes when there are important things going on. The only ray of colour that makes it through is red; blood red. It helps ground what’s going on and I’m glad to be able to say there are a lot better lines being delivered by the cast than in the original, although the plot can be a little heavy at times to keep up with given how many people are involved.

Outside of these non-interactive moments Heller is free to tear up the place and scale buildings like they weren’t even there. Of course in the beginning you’re at your lowest point in terms of power against the environment and foes; either Blackwatch or infected. Killing things nets DNA which slowly builds up the experience bar that will let Heller evolve to the next level. This gives us opportunity to pick an area where we can improve our potty-mouth protagonist. We can increase our health pool or improve our mobility with better sprint speed and greater height in jumps. Some are locked until certain points in the story. One I’m really grateful for is regeneration that can top your health back up to full when out of combat, and eventually even during, albeit incredibly slowly.

It was a little thing that irked me from the original that you didn’t heal naturally given how powerful we were meant to be, but Radical corrects that with Heller. Getting to eventually jump 300 percent higher is pretty damn awesome as you can clear a great many buildings with ease, and when combining that with leaps off a tall building, and then gliding, you can clear huge swathes of the city with little trouble. Of course you’re going to be distracted by all those tender looking soldiers, infected and maybe even civvies that are milling about below.

Using Heller’s arsenal of powers is easy and can be reassigned either to X or Y on-the-go by holding the LB button and highlighting one of them. You can only have two powers actively assigned to the controller, discounting the all new block which is tied to RB. Using the shield block ability is going to be your new best friend and vital to surviving encounters later. If timed correctly Heller will shield bash them which can stun a foe letting you dish out damage or even perform a devastating disabling move like cutting one of their arms off or body slamming them to the ground. Another new power debuting in Prototype 2 are Tendrils which add a whole new level of fun. You can literally string your foes’ guts up around you and even use a Blackhole move which causes the target to fire out and grab things around them before sucking them in at dangerous speeds to the centre. Boom. Squish. Giggle.

Just like in the original the powers themselves are probably the real stars of the game. The pounding fists return although we lose the Hammer throw which gave me a frownie face, but at least we can hurl ourselves down, strike the ground and punch spikes up in a deadly AOE attack. The blade arm also returns with a nice spinning attack slicing through pretty much anything and then there are the tried and true Claws that gouge and cut to ribbons. We also get our whip arm making those damn helicopters regret answering the strike team call, plus whipping it around and cutting everything down in seconds never gets old.


Every power comes with an easy combo move and also an aerial attack. These aren’t complicated and chances are you’ll be keeping yourself to your favourites powers for most of the game. Combat itself is vastly improved over the original thanks not only to the refinement of powers and the blessing of a decent ability to shield Heller from harm, but also being able to dodge with ease.

The only trouble is the lock on for enemies can sometime prove more a hindrance than anything else, and when fights get to large numbers all hell breaks loose and it can be difficult to feel in control of the flow. Getting clawed by one enemy and failing to recover in time could led to another two getting the jump on you or a large pounding from a bigger enemy. This still seems to be an area that needs something to make it empowering to the player and not just mash buttons – which was the original’s problem – but again, thank goodness we have shield.

Devastators come in two flavours this time and serve as our ‘super weapon’ move that can turn the tide of battle against a flood of ordinary foes and even harder to take down targets. The original got a little carried away with these giving us devastator moves that didn’t really get used all that much. It also proved difficult to execute some of them. Radical just give us two this time but they’re totally unique and awesome in their own way. The first is the default ‘f#ck everything’ move that literally tears at the environment around you and ripping foes into little chunks. The second however calls in your own pack of Brawlers who’ll obey Heller and follow him around until they die or get dismissed. You can order them to focus attention on a particular target freeing us to kill other things. It’s a great and often humorous power to abuse once you fill up your Mass power bar.

To beef up our abilities and powers even more are the collectibles strewn through NYZ, which aren’t anywhere near as taxing to your sanity as they were last time, if you’ve gone through the nightmare of collecting those damn landmark orbs. In fact Radical are super kind to those who just can’t help themselves but to go hunting for packages or whatever form they take. Simply going to the map screen and selecting collectibles lets you see what areas within a zone have something left to be collected and they even give off small pulses as to where they’ll roughly be located.

Snatching up all those collectibles will unlock mutations which empower Heller even more. These can grant some darn good advantages and come in a variety of flavours like offensive, defensive, locomotion and predator. How about being bulletproof so those silly assault rifles aren’t chipping away at your health anymore? They’re more than just worthwhile to collect; they’re about survival. Completing Blacknet operation assignments also grant you these Mutations, and offer some pretty good side missions as it uses Heller’s organic sonar-powered Hunt ability which fires out a pulse then returns to the player letting us know which direction our prey is.

It’s not all about tearing the world apart though as stealth is back too with Heller dusting off his spy skills. Once unlocked we can start stalking around Blackwatch bases with ease because we can assume their personnel but we have to be careful because the others might be watching which prevents from stealthily consuming a target. If we’re of insufficient rank then the troops might get annoyed and lead to our cover being blown. It makes for some interesting moments as you try to plan when and where to strike a target without drawing attention. There’s no finger pointing this time though unlike in Alex Mercer’s day when he could accuse someone of being him and nearby troops would open fire, no questions asked; another frownie face.


The city itself is quite the character thanks to the Green, Yellow and Red zones which showcase the differing levels of human misery. The Red is overrun with the infection and Blackwatch is constantly battling monsters left and right. The Yellow is a massive refugee camp with sporadic fights breaking out, with civilians just trudging along in their depressive existence. The Green zone is the model in which Gentec spouts as progressive, and thanks to them, nothing can go wrong. It’s also the most oppressive with Blackwatch thick on every block. Air bridges provide Heller the means to cross over into other zones, which involves getting a disguise and getting flown across. It can also act as a fast travel of sorts.

Radical’s Prototype 2 improves vastly on a lot of the formula that made the first outing good; better and sexier powers, more stuff on screen to play with, addictive collectibles and fun bonus objectives, rewarding and pip-boy-esque mutations and, frankly, a better all-round character in James Heller. I can’t comment on the RADNET events that will be rolling out week after week though because no code was supplied with this review copy, and that’s a tragedy because it contains something that made the original Prototype even more fun, but even without them Prototype 2 is clearly evolved in wickedly delicious ways.

It’s a tussle between painting the streets with tendrils and watching tanks get smooshed by crap flying everywhere, and unleashing my pack of brawlers on a Blacklight base. Although, come to think of it, ground smashing spikes off a skyscraper...

Radical’s Prototype 2 improves vastly on a lot of the formula that made the first outing good; better and sexier powers, more stuff on screen to play with, addictive collectibles and fun bonus objectives, rewarding and pip-boy-esque mutations and, frankly, a better all-round character in James Heller. I can’t comment on the RADNET events that will be rolling out week after week though because no code was supplied with this review copy, and that’s a tragedy because it contains something that made the original Prototype even more fun, but even without them Prototype 2 is clearly evolved in wickedly delicious ways.

It’s a tussle between painting the streets with tendrils and watching tanks get smooshed by crap flying everywhere, and unleashing my pack of brawlers on a Blacklight base. Although, come to think of it, ground smashing spikes off a skyscraper…Platform Played: Xbox 360. 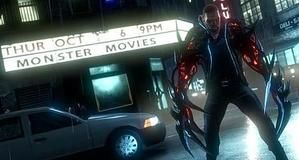