An old-school adventure with an equally archaic approach to female characters. It's time to grow up

Infamous Quests – the brains behind Quest for Infamy – set out on their journey with a noble goal: to craft a title informed by their favourite experiences of yesteryear, a spiritual successor to the old school adventure games of the late 80s/90s. While they’ve achieved their objective in many respects, the puerile undertones – particularly with regards to Infamy’s portrayal of women – detract heavily from their overall vision.

Quest for Infamy sticks resolutely to a blueprint established by Sierra’s classic Quest for Glory series which saw release during the home console period of gaming. As such, you’re presented with an authentic experience but one that bears all the imperfections that have since been ironed out or bettered as the genre has evolved. Unless you’re a staunch adherent of this period of gaming, these shortcomings are likely to invite some frustration along the way.


Infamy spins the yarn of Mister Roehm, a raffish, hirsute man with a penchant for semi-humourous wisecracks. Running away from a disreputable past, Roehm chances upon the town of Volksville – the base of operations throughout your adventure. It’s very much a picaresque narrative, reversing the polarity of your typical hero by straying away from the traditional paragon of virtue archetype.

While Roehm might be a little rough around the edges, Infamy is a whimsical adventure, laced with Monty Python-esque humour. This comical tone is established from the prologue, where you’re caught in a coital state by your lover’s father and forced to leap out the window to evade capture. Hitching a ride on the back of a local farmer’s cart, you navigate your way to Volksville and the beginning of your quest.

Within the walls of Volksville reside a colourful cast of characters who are afflicted by some truly dreadful voices. No doubt that’s intended as part of the charm – with the dodgy approximations of particular accents reinforcing the caricatures they portray – yet their grating nature makes it difficult not to reach for the mute button.

The voice acting, however, plays second fiddle to the controls as the most irritating feature you’ll encounter early on. In the name of fidelity, Infamy adopts a tiered control system (akin to Quest for Glory’s) whereby you use the mouse scroller to swap between walk, interact, talk, observe and item functions – instead of tying these actions to a singular mouse click. It’s an utterly counter-intuitive system that makes simply talking to an NPC an arduous task.

Moving from one section of the map to the next is equally as fiddly. Dragging your protagonist to the periphery of each screen allows you to transition to the next area. Consequently, it’s quite easy to inadvertently click out of the game window and onto your computer desktop, and conversely, quite difficult to coerce Roehm into navigating the world.


This lack of care filters through into the combat, which is dictated partly by the class path (Brigand, Rogue or Sorcerer) you elect to go down – which is, in turn, determined by which mentor you decide to work under. Should you choose to befriend Kurdt – the stereotypical beefy bruiser – then your skillset will be flavoured accordingly, with an emphasis on melee attacks.

Brigand’s have five combat options at their disposal: hack, slash, stab, block and heal. With fights taking place on a 2D plane, there appears to be no discernible difference between the modes of attack, as you randomly input commands to down a motionless enemy. A three-second timer for each move tries to engender some tension but really there isn’t any. Frankly, it’s as unengaging as it gets.

As an adventure game that places a premium on its narrative, you might be able to look past Infamy’s primitive combat. What is harder to turn a blind eye to, however, is the equally primitive and archaic portrayal of women.

At some point in the story, you‘ll chance upon the white-walled city of Tyr – a fortress resembling those that Daenerys Targaryen stormed in the third season of Game of Thrones. Standing sentry outside Tyr is a legion of scantily clad females, adorned in metallic underwear. Their leader, Voleris, informs you that the city is closed, after which you’re afforded the opportunity to not-so subtly imply that you’d like disrobe the crimson-haired vixen.


Attempt to interact with Voleris after your conversation and a tragic line of text appears: “there’s nothing you would like more than to touch her”. Such wilful objectification of women is wholly unacceptable, yet unfortunately, it’s a theme that perpetuates throughout the game, with the game’s narrator espousing the role of perverted overseer.

It’s a shame that Infamy devolves into such juvenile practices as there are some nice flourishes on display – for instance, the hand-drawn aesthetic lends a quaint, homely feel to adventuring that feels refreshing in light of the grandeur that western RPGs typically strive for – yet it’s impossible to root for a game that makes such a critical misstep.

It’s a shame that Infamy devolves into such juvenile practices as there are some nice flourishes on display – for instance, the hand-drawn aesthetic lends a quaint, homely feel to adventuring that feels refreshing in light of the grandeur that western RPGs typically strive for – yet it’s impossible to root for a game that makes such a critical misstep.

The sudden realisation that the combat was as simplistic as it first appeared. 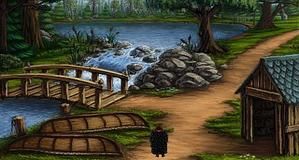