The best FPS of the year, but not the best open-world game

I’m a big fan of id Software’s games - Doom Eternal is my most wanted game, and I’m hoping for a single-player Quake game at some point - but even I can’t muster much enthusiasm for the original Rage. It was fun in parts, but drab in others, and the overall experience was deeply flawed. Rage 2, however, is the game the first Rage should’ve been, and one of the most fun games we’ve played all year.

There are a few problems, but nothing that’s going to stop us nominating Rage 2 as a game of the year candidate. It was an absolute joy to play, which only got more and more entertaining as I went along and unlocked new things. It’s certainly the best first-person shooter of the year so far. 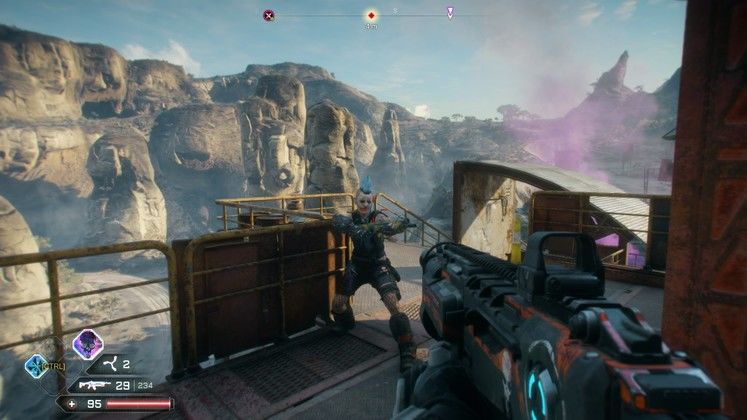 The story is set around 20-30 years after the previous Rage. After player character Raine opened up all the Arks and let the survivors loose on the technologically advanced but remorseless Authority, things settled into a relative era of peace, apart from the roaming gangs. Now an even less human Authority has returned, decimated the Ark survivors, and your character Walker is one of the last. You’ll have to get allies to strike back at the Authority, and try not to get killed by the wasteland in the process.

Like the first Rage, or Doom, or most id Software/Avalanche games, does its job, but honestly could’ve done with being a bit more expansive. The Authority never really invade after the initial Vineland attack, there’s talk about it (which would’ve been cool) but I was expecting/hoping for huge attacks which you have to foil. Instead, like Just Cause 4, the “war” is mostly confined to small skirmishes you wander by. Which is a shame. 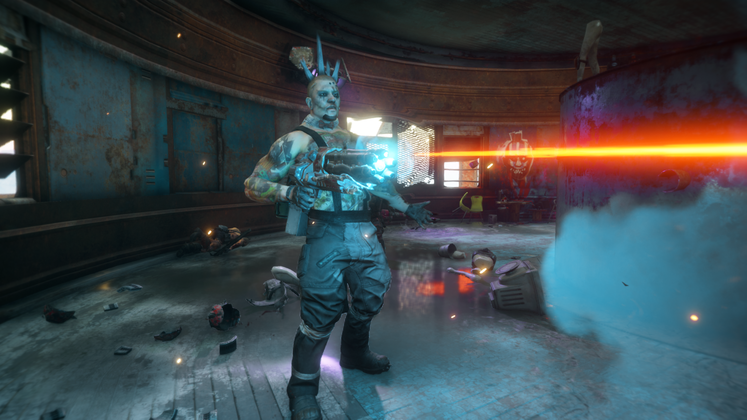 Fortunately that does not impact the sheer, incredible fun of the game. Honestly, this could be our favourite open-world shooter ever (sorry Far Cry) just because of the way it smoothly transitions from open-world to epic shootouts. You’ll be exploring, spot a place of interest, approach, and you’ll be able to start a cool encounter as good as anything in the best linear FPSs. And they only get cooler as you go along, and get access to a range of ridiculous weaponry and abilities.

Weapons include a railgun that can shred multiple enemies at once. A rocket launcher that can fire tracked mini-rockets. A chaingun that becomes more powerful as it overheats. A remote activated version of the Flare Gun from Blood (shoot it, click your fingers, enemies explode into flames). A gravity gun that slams enemies into walls. It’s hilarious even before you add the Nanotrite powers, including a mini Black Hole, a superhero ground-pound, and a Force Punch. Mess around with these powers and guns and every encounter becomes incredible amounts of fun, some of the finest firefights in any FPS. 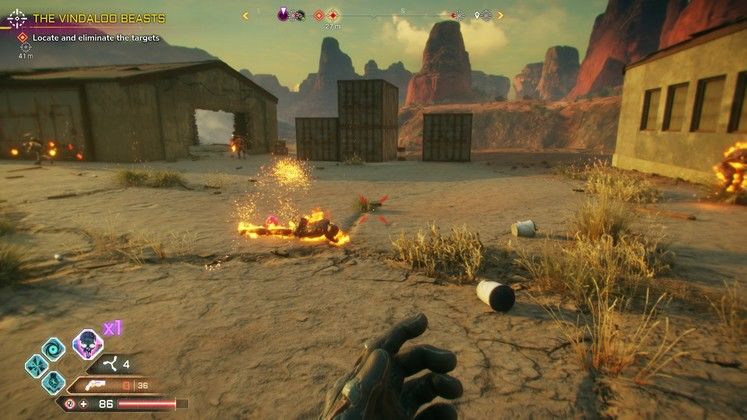 In terms of sheer moment to moment joy and FPS fun, we have not experienced a game this intense and addictive since 2016’s Doom. There are problems, but nothing else compares to the fact that every moment I played Rage 2 (over 20 hours’ worth), it was a thrill-ride that I loved. The missions are fantastic, and the open-world is covered in entertaining challenges to let you use your skills - from bandit hideouts, giant mutant bosses, to Mad Max-esque Convoy shootouts. There are issues, and things that could be better, or just more of some things, but nothing will change that Rage 2 was fantastic for every moment I played.

But there are issues. The most notable for me is that the main campaign doesn’t have enough missions in it. The ones that are there are all awesome, which is why I’m sad there aren’t more, and there aren’t any side-missions at all (apart from a pre-order one). There’s loads of side-things to do, but no special missions with cutscenes, extra chat, or secret locations. It’s a baffling disappointment, that I can only imagine was down to time issues. 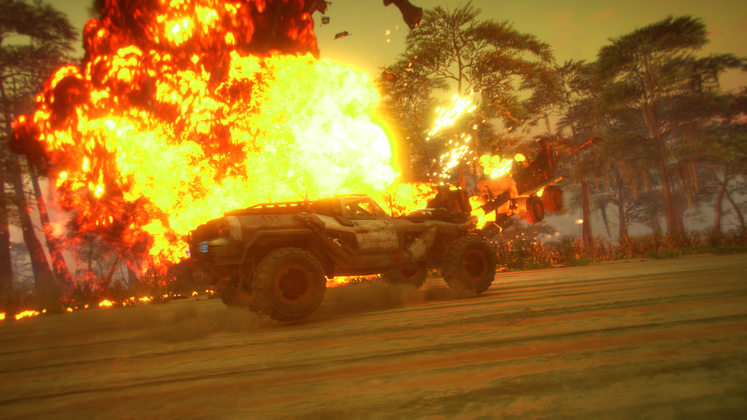 The open world itself, consequently, leaves something to be desired. While there’s loads to do in it, you never feel attached to it, and there’s rarely anything exciting to actually discover. The Authority is supposed to be waging a war, but they only pop up in small groups. Furthermore, it’s frustrating that in a game with seemingly such an emphasis on vehicle combat - there are no vehicle missions, or anything to do with the vehicles other than drive them, race them, or attack convoys. There’s also far, far too many upgrades and resources to worry about, so that every time I got one I was combing through menus trying to find something to do with it. Feltrite, Ark Cores, Projects, Weapon Mods, Vehicle Mods, Nanotrite Boosters, Cash, Components, Glands, MBTV Tokens, Mutant Brains… it’s too much!

Our system is an AMD FX-8300 Six-Core Processor, 16 Gb RAM, Nvidia GTX 1050 Ti 4Gb, and Windows 10 64-Bit, and other than a little bit of lag during more frenetic chase sequences (most annoyingly during a race) we could run Rage 2 in Ultra, for the most part. And it looks gorgeous, and colourful too. 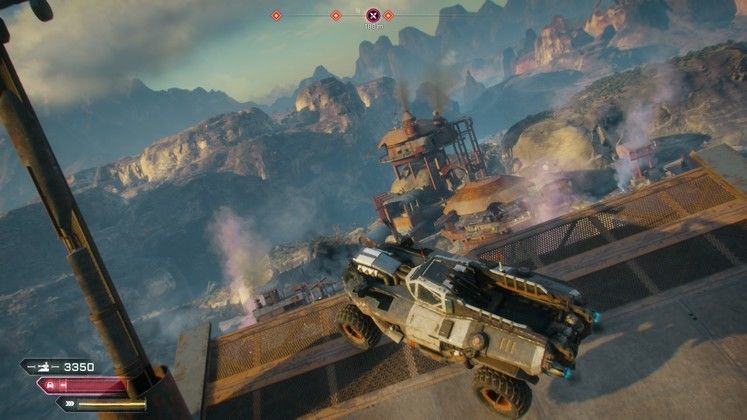 However, we do also want to note the ridiculous amount of bugs we noticed during our playthrough. Many may be fixed already (we didn’t get patch notes from the day one patch, so we don’t know) but they include - random crashes, checkpoints spawning us on the edge of a precipice, dialogue disappearing, NPCs either disappearing or duplicating, someone characters like Dr Kvasir being difficult to talk to, and one random moment where our character blurted out a story spoiler while wandering the wasteland - we wouldn’t hit that moment correctly for several hours. Hopefully these will all get fixed, though.

Rage 2 has some problems, but taken entirely as an FPS it’s probably my favourite game of the year so far. The open world needs a bit more personality, there needs to be more actual story missions, and you could drown in the amount of upgrade options there are - but none of that matters once you get into combat. I spent over 20 hours in Rage 2 and every moment was a blast, with constantly exciting shooting that rivals Doom for thrills. And I’ll be carrying on playing it after this review, too. If you’re looking for a 100-hour open-world game, look away. If you want an FPS, look no further.

Any moment where you successfully pull off some random set of power/weapon combo makes you feel like a badass. And getting the Firestorm Revolver.