Rebel Galaxy has a lot of influences. The most obvious is the inexplicably wonderful “space cowboy” subgenre of sci-fi, informed by Star Wars, Firefly, and Cowboy Bebop. The combat plays a lot like the naval combat from more recent Assassin’s Creed games. There’s an unending loop of quest rewards that let you get upgrades that let you take on more challenging quests, which feels straight out of Diablo–and that’s understandable, since the two-man development team at Double Damage Games were instrumental in the creation of both that game and Torchlight.

Before anything else, though, I have to mention the soundtrack. You can’t talk about Rebel Galaxy without talking about its soundtrack. It’s all screaming blues rock, and it does amazing things to bring the game’s outlaw sensibilities to life. There are no gameplay mechanics around it, no little rhythm minigames, but I’ve never played a game outside of Rock Band or Elite Beat Agents that had so much of its identity entwined with its soundtrack. There’s a custom soundtrack option, and that’s great and wonderful and god love the developers for including that option, but the selection of music suits the game so perfectly that I can’t imagine ever wanting to change it.

You begin the game with a tiny, rusty ship, a weird alien artefact left to you by a missing aunt, and a whole lot of open space to explore. You’ll fly from station to station to pick up missions, dig for rumors, and buy and sell commodities. Rebel Galaxy is a lot about movement. There’s movement of goods, movement from system to system, and movement through and around asteroid fields and pirate ambushes and blockades. You’re always going somewhere, through vast, empty stretches of space, wishing that the warp drive could get you there a little bit faster. 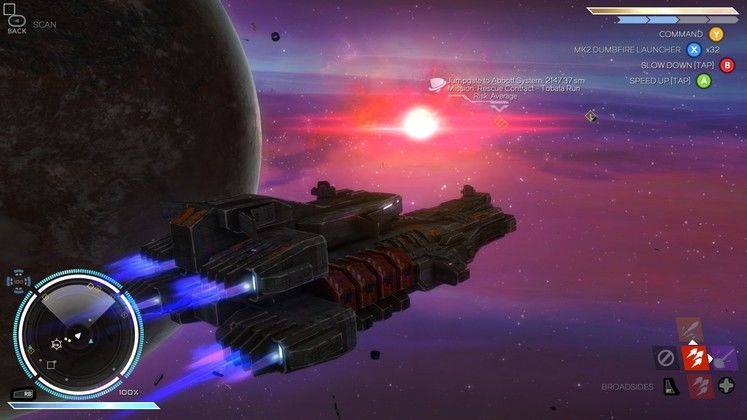 It might be weird to say a space game’s about movement when you’re confined to horizontal plane, but this is definitely not a space sim in the style of Wing Commander or Freespace. This is a space trucking game, or maybe a space cowboy game, since you spend so much time figuring out how to manage in the midst of a bunch of militaristic and economic efforts to tame a wild frontier. The core story missions primarily act as a sort of gatekeeper, gently suggesting when you’re ready to move forward and explore new stretches of space, but the game really lives by its dynamic systems, which are all about factions that may or may not be at war with each other, stations that may or may not be under blockades, and pirates that may or may not be interested in jacking your cargo.

But you only get limited information about how those factors are interacting with each other. You might see a news posting that tells you about a war raging in a distant sector, and maybe you could go look for cargo dropped by the dead warships, if the survivors aren’t still there. Or maybe this trader told you that he heard they might be selling diamonds on the cheap back on Altair IV– but then maybe they’re short on supply, and you’ll get there and only find a single item for sale, which won’t give you a wide enough margin to make the trip profitable. Or maybe the Red Devil Cartel is paying well for somebody who’ll run the Korian Outsiders out of the sector, but you happen to be the cartel’s bad side, so you’d need to get the job done without any of the people you’re working for ever knowing you were there.

It’s a lot of work, and it’s work contingent on you not having a few pieces of information that would blow the entire system wide open. If you could just know exactly what they’re paying for Greel whiskey right now two planets over, then you’d basically be printing money. It’s frustrating to be close to a big score and finding your hopes shattered because you can’t find a price better than the system’s average, but that kind of economic struggle is what the game and its space frontier aesthetic is all about. 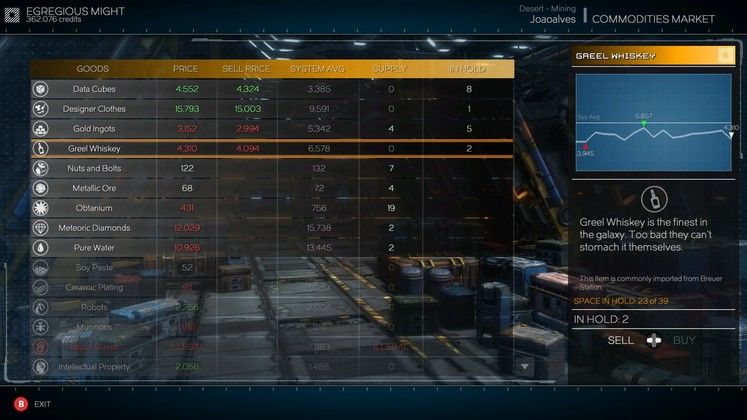 The lasers and explosions look right fancy and all, but this is the real heart of the game

The money from all this effort goes right back into your ship. You can expand your cargo hold, get faster engines, and more weapons. Eventually, you’ll start buying whole new ships, with more spaces for weapons and much tougher armor. The vessels you’ll eventually fly dwarf the starting ship–the opening of the original Star Wars pretty well indicates the differences in size–and this makes for a cool way to visually track your progress.

The weapons you purchase have vastly different effects, and figuring out how to combine these effects is the core of the combat. Your primary weapons are broadside cannons, which you’ll use on other cruisers and capital ships by cautiously maneuvering to focus fire and punch through their shields and hull plating. You’ll also have a number of turrets with more varied effects, like shieldbuster missiles, mining lasers, or flak cannons. The turrets will seek out targets on their own, and you can choose what types of enemies they focus on. Success hinges on having a varied array of weapons that can destroy fighters, drain shields, and puncture the hulls of capital ships.

But all that strategy takes place in menus while you outfit your ship, and not in combat itself, which plays out pretty much the same no matter what. Most of the time, I’d circle an enemy group to draw out their fighters and let my turrets focus on them, while I chose a vector to intercept a capital ship and start firing at range with my broadsides. Then I’d just keep firing, occasionally popping my deflector shields when missiles were about to strike, and changing my angle of attack when part of my shields went down. 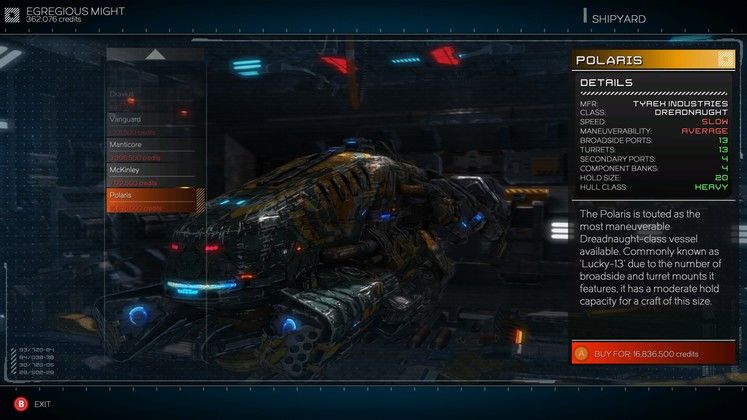 Sixteen million?! We could almost buy our own ship for that! Oh, wait...

It’s really repetitive, and the different types of enemy vessels don’t change the way you have to tackle them - it’s still small ships and big ships, and once you know how to manage your shields, there’s not much in the way of tactical decisions you need to make once you’re in a fight. Either your shields and weapons are strong enough to survive, or they’re not. Missions are all assigned a risk rating, and it tends to be pretty mechanical. “Average” means quick and easy, “High Risk” means you’ll win but it’ll take a while, and “Very High Risk” meant that there isn’t a chance. Mostly living or dying is a matter of math.

That’s why I say that Rebel Galaxy is a game about movement, because fighting is just something that happens while you’re on the way to do something else. A lot of Rebel Galaxy happens when you’re on the way to do something else, though. You need more upgrades to take the next mission to get more money to get a bigger ship so you can fit more upgrades on it so you can take more missions. Your cargo hold is perennially full of goods that you bought cheaply until you could find someplace that wanted them bad enough to pay extra. And most of your time is spent in transit, speeding from one station to another. Rebel Galaxy makes you do a lot of work for rewards that are pretty fleeting, and that pretty much nails the myth of the space cowboy. How much you enjoy the game is a matter of how much you want to live out that myth.

Rebel Galaxy has a ton of style and an incredible atmosphere that captures the weird little subgenre of space western to wonderful effect. But its repetitive combat and focus on trucking across the galaxy means that it’s not as exciting as it could be. There’s a lot to like, but you’ve got to work for it.

Busting through a militia blockade to deliver commodities for folks desperate to buy them. I may be an outlaw, but I’m a capitalist outlaw. 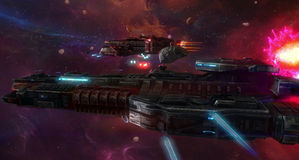