What are ya buying?

In 2011, it's difficult to contemplate just how much Resident Evil 4 did for the series. Leon's off the shoulder camera changed things significantly, introducing a dynamic viewpoint that was no longer rooted to the corner of each room. It moved away from the typical zombie scares of predecessors, introducing a slowly-progressing, 'trudge and shoot' formula that ramped up the tension considerably. It's easy to forget just how impressive Resi 4 was when it landed, especially if your memory has been tainted by the hit and miss sequel. For me, Resident Evil 4 has always been the franchise's finest moment. More importantly, it's a game that sits top of the class when reminiscing about the last generation.

Since Resi 4 landed, it's influence has been palpable. Those who played Shadows of the Damned earlier this year will have probably shouted 'IT'S LIKE RESIDENT EVIL' as soon as they started picking limbs apart. How does Capcom's original formula stand up today though? At first, it's fair to say everything here has a vintage feel. Despite being the man who is tasked with retrieving the president's missing daughter, Leon still can't walk and shoot. This has never been ideal, but the lack of movement heightens the pressure on precision shots massively. As you progress through the remote European setting, gangs of locals will quickly flock to your position. Slowing down their progress is vital, as popping them in the kneecap will send them to the floor, giving you more time to deal with the situation.


Those who didn't experience Resi 4 first time round may take a little time to adjust to the unique controls. Leon aims his gun with the right trigger and pulls his knife out with the left, with X used to unleash an attack. There's plenty of moments where you'll need to alternate between a quick shot and close-quarter combat, as the sheer number of enemies can often suffocate. Early on in the game, just after meeting the famous gruff-voiced merchant, there's the first opportunity to utilise each weapon. A couple of targets can be spotted in the distance, perfect for the range of the rifle. After taking them out, it's worth equipping the pistol as the onslaught begin. When they get in close, the shotgun is needed. Unfortunately, guns can't be swapped via the d-pad or another speedy method. Each time you want to make a change you'll have to enter the inventory menu and choose manually. This was so-so upon original release, but it feels like Capcom could have at least tried to make this more dynamic.

We've seen plenty of HD remakes this year, and not all of them have benefited to much from the visual upgrade. Resi 4 is amongst the most impressive. Each character model has been improved, often making me forget I was playing game from the last generation. Locations have also been given a slight makeover, but there are many textures still flaunt the graphical prowess of times old. In the forest especially, it's easy to tell that Capcom have focused on getting their characters up to scratch, as the floor and droves of trees often emit a feeling of greyness that's best to bypass. With that said, Resi 4 definitely benefits from the changes made.


For those looking to extend the experience beyond the original campaign, all of the additional content is also here. Both Ada's Assignment and Separate Ways make an appearance, as well as Mercenaries. It's worth noting these only become available after you've completed the single-player once, a bizarre move by the developers. It would have been great to access these from the beginning, as it's obvious Capcom want to direct attention towards the main quest.

Experiencing Resident 4 HD, everything is as it ever was. The visual upgrade is well received, and the game’s narrative is as terrifying and enticing as ever. Capcom have played this one safe, as it would have been nice to see them try and mix things up with a new inventory system. Even if it wasn’t implemented into the default set-up, the option could have provide many players with an answer to minor frustrations. Despite this, there’s plenty of hours to be had with this one. If you didn’t play this when it originally landed, consider this a must buy. Everyone else, I’m pretty sure you have your minds made up already.

The sense of terror is as unnerving as ever. 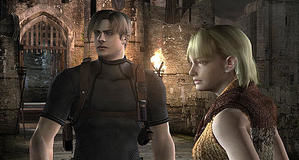