Sam and Max Save the World

Sam and Max Save the World Review

You (Still) Crack Me Up, Little Buddy

While the Telltale Games we know and loved was disbanded in 2018, their spirit still lives on (we won’t talk about who currently has their name yet). SkunkApe, a 4 member team that acquired the rights to TellTale’s Sam and Max games, has released their remastering of Sam & Max Save the World. Remasters, in turn, can be a mixed bag. A bad one can be unnecessary, adding nothing to a game that didn’t need to be updated. But a good one can elevate a title, making it shine in ways that wouldn’t be possible in an initial release. Thankfully, SkunkApe’s remaster of Sam & Max Save the world reminds us why we loved the Sam & Max games.

Here’s the gist: Sam & Max are the Freelance Police, a crime fighting duo who stop wacky crimes with their wackier antics. Season One’s overarching arc is one of conspiracy, with hypnosis threatening to take over the world. With cases involving giant mechanical presidents, toy mafias, and washed up TV stars from the 70s, it’s up to one well dressed dog and one psychokinetic rabbit-like-thing to save the world. Sam and Max has been described as gaming’s first sitcom, and the comparison is valid. While episodes can take you to places as wacky as TV studios, the internet, and the moon, many locations in the game are reused throughout the season. It adds a familiarity for each episode and can give you some general ideas to solve puzzles. 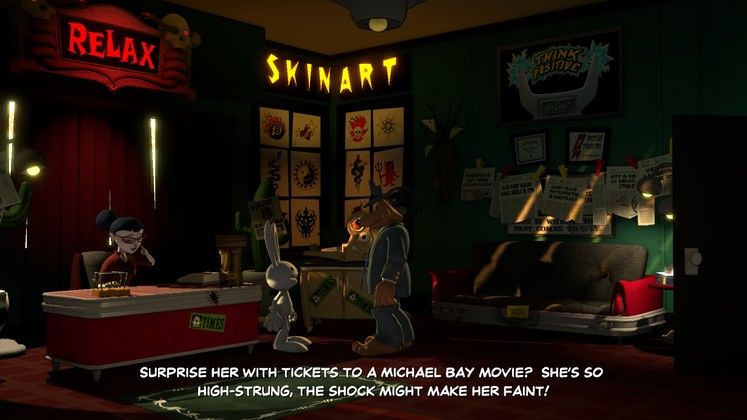 Comedy in gaming has always been hit and miss, though Sam and Max stands out as one of the funnier franchises in the industry. There’s a specific wit between them that’s absurd, making any situation they’re in almost make sense. Only in a game like Sam and Max would you have to star in a sitcom or start a war in the Dakotas. However, a lot of jokes revolve around cultural references, which aren’t for everyone. Pop culture is the name of the game, and the issues that come with it. Pop culture-based fiction can have a lesser shelf life from it, and some jokes in Sam and Max Save the World prove that. It’s been fourteen years and the cultural landscape has dramatically shifted. While a dig at Ralph Nader might be funny to me, younger gamers won’t get the joke. There are a couple of references like these, but they never veer to the point of obnoxiousness like in, say, Ready Player Two. This is helped a lot by Sam and Max as a duo. Even though they are both wholly unfit for their professions, they’re able to save the day through unconventional means and a little sociopathy. They help each episode feel fresh and make the story as fun as it is.

One of the brightest bits of Sam and Max Season One is the music. This remastering adds 5 new tracks, and it all encapsulates the franchise’s noir-tinted silliness. It’s got plenty of brass and a lot of joy. Each episode starts with the series’s new theme song, which is a lot more fast-paced than the original game’s version. Purists might not prefer the change, but the new tracks are perfectly in tune with the madcap nature of the season. The season also has something that video games have been deficient in for decades: musical numbers. Each episode has a vocal song, and they are always an episode’s highlight. More games need to sing, and Season One scratches that specific itch. 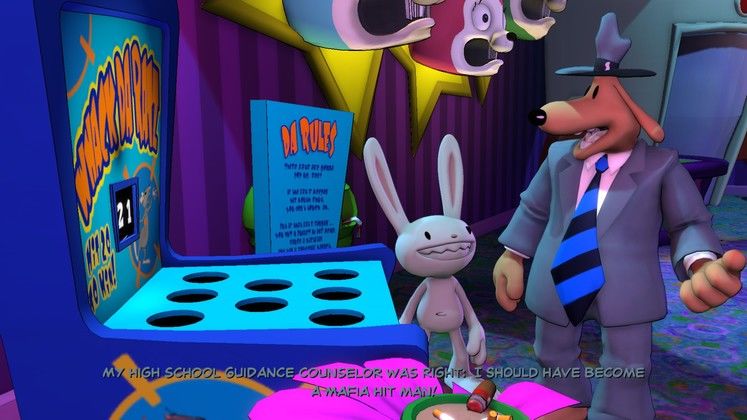 If you’re accustomed to Telltale’s games post The Walking Dead, Sam and Max: Season One might feel a bit strange. This is an adventure game through and through, with puzzles to solve and wacky things to click on. The puzzle styling of Sam and Max’s Season 1 haven’t aged as gracefully as its style and comedy. The first three episodes are straightforward with puzzles that are easier than expected, though the later two have a bit more challenge to them. Since you can’t combine items in your inventory, puzzles are at their trickiest when you’ve forgotten to click something in a level. It’s pretty clear that most of the focus was on joke telling rather than puzzle making, and that’s not itself a bad thing. It’s a funny game. Not to the point of loud, obnoxious cackling but a smile was plastered on my face during its runtime.

But the biggest changes are technical. It looks better and sounds better. Normally, this isn’t a big deal to me. But the changes made here are not just “prettier”, but they are tonally emphasized. Thanks to improvements made to game engines over the years, the game’s comic origins are a lot clearer now than in 2006. I especially took notice of the shadow tech, with some excellent use of lighting in the game. This is perfectly shown in the infamous War musical number. The lighting elevates a song that was already pretty fun to an absolute show stopper. If you want to see how much has changed in fourteen years, the Sam and Max remastering is a great example of that. 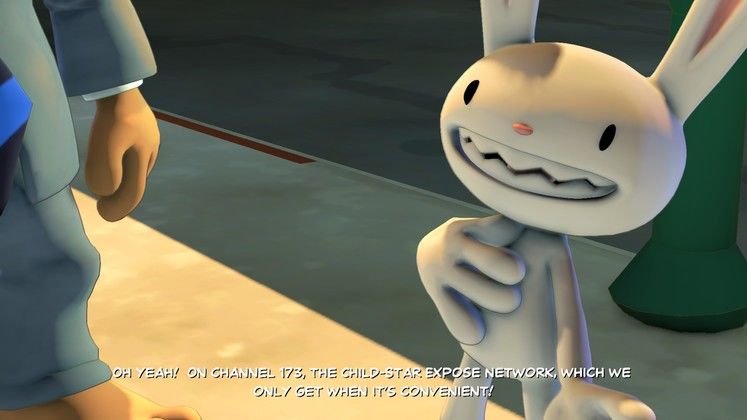 SAM AND MAX SAVE THE WORLD VERDICT

The remastering of Sam & Max Saves the World is a delightful return to the comedic antics of our crime fighting duo. Some jokes might not land and a lot of puzzles can feel too easy, but the duo’s wit has staying power. Add that with some catchy new tracks and a remastering that makes the game more stylish than less, and you have a proper return to form. If you never had a chance to play Sam and Max Save the World, this is the best way to experience one of Telltale’s first games.

The Midtown Cowboys still has one of the best framing devices for an adventure game puzzle.

Sam and Max Save the World Essentials 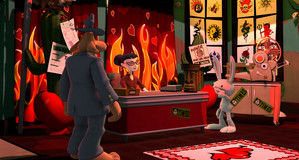