Retro gaming, eh? Re-living games of old, reminiscing about that level in that game, oh and what about that boss battle! Ah, they don't make games like they used to etc etc. We've all done it, and even those of us too young to remember the classics have still played most of them anyway. SEGA in particular has produced a plethora of classics in its time, and is now keen to remind you of that fact. Over and over and over again.

SEGA Mega Drive Classic Collection: Volume 1 is the first in a series of retro releases, and contains 10 Mega Drive / Genesis games from way back, all of which you've either heard of or already played to death. This would be a fine purchase, except for the fact that the majority of these games have already appeared in plenty of other SEGA packages over the last few years. This is no longer a retro gaming feast - it's SEGA being extremely lazy and churning out yet another oldies pack for you to waste your money on.

Let's list the games in full so we know what we're dealing with: You've got Sonic the Hedgehog, Ecco the Dolphin, Golden Axe, Altered Beast, Comix Zone, Gain Ground, Shinobi III, Vectorman, Crack Down and Space Harrier II. Sounds like quite the assortment, right? Indeed, on first inspection, it would appear so.

That is, until we check out the SEGA Mega Drive: Ultimate Collection that was released last year and realise that we're being taken for a ride. For roughly the same price as this new release, the Ultimate Collection gave us 40 old SEGA games - and you don't need to be a maths wiz to know that's a far better deal than the Classic Collection's measly 10.

Still, let's look at what is on offer. Sonic the Hedgehog is the most instantly recognisable, and with a quick playthrough shows that it hasn't lost any of its magic. This is the game that started off one of the very first videogames franchises, and you can definitely see why.

Other obvious choices like Golden Axe and Ecco the Dolphin beg for you to give them a go too. Golden Axe features two player co-op on a single computer - and fortunately, the control options are really great. Plug in an Xbox 360 controller and the game will recognise it instantly, allowing you to map the buttons however you like.

Then its onto the likes of Altered Beast, Vectorman and Shinobi III, all of which are faithful ports and play just as great as they originally did. These games in particular remind you just how different gaming used to be - they're very difficult indeed, and a game over means starting right back at the start. Completing the majority of the games on this disc is a huge challenge, and if you're the type of gamer who will force yourself through the lot, you've got plenty of retro gaming ahead of you.

Crack Down, Gain Ground and Space Harrier II bring up the rear, providing some fairly enjoyable play but simultaneously reminding us why gaming has moved on so much. All three can be frustrating and enjoyable in equal measures, and you probably won't spend too much time with them.

Comix Zone provides the best experience on the disc by far, and whether you played it 'back in the day' or not, this is some lovely stuff. Trapped inside his own comic strip, the hero must battle his own creations and find a way out. It's a wonderful concept, and will keep you hooked for a good hour or two.

The whole package is wrapped up in a charming interface. The main title screen shows the title screens of the ten games flickering in the centre of the screen, and selecting one will cause the main menu for that particular game to flash up. Hit play, and it boots in full-screen.

We encountered no framerate issues of any kind, and controls for both keyboard and Xbox controller were solid. All ten games work perfectly with no (new) bugs or issues, and the sound effects and music are all present. These are all great ports that feel just as good to play now as they did back then.

All in all, it's a nice collection for single-player retro bliss, with plenty of opportunities for two-player action. That does not hide the fact, however, that this pack is definitely not worth your cash. As mentioned previously, the majority of these games have already been part of a SEGA retro collection at some point in time, and you'll be able to pick them up for far cheaper.

If you don’t have a console, we still wouldn’t recommend it - especially since you can bet that within the year, SEGA will have released yet another collection that may be better than this one. Why SEGA have decided to penalise PC gamers is a mystery in itself.

Transforming into a variety of different, epic creatures in Altered Beast. 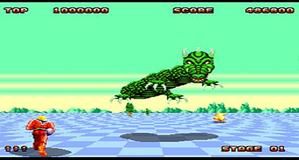