It’s difficult not to be attracted to the premise of Skyhill. Developed by Russian code-house Mandragora Games, Skyhill whisks players to the top floor of a hotel skyscraper following the aftermath of World War III, where with flesh-eating mutants now roaming about the place, they are forced to survive a one-hundred floor descent to the exit. Self-described as a ‘click and survive game’, Skyhill combines two-dimensional procedural generated levels, combat and crafting to create an experience which while might appear unique and fresh, sadly fails to fulfil its potential.

Undoubtedly the biggest problem lies in the variety, or rather, the lack of it. Despite embracing a procedurally generated content model, Skyhill’s searchable interiors all feel far too similar to one another. A big reason for this grating as much as it does is that the level layouts themselves are horrendously simplistic, with a main lobby and a single room on either side being the de-facto layout repeated throughout the game’s hundred or so floors. 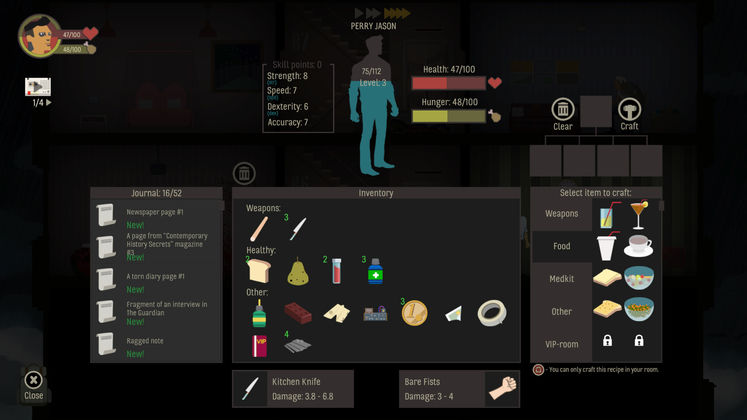 If such a lack of design ambition is keenly felt in Skyhill’s navigable interiors, then so too is it also felt elsewhere. Combat for example, is a largely unsatisfying endeavour due to a number of different factors, chief among these being how flimsy and unsatisfying it all feels. From strikes with iron pipes to arcing slashes with machetes and scythes, scrapping with the handful of different mutants that you’ll encounter throughout the game never feels tangibly solid, with repetitive animations and overly tame sound effects detracting from what should be some pretty severe and bombastic violence.

In terms of the actual mechanics that lurk behind Skyhill’s combat, it’s a strictly turn-based affair that revolves around the use of varying melee weapons while stat-influenced dice roll style shenanigans help to decide the outcome of each fight. Again, the lack of variety hurts the essence of it since aside from only having a small handful of different enemies to fight and weapons to use, every fight is always contested face-to-face with no scope for strategy to be employed. Essentially, it’s the equivalent of rock em’ sock em’ robots with roughly the same level of tactical nuance, even if the presence of weak spots on your enemies does afford a little strategical consideration.

Uninspiring room layouts and monster smackery aside, Skyhill actually does some of its best work with how it handles the crafting, narrative and roguelike elements of the experience. In the case of the crafting, Skyhill allows players to construct everything from new weapons and utilities to medical supplies and food all from materials scavenged from each of the game’s one hundred floors. It’s a decently handled system which makes the discovery of new materials and components both a worthwhile and satisfying activity.

Some more complicated items however, such as mobile power generators, can only be fashioned with the aid of a tool bench which is located on the top floor of the building. Luckily, lifts located on each floor allow players to return to the top floor with relative ease, the caveat of course being that these lifts have to be in working order in order for them to be used. 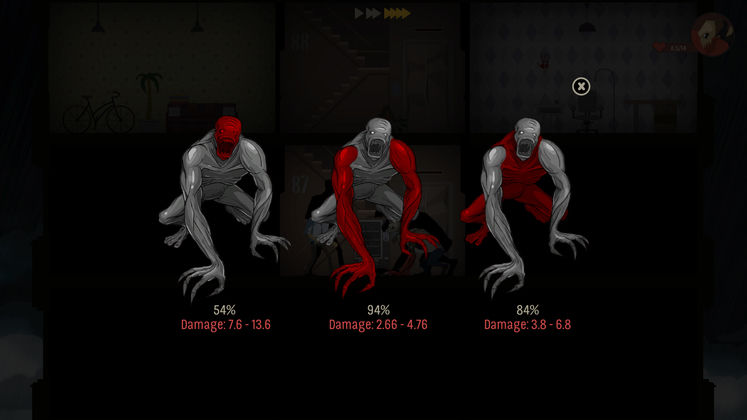 Speaking of lifts, in order to fix the ruddy things you must first restore power to not only the floor you’re currently on, but also the floor above as well. This can be achieved by installing a crafted generator you made earlier, or, you can opt to use whatever materials that you have on your person to effectively improvise some sort of quick-fix solution. Despite the fact that bodging a solution in this way should yield seldom success, here, it seems to be far more effective than it has any right to be and unfortunately renders the desire for the proper solution somewhat moot in the process.

Adding a little more insult to injury though, is the bug that sometimes fails to recognise the fact that you’ve actually fixed the electrics. It’s happened on a number of occasions where if you restore the power to the current and above floors, the lift still doesn’t work – which takes away a lot of the crafting and survival opportunities available to the player as a result. Hopefully this is something that swiftly can be addressed by a patch in the near future.

As to how progression through the game goes, you can actually get quite far on your first attempt – indeed on Normal setting, Skyhill generally becomes properly challenging just after the halfway mark where keeping an eye on both your health and hunger levels becomes more necessity than a chore as the game wheels out the stronger baddies to stop you in your tracks. Hunger especially is something that you’ll want to keep an eye on too, since every time you move from one area to another, a point is deducted; the long-term upshot being that you’ll find yourself juggling the two as a neat risk/reward dynamic comes into play as you balance the need for loot against other potential dangers that you might face.

Additionally, a levelling up system also comes into play early on, allowing players to pile precious experience points into strength, dexterity, accuracy and other stats in a bid to improve their chances the further they proceed down the skyscraper. Somewhat disappointingly though, such progression is rooted in the combat side of things, with little opportunity to upgrade any other aspect of your character in any sort of meaningful fashion. Chiefly also is the accrual of experience mostly rooted in the act of smacking things to death; something that seems a little odd when a game such as this seemingly seeks to place a focus on exploration and combat, rather than just the latter. 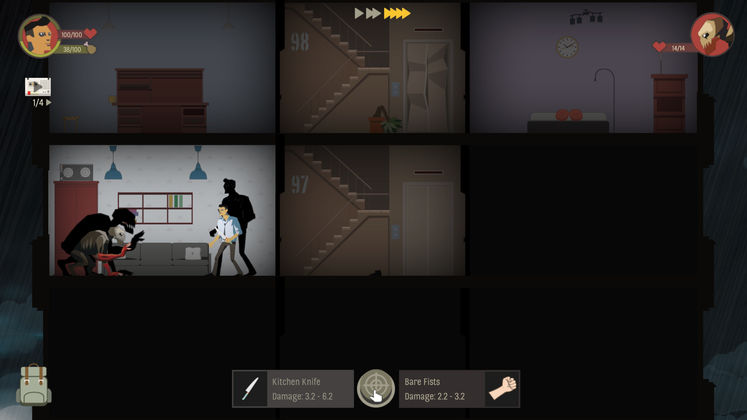 Narratively, Skyhill imparts its story through two different mediums. Journals dotted around the place provide exposition on the mutant apocalypse at large, while collectible recordings showcase the account of a previous occupant and their struggle against the events which unfold within the Skyhill hotel. This actually forms one of the main reasons to replay the game beyond completion, since the appearance of these journals is random and with over fifty of the things to pick up, it’ll be a good while before you’ve hoovered up all of them.

Speaking of replaying the game, the developer has essentially nailed one of the main elements that make decent roguelikes, well, decent. You see, each time you die your character is graded on how they’ve done, with key progression milestones unlocking additional perks and gameplay modifiers to help make consecutive runs go that little bit easier. Quite frankly, it’s a nicely implemented system that takes the sting out of repeated deaths and in doing so, encourages fresh attempts in a way that all roguelike efforts really should.

Ultimately, Skyhill brings to mind 11-bit Studios seminal survivalist opus This War of Mine, though in doing so it invites comparisons it can’t possibly survive as the former feels much more reduced in scope and flair than the latter. While entertaining for the most part then, Skyhill’s ease of play and encouragingly gentle roguelike mechanics are not quite enough to allow the game to reach the ambitious heights of the structure that it takes as its namesake.

Getting a close call by eeking out a kill with just a few HP left. 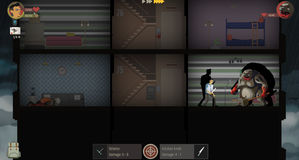