Does Double Fine have a hit, or are the odds stacked against it?

Double Fine Productions is one of the most exciting developers in the digital gaming distribution space at the moment. This is not open for debate - it might as well be fact. With every new title the team announces, our anticipation levels rise to dangerous levels thanks to Double Fine's tendency to break from the norm.

Case in point - Stacking. When was the last time you saw Russian dolls in a game, let alone saw them as the main concept? It's one of those 'why hasn't this been done before?' moments, and from the first tidbit of information we received regarding the XBLA and PSN release, we were intrigued. With good reason too, as it turns out that Stacking is indeed an absolute gem that deserves your attention.


The action is wonderful, the puzzles are clever and the atmosphere is far too charming for its own good. It's a little on the short side, mind, and the 'doll jumps inside another doll' concept does begin to saturate towards the end. However, this is the type of gaming release we should celebrate profusely, in the hope of seeing even more varied experiments in the future.

You are Charlie Blackmore, a teeny tiny matryoshka doll whose family has been kidnapped by the evil Baron. While his size may appear to be a hindrance, it's anything but - Charlie has the ability to sneak up behind a doll that is one size bigger than himself, and stack himself inside them, taking control over their body and unique ability. From there, he can then stack this doll inside another doll one size up, and so on.

The story of Charlie's adventures is told in the style of a classic silent movie, with piano pieces playing through and title cards showing the dialogue. You see, it wasn't enough for Double Fine to simply break out the Russian dolls concept - a completely surreal and barely-used setting and environment were thrown in for good measure too.

Coupled with the stacking puzzle elements, the game is brought to life with humour and exuberance. The idea in each area is that there are people who need helping or obstacles that need overcoming, and you'll be asked to use the surrounding dolls to beat these challenges. Each doll has its own unique ability that may or may not be helpful in each situation, and it's your job to find out which works where.

But here's the kicker - there isn't one single solution to each problem. In fact, there are between three and five different ways to complete each challenge, and finding each one is Stacking's main source of entertainment. Some are obvious and even hinted at by the main challenge itself, while others involving uses dolls' abilities in the most weird and wonderful ways.


What this means is that Stacking, while advertised as a single player experience, is in fact the perfect game to play with a bunch of friends. Sitting around and working together to decipher every last solution is such a joy, just as, say, finding every jigsaw piece in Braid was. Most of the solutions are quite hilarious too, so Stacking is providing both puzzling genius and spot-on laughs.

There's far more to the game than simply the challenges. Each world has a huge number of unique dolls for you to find, along with sets of dolls that must all be stacked together - for example, in the main train station hub, you're asked to find a family of German dolls, starting with the young son, stacking him inside his sister and then finally encasing them both inside the mother. Exploring is just as much fun as the puzzles.

Each world also has its own 'Hi-jinks' - occurrences in which you use a character's ability in a silly way. Using the German example again, the young boy will warn that he needs to relieve him when you talk to him, so taking control of his doll and visiting the toilet will grab you that particular Hi-jink. As if there wasn't enough to do in this game already.

Note, however, that rather than feeling like an added bonus, all these extras are in fact very much the main course. This is due to the brevity of the main story - an undertaking that can easily be completed in an evening. With the added solutions and Hi-jinks to find, there's plenty more to come after that, but those gamers who aren't particularly into their additional play material may well feel stiffed.

Part of the reason why Stacking is so short is that it's main source of entertainment is also its downfall - since there are multiple solutions to each challenge, it also means that there is always at least one solution which is blantantly obvious and poses no challenge whatsoever. Going for the other solutions may prove tricky, but you eventually go into the challenges knowing that there's going to be at least one cheap method for completion, putting a slight downer on the whole concept.


The puzzles also begin to feel a little shallow towards the end. There's only so much you can get out of the concept, it would seem, as by the last level, you're simply reusing old abilities and ideas in various orders. The last boss in particular is quite dull, featuring not a single unique idea that you've not already seen.

Stacking is an essential purchase that will leave a smile on your face for days to come. It needed a little more content and variety, sure, but we’ll tell you one thing - we’re definitely looking forward to what Double Fine has for us next.

Solving a challenge in the most bizarre and wonderful way. 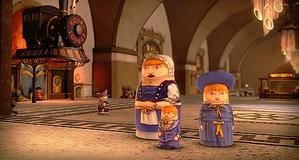