The beat 'em up king is back

As a child, I would think of videogames as interactive cartoons where you’d press a button and a little plumber would jump or a Ninja Turtle would kick. As an adult, I know there’s much more to it than that, but there’s still something to be said about the novelty of controlling your own animated adventure, and I believe that no franchise embodies that sentiment better than Streets of Rage.

Move to the right, beat up bad guys and enjoy some kick-ass music and animation. The franchise may have been through a lot since its inception back in 1991, but this is still at the core of each one of these games. With the latest iteration of the series, Dotemu knew that it wasn’t really necessary to reinvent the beat ‘em up wheel, so they just went ahead and perfected the formula with Streets of Rage 4. 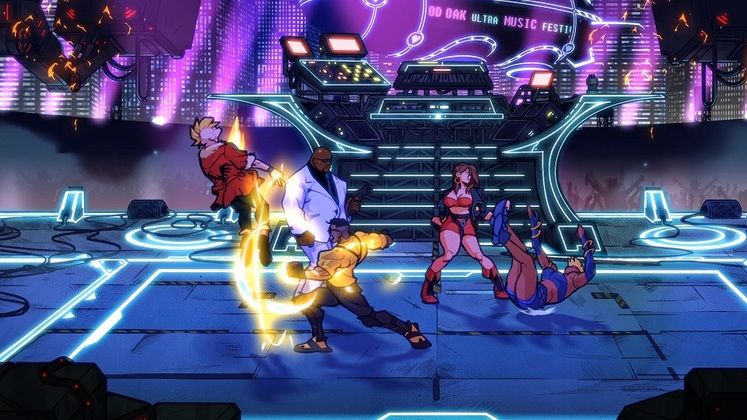 Ten years after Streets of Rage 3 (26 in real life), we return to the same bustling metropolis from previous games, which has now been taken over by a crime syndicate run by the deceased Mr. X’s offspring. Enraged by the violent thugs and rampant corruption, vigilantes Axel Stone and Blaze Fielding return to clean up the streets alongside Adam Hunter’s rock-and-rolling daughter Cherry, and the cybernetically-enhanced Floyd Iraia. Of course, other familiar characters are unlocked along the way as players fight their way to the top in yet another harrowing adventure through this urban dystopia.

While there isn’t much depth to the plot, this setup is more than enough to put players on the path to beating up an army of evil-doers in a game that, much like its predecessors, owes a lot to classic movies like The Warriors and Streets of Fire. In fact, the city itself feels like a character here, with often-humorous graffiti and futuristic background details telling a more entertaining story than the actual cutscenes and dialogue.

Gameplay-wise, things haven’t changed much since the previous titles, as you still have a main attack button that can be combined with directional inputs for basic punches and kicks while special moves sacrifice some of your health for improved damage. However, this time around you have a brief opportunity to recover some of that lost health by rapidly beating down enemies right after activating a special. 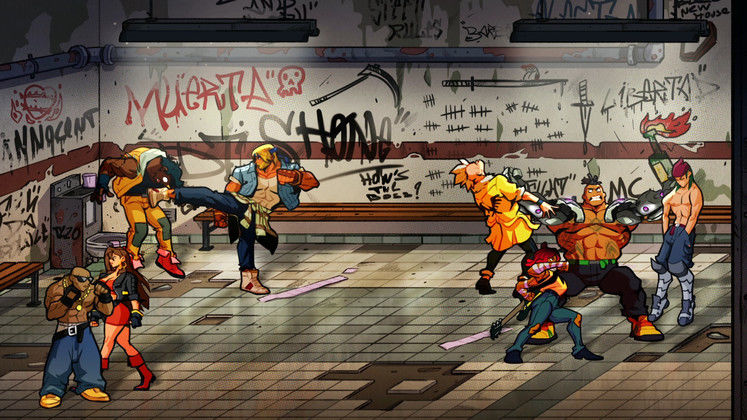 There’s no need to fix what isn’t broken, so I’m actually glad that the developers focused on perfecting this established formula rather than reinventing it. That being said, much like the original games, co-op is almost necessary in order to fully enjoy the experience here. The game is fun enough on your own with its easy-to-understand but difficult-to-master moveset, but nothing beats teaming up with a friend as you fight your way through a gauntlet of murderous goons.

Regardless of how you choose to play, though, be it through the online modes or even couch co-op, I think it’s safe to say that the insane visuals and art direction are the real stars of the show here. Factor in the breathtaking level design and silky-smooth animation and you’ve got one of the best-looking games of the year (so far). Even the new characters are great and fit right in with the rest of this anarchic dystopia, and I especially loved the updated henchmen designs.

The new soundtrack is also amazing, but purists are offered the option to enable a retro mode, which repurposes tracks from the first few games. I only messed around with this feature out of curiosity, since I was more than satisfied with the new music, but the fact that these older tracks are included at all is a nifty little bonus. 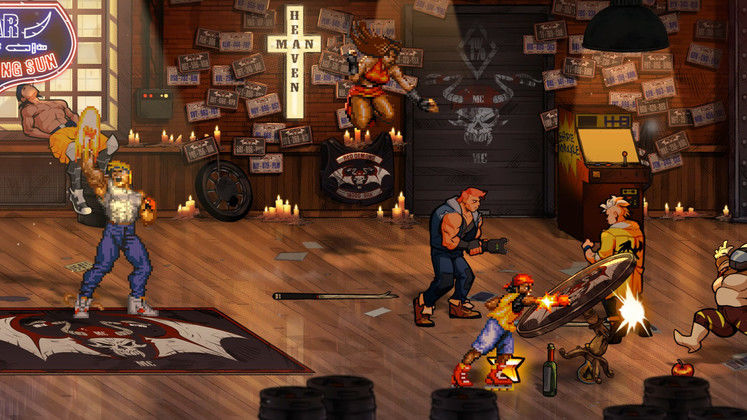 Honestly, the only part of the presentation that felt lacking were the cheap-looking animated cutscenes. While it’s nothing new to the series, the lack of voice acting feels strange in a modern title, and some of the “animation” here feels really cheap. It’s not a deal-breaker, but better cutscenes and transitions would have made this 2D gem stand out even more as a return to form for the series.

The campaign is also relatively short, despite being one of the longest in the franchise. This is almost invariably the case with arcade-style beat ‘em ups, but gamers should still consider exactly how much bang they’ll be getting for their buck when purchasing Streets of Rage 4 (though there are quite a few extras and alternate modes to unlock once the campaign is over with).

All-in-all, this is the most fun I’ve had with multiplayer these past few months, and I’d recommend this game to both newcomers and Streets of Rage fanatics alike. Not only is this a heartfelt throwback to the golden years of couch co-op, but it’s also an extremely well-balanced and impeccably crafted romp through a city in need of saving.

Invading a pretentious art gallery and using the exhibits as weapons against its criminal patrons. 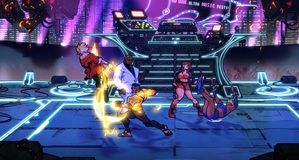