Such a varied setting would seem to be the perfect idea for a game of geopolitics, where players could control the destinies of nations big and small 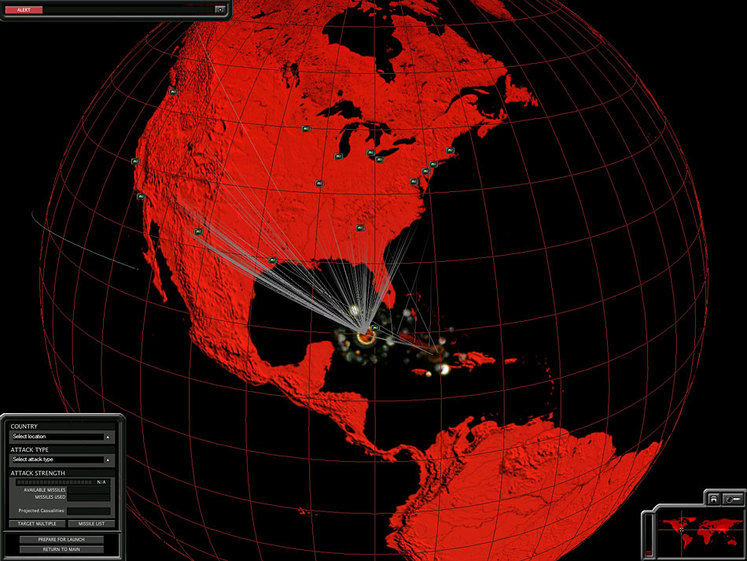 We live in interesting times, to paraphrase the ancient Chinese saying. All over the globe, in this modern world of instant communications, over 180 nations are busy acting in their own interests, and with, and against one another, to effect the living standard and the very way of life of the people of the earth. Such a varied setting would seem to be the perfect idea for a game of geopolitics, where players could control the destinies of nations big and small. Superpower 2 attempts to be that game, but somehow manages to fall short of its goal.

The game features data and control of any nation on earth, gleaned from the CIA's data files, or so the game box tells me. Both the game design and the data seem to remind me of the 1980s movie 'wargames,' which was set in the days of primitive PCs, and computers operated exclusively over phone lines. It even runs a program called 'Joshua,' which was the super computer's name in the flick. 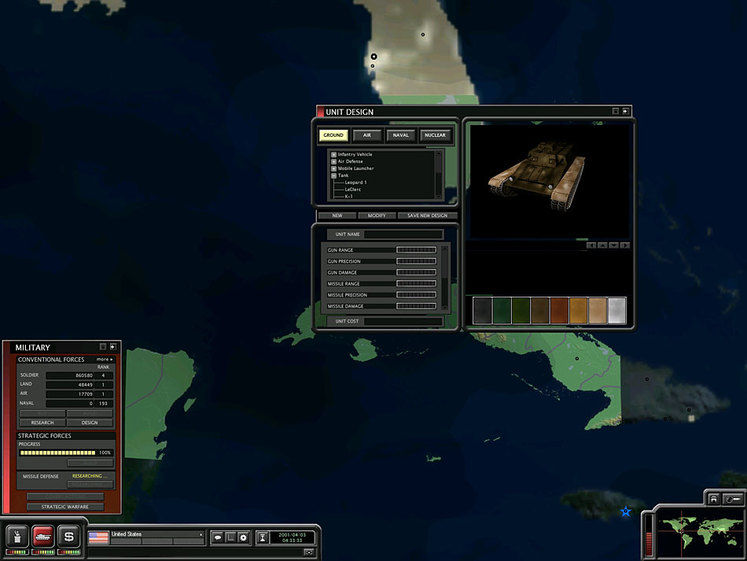 The game is presented in a planet side world view, which can show graphics and country data several different ways. You can view nation data, shift the earth, spin it, view either pole, and so on. Their is a night and day cycle, and you will see countries lit up at night, as well as full terrain if you zoom in. The extreme zoom in is used to view actual topographical data, where you can see roads, rivers, cities and other features. If you like playing with globes and maps, this can amuse you for a time, and it had better, because either isn't really much else to do in the game.

Gameplay is centered around the scenarios, and free form games with a nation of your choice, where you will control every aspect of the country. Using subscreen menus, that are accessed from the globe map, is where you make your decisions on what to do. The first thing is to determine what your goal is, in the first scenario, you have to improve Turkey to gain EU admittance. Looking at the economic screens, you will see that nation is running at a severe deficit, so its going to take time to fix it. But here we see the first real problem in the game. You can simply stop funding things, to little or no ill effect, while paying off the debt. I simply turned off propaganda, and a few other items, revved up healthcare spending and education, and before you know it, Turkey is in the black, ready to join the EU. It was just too easy. 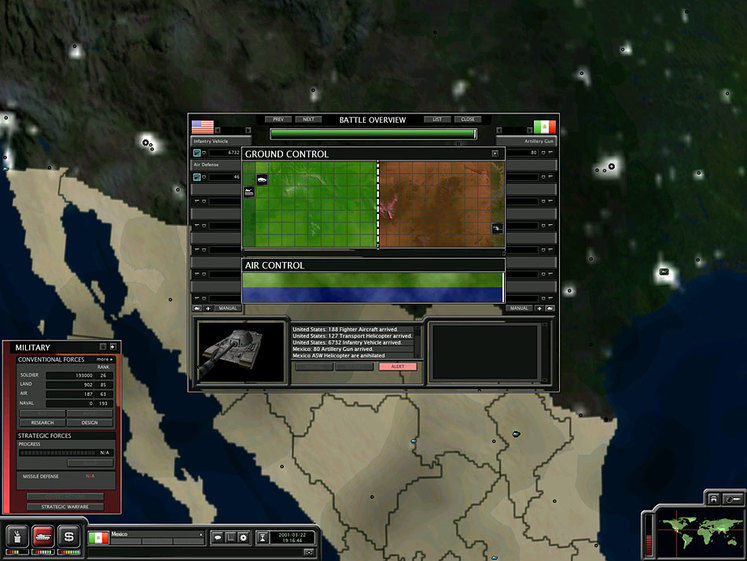 The economic subscreens are quite detailed however,.and include plenty of perks, if you are an economist. Since I'm not, I had little clue as to what a lot of the data was telling me, I just followed the old tried and true axiom, save money, cut spending. A game of global geopolitics should not be so simple. I really saw no checks or balances to my actions.

The political subscreens are very much like the economic sub screens, lots of data, little activity. The game allows what would seem to be a wide range of options, but again, there is little or no downside to your actions. You could make the US a theocracy, but so what? You could make Islam the national religion of Japan, and it really wouldn't matter much. The only thing that seems to draw any reaction is political dirty tricks done to other nations, and military activity. 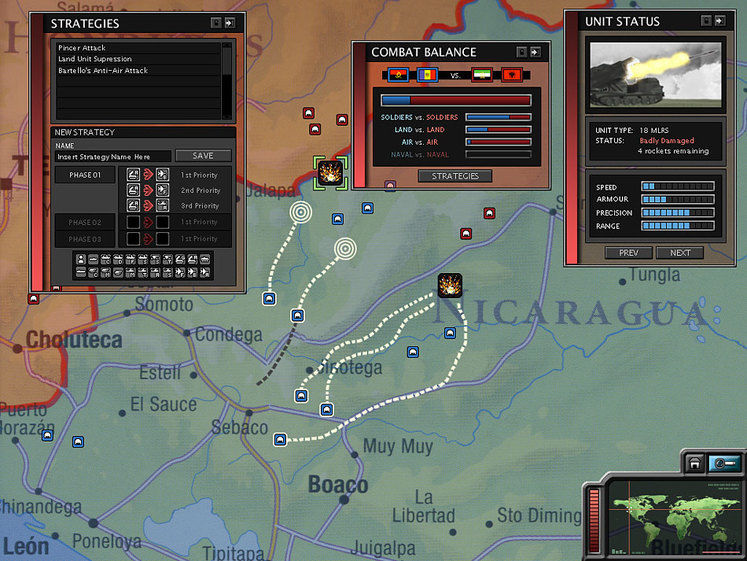 The war aspect of game is abstract to a certain degree. Ground, air, and naval power is represented as a series of numbers in armies. You can research and build improved weapon systems, and the game includes some limited design tools to make and paint your own planes, tanks and helicopters. In battle, combined arms makes a slight difference, but the computer just places icons on a terrain map, and subtracts numbers, with some pedestrian combat effects thrown in, totally uninspiring.

The game has two tutorials, that explain how to play, but it is text heavy, as is most of this game. There seems to be considerable stability problems also, I had several crashes to desk top while playing. The music is alright for the game, but not memorable. The subscreens are easy to use and access, but the print is extremely small, a negative for people with bad eyes (like this game reviewer). 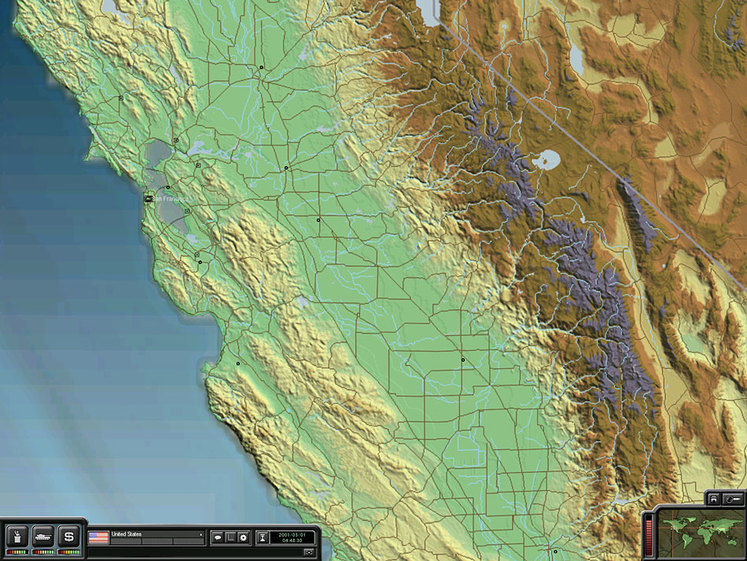 Overall, if your looking for a game of global politics, Superpower could kill an afternoon for you. It isn't all bad, you can start nuclear wars, and invade China just for the hell of it, but as a game, it just wasn't gripping enough. The technical problems aside, gameplay isn't detailed enough to hold your interest in the long run.

Click on the picture to enlarge it Overall, if your looking for a game of global politics, Superpower could kill an afternoon for you. It isn’t all bad, you can start nuclear wars, and invade China just for the hell of it, but as a game, it just wasn’t gripping enough. The technical problems aside, gameplay isn’t detailed enough to hold your interest in the long run. 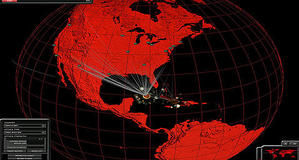