The Council - Episode 1: The Mad Ones Review 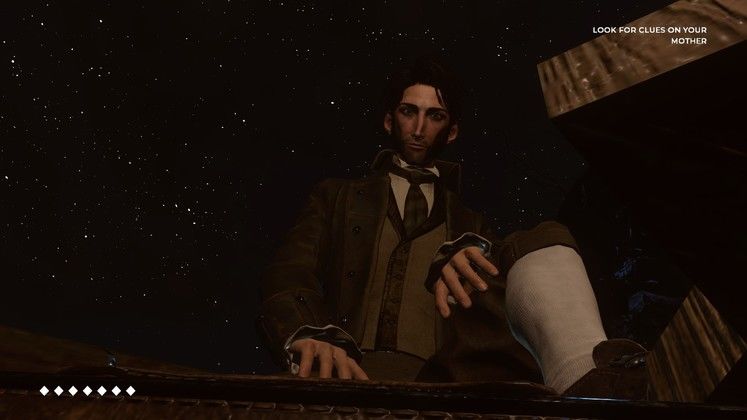 The Walking Dead from Telltale Games came out in 2012. Since then they’ve released dozens of excellent adventures in their own style, but surprisingly few competitors. Life Is Strange and its prequel, Planet of the Apes: Last Frontier (which is still not out on PC), and now The Council from Focus Interactive, Cyanide and Big Bad Wolf Studios.

The difference with The Council though is that it intends to deepen the mechanics of the choose-your-own-adventure Telltale specialize in, with extra twists to make it a more involving experience. Have they succeeded? Let’s find out.

Check out our list of the Best Adventure Games on PC! The Council is almost like an 18th Century James Bond tale, right down to starting with the main character – Louis de Richet, member of a secret society called the Golden Order – in a compromising situation that he has to escape from. After that the main story begins. Louis receives an invite to travel to the island home of the mysterious Lord Mortimer, as Louis’ mother Sarah has gone missing. There he has to investigate the guests and uncover his mother’s whereabouts – and plans. 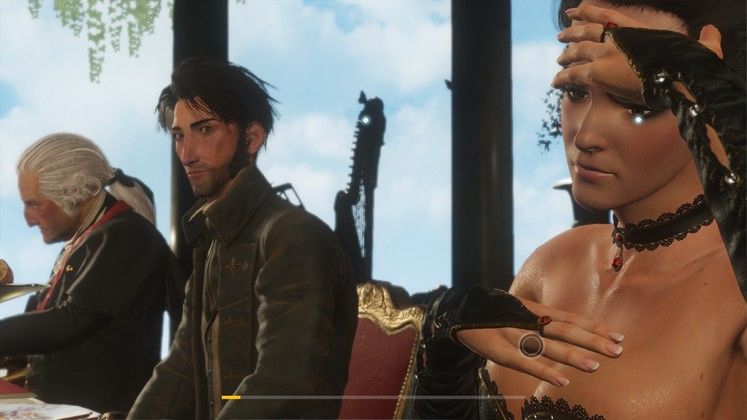 There is a lot to like about The Council, and it starts with the characters. All the characters have their own agendas and personalities, and the game actually plays up the personality angle by having Louis talk to each person to discover their likes, dislikes, vulnerabilities and strengths. Louis can then use their own personalities against them, or to assist them, and that’s really clever – Big Bad Wolf have actually made the concept of having a fully fleshed-out interesting set characters into a gameplay feature!

Louis himself is a slightly typical adventure game protagonist, in the inquisitive type rather than the bumbling Guybrush Threepwood variety. The player instead gets to create their own kind of player character through the RPG-like Class system, which is one of the innovations Big Bad Wolf brings in. At the start the player can choose what type of personality class they want Louis to be – Diplomat (with more dialogue options), Occultist (more knowledgeable), and Detective (notices details and investigates easily). Louis earns XP based on how successful he is, which you can put into skills in the other Classes – but it’s easier for him to unlock skills in the Class you’ve chosen. 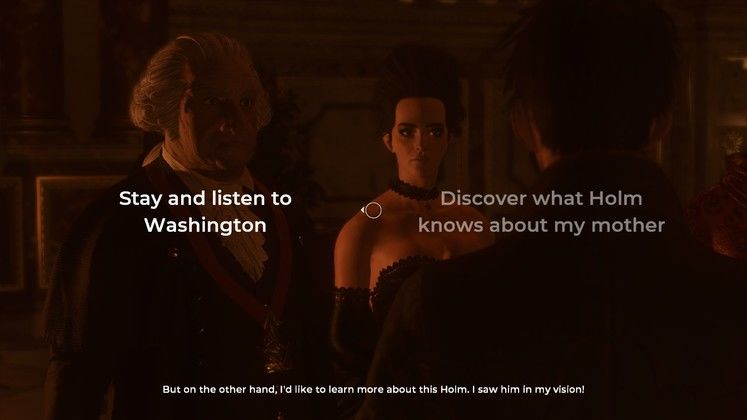 This RPG system changes the entire game, and will definitely encourage replay value since there will be gameplay options open to one Class that the others can’t do, like being able to read a foreign language or pick locks. While cool, the biggest complaint we have about The Council is that we hate how it constantly tells the player that they can’t do something. It’s neat that there are all these options, but if they’re all locked off it feels like the game’s rubbing it in your face that you made a wrong Class choice. Feel free to say we can’t pick a lock – but don’t tell the player off for not having a skill they couldn’t have possibly known they’d need.

There are puzzles occasionally, but it’s probably more accurate to say there are investigations. If there are any puzzles, such as a classic statue-rotating one with a Medusa later in the episode, simply investigating the area combined with use of Effort Points can brute force you through the puzzle or dialogue interrogation. Louis only has a certain amount of Effort Points to spend on helpful actions, and while these can be replenished with items you do have to carefully choose whether it’s worth the Effort. Choices absolutely do matter, like in a Telltale game, and you can either learn something or not – although sometimes it does feel like choices do get taken away arbitrarily. 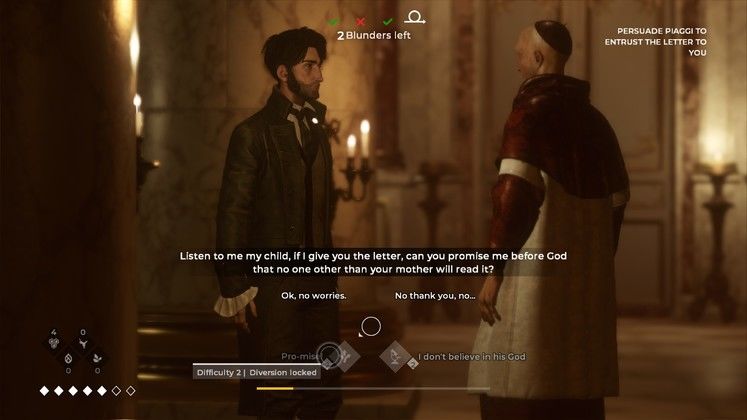 Speaking of items, everything involving items in the game we’re not a fan of. For starters interaction markers, which are scattered around the Mortimer Manor and can denote either something of interest or a useful item, are far too subtle and are easy to miss. Using items is a pain, since they can only be activated through number keys and the icons aren’t on screen at all times – you have to use one to see what it is, and when looking up what the items do they’re not in the correct order (pressing ‘1’ will replenish Effort, but this item is in slot 2 in the inventory).

Furthermore with the addition of these items it turns exploring the manor into an item hunt, and the addition of pointless collectable coins makes it worse. We would much rather have all these useable items cut altogether, and just force players to make tough choices - or replenish Effort Points some other way, like making a good deduction. The system does work and is enjoyable, but it does overcomplicate what should be just an interesting investigation system. Investigating and interrogating is fun – combing the halls for interaction markers is not. 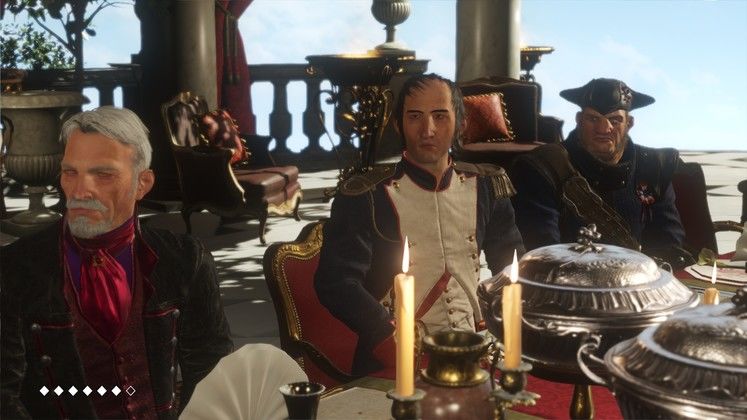 Our system is an AMD FX-6300 Six-Core Processor, 16 Gb RAM, Nvidia GTX 1050 Ti 4Gb, and Windows 10 64-Bit, and we mostly ran the game fine in its highest settings, although we did encounter occasional slowdown when entering a new, particularly complicated area. It does look pretty good, with lots of detail everywhere, and the animation can be excellent – although it does slip occasionally, as does the acting. Mostly the acting is more than acceptable, but occasionally Louis or one of the other characters forgets to show some emotion. We’ve seen far worse however, and the writing is almost always very good too. 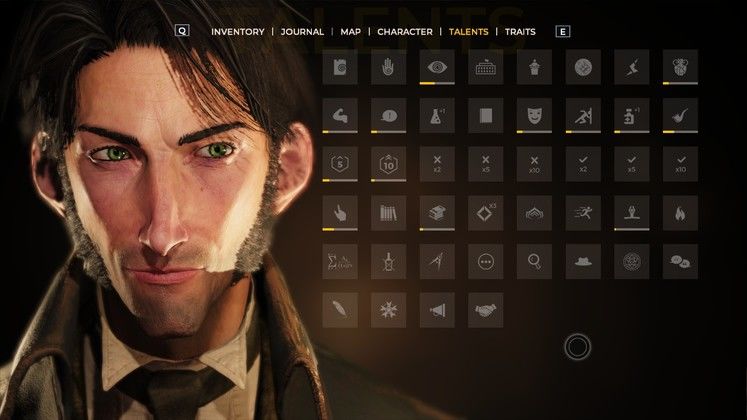 The Council, just going by the first episode, is a very good attempt to evolve the choose-your-own adventure game style, going far beyond what Telltale have attempted. The story so far is intriguing, and all the characters not only have distinct wants and needs but Big Bad Wolf have actually made their distinct personalities a key part of gameplay, which is very clever. Choices all seem to matter, and the introduction of RPG-like elements such as Classes and improving abilities add a lot to the replay value and enjoyment. Nevertheless there are problems, such as The Council unhelpfully telling you every time you can’t do a choice, and the overreliance on replenishing items, which turns fun exploration of the manor into a scavenger hunt.

The Council is off to an excellent, intriguing and suspenseful start, and the minor issues it has didn’t really make us enjoy it any less. We’re already looking forward to Episode 2, especially after the cliffhanger conclusion which promises to ramp the action up, and that’s the best endorsement we can give.

Solving the Medusa puzzle was particularly satisfying, although the cliffhanger ending was quite shocking and promises to knock the action up a notch. 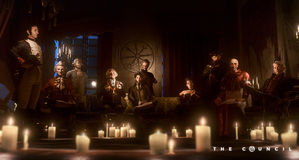