We are pretty far removed from the heyday of rhythm games when Dance Dance Revolution machines littered arcades and had lines and crowds around them and when Guitar Hero and Rock Band games were coming out around once a year. The concept was played to death to say the least and even though there have been some games here and there, it’s certainly not a thing like it was in the mid-2000s. A few years removed from that, maybe it’s one of the things that makes Kasedo Games’ The Metronomicon so charming, or maybe it’s the fact that it takes that formula and spins it wonderfully with fantasy-fiction RPG elements. Either way, it’s a winning combination of style, humor, and a pretty sweet soundtrack to kill monsters to.

The game takes place in your usual fantasy-fiction world full of monsters like trolls, skeletons, ogres, and the like. The only difference is that in The Metronomicon, monsters are summoned to gatherings (parties and raves) by music with mystical properties that drives them into a frenzy. To that end, the powers of good established a school that teaches young warriors, mages, clerics, and other typical RPG classes to imbue their regular fighting talents with the power of dance. It makes for a pretty ridiculous set-up, not to mention a more than self-aware one. It gets a little corny sometimes, but generally, when The Metronomicon isn’t stylish, it’ll pull a chuckle out of you now and then with its antics. 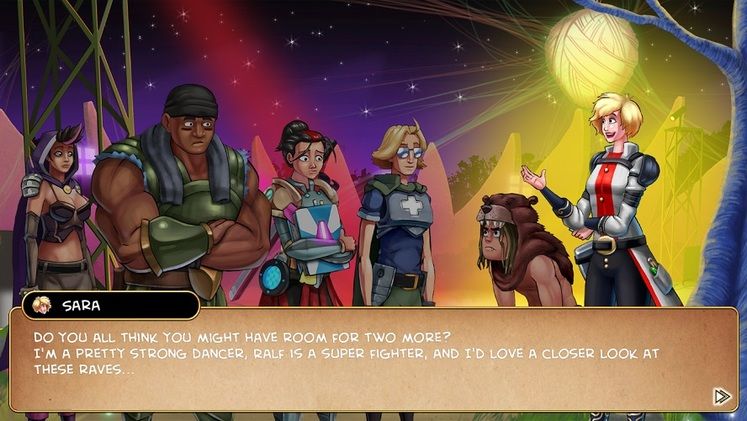 Believe it or not, that dog man down there can cut some moves.

When gatherings start, you take off to the location where you’re treated with a song list. You must complete a set number of songs in order to unlock a boss fight song that will clear the stage, but every song has some kind of reward for completing it, be it equipable gear to boost your stats or Street Cred currency that can be used to purchase power-ups or bonus features of the game, so it’s a good idea to try to clear them all. You can also collect crystals from defeating monsters that can be used to unlock songs to listen to at your leisure.

“Equipping gear? Defeating monsters?” you wonder. “I thought this was a rhythm game.” Yes. It is, but what’s the point of having all this RPG splendor of you’re not going to use it? Fortunately, The Metronomicon does make use of its set-up in a pretty clever way. When a song starts, you have four party members in a line. As the beats pick up, you start on a single character and hit the arrows or symbols to them in time to the song in true Dance Dance Revolution fashion. The twist is that once you finish a set of notes, you queue an attack for the character you’re controlling at the time. Switch to another character or skip a note in the chain and they’ll launch the attack you’ve prepared for them. 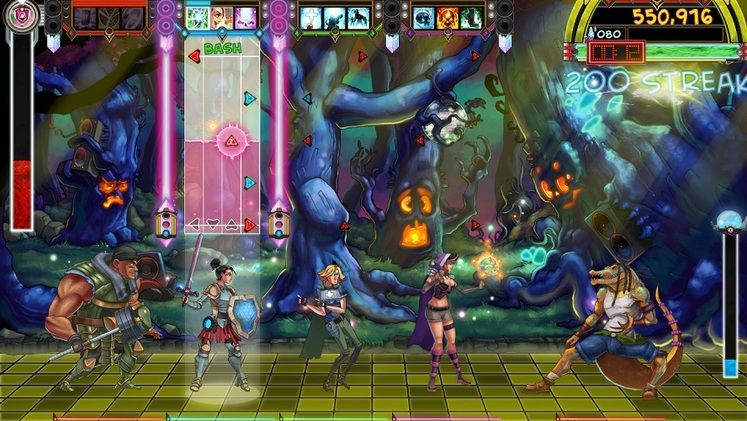 The change in color denotes the end note to queue that ability or move onto a higher tier ability.

Players that have seen or played the Theatrhythm Final Fantasy games might be most familiar with what’s presented here, but there are a few distinct differences. You have a life bar, and the bar is maintained by hitting notes, but monsters can also damage you and there are actual stats, status effects, mechanics, and life bars to manage in addition to just doing the rhythm. For instance, Gwen is a protector who serves as a damage sponge and distraction for monsters. Hit her first set of notes and she use bash which stuns enemy monsters and interrupt their attacks. Meanwhile, Clark is a healer that can restore your life bar as well as cast shields and remove status affects monsters might inflict on you.

More importantly, there are elements to consider in this game. Each monster has an element, whether it’s fire, water, earth, lightning, or physical and each has a corresponding weakness. That’s where Violet comes in. She’s one of the magic users you’ll have in the game and her spells are great for targeting enemy weaknesses. The way in which you access different attacks is rather clever as well. As you complete songs, characters will level up based on how long of a chain you can keep in the beat and how many monsters you kill. In leveling up, they’ll get abilities that you can slot into several spots. 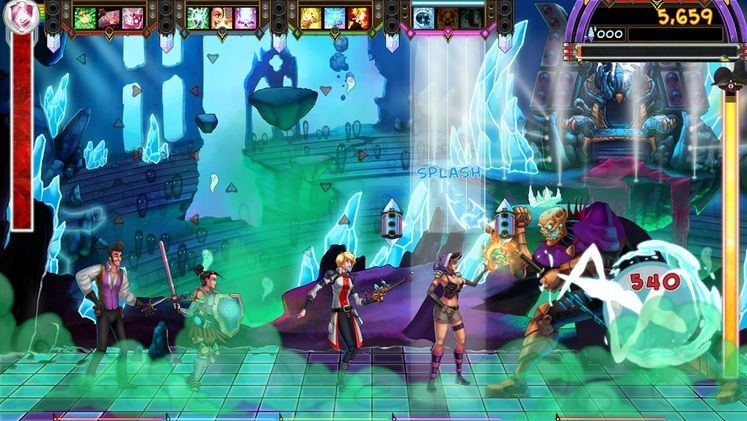 Recognizing your enemy's weaknesses and hitting them where it hurts is key to mowing monsters down quickly.

Active abilities can be placed at a one, two, or three-level spot. The higher the level, the stronger the ability’s effect will be, but also the longer the beat chain you have to complete to queue it up. Gwen’s bash is her level one skill, but soon enough she gets Taunt, which invites enemy attacks to her. Violet starts with Splash and Fire, but she eventually gets the earth-based Rumble. Moreover, you can interchange each spell between your level slots to change their power and focus upon what you’ll need most in a given area. Additionally, there are passive abilities that activate after either a pre-determined number of completed beats or consecutive beats. Building a team that can target weaknesses and kill enemies quickly as you play through the songs in The Metronomicon is a very customizable and enjoyable experience and as you finish areas, you get more characters, just building the repertoire of opportunities.

Of course, it means nothing if you don’t have good music to play the game to. Theatrhythm had the constraint of mostly being tied to game music and although the Square Enix RPG soundtracks aren’t bad, The Metronomicon has no such constraint. It’s song list is an eclectic mix of pop, rock, dubstep, electronica, and dance music that borrows from everything including the likes of Dj CUTMAN, Perturbator, YACHT, Mega Ran, Shiny Toy Guns, and even an exclusive track from Jimmy Urine of Mindless Self Indulgence (easily one of our favorites on the whole list). 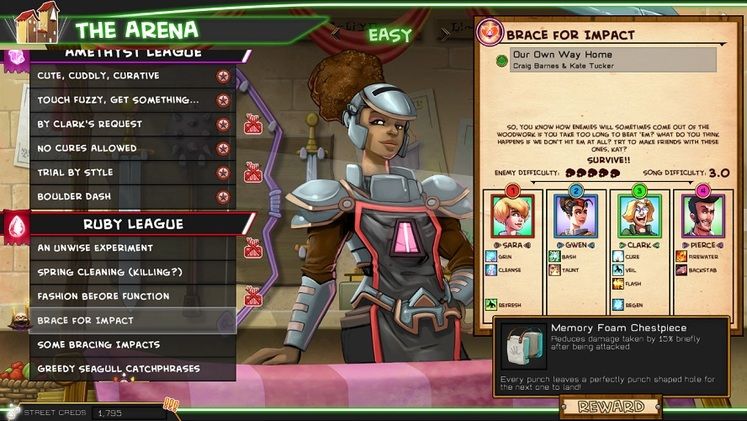 Challenges in the Arena run from easy to downright brutual, even on Easy difficulty.

The Metronomicon runs pretty long for a rhythm as well. The track list is extensive, but even once you’re done with the Story Mode, you can challenge yourself to new difficulty levels, take on Free Play and hit any song, or unlock the Arena to take on numerous challenges both simple and absurdly difficult. Even when the core of the game comes to an end, there’s a lot to do with the multitude of music that The Metronomicon has on display.

If there was anything that brings the game down a bit, we would say it’s that this kind of thing belongs more to a format with a dance pad or peripheral controller than a PC with a keyboard. The game features gamepad support and rightfully so because hitting off-beat notes on medium difficulty is awkward and hard is knuckle-numbing. With all of its mechanics in play, there might be difficulty in making it work, but The Metronomicon really does make us long for the days when rhythm games were king and peripheral controls were abundant.

The Metronomicon is a rhythm game like few others. Any good programmer can put together a soundtrack and slap arrows on the songs, but The Metronomicon sets itself apart by way of numerous RPG mechanics that actually make you strategize a bit while you’re trying to keep the rhythm of the song going. Building note sets, queuing up the attacks, switching party members, defeating enemies, and surviving battles put The Metronomicon quite a step above most other rhythm games we’ve played. Moreover, it has just enough context in its story to keep things amusing in between and the soundtrack is a pretty fantastic mix of contemporary styles across the music industry. We just wish we had a dance pad to go with it when our hands start cramping.

Eventually, you get Team Attacks and launching an All-Out Attack while keeping the rhythm to a particularly good song is a hype machine you can’t stop. 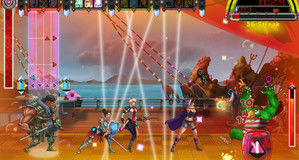