Go for a walk in the Old City

Many pretentious, beardy types will probably chew on their pipes, look to the heavens and wonder aloud “Is The Old City: Leviathan a game?” and “if it is what does that mean?”.

That last question is one you’ll ask yourself a lot during your time with this most walking of walking simulators from PostMod Softworks. And let’s be upfront about it, The Old City has no combat or puzzle-solving at all, aside from the feeling you’ve stumbled in on a conversation between two Harvard Physicists and are trying to figure out what they’re talking about.

Go for a walk in the Old City.

It’s just you, a nameless protagonist wandering around a surreal city and using your eyes and ears to deduce the point of your existence and the walls around you. Sometimes you’ll find notes explaining people, groups and themes you know nothing about and at other times the world will change as you walk back through previous areas. The Old City will always confound you about who you are, where you are and why you’re there. It’s pretty clear that if you want something packed with engaging gameplay systems then you need to look elsewhere… All others… read on.

Like a disclaimer the opening title reads “You are about to inhabit a broken mind. Not everything you see or hear is trustworthy.” Is everything you’re about to see and experience a figment of the characters deranged and unstable imagination? Is it also a statement about video games in general? More beard-stroking needed.

As soon as the world comes into view the narrator begins the first of many monologues about things that make no sense, about a place you don’t know about and about people, groups, orders that you haven’t the foggiest.

Walking speed is achingly slow and every other action only zooms in the camera so you can better look at the exquisitely crafted environments. The point? Unclear at first but you have free reign to walk around, read typed notes on walls and desks and investigate the world you’ve just inhabited. It feels incredibly frustrating and off-putting at first, especially if you didn’t know what to expect.

To be honest I nearly gave up due to this approach and it doesn’t help that this minimalist slant to story-telling (it’s more like story-hiding) comes embedded in a very unsettling audio and visual environment. Though not a survival horror game, The Old City is a disquieting experience. There’s always noise to be heard in the distance though whether it’s made by human hands or just the clanking of old machinery is never clear. Each room, corridor and exterior is crafted with such ruined detail that its very existence can eat away at you as you struggle to figure out what the hell is going on. 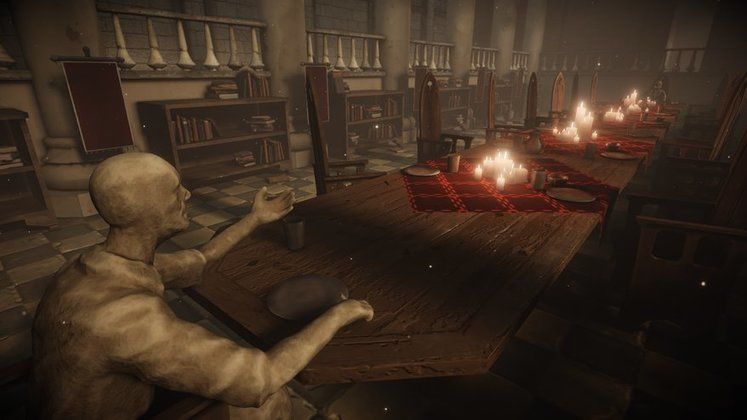 Welcome to the feast of Rapture (with added dust)

I wandered the corridors of the sewer system for ages trying to find a way to progress, to find some answers but the first area of The Old City is stubborn in giving up its secrets. Only after escaping this underground madness did I find relief in the outside air - but that’s when The Old City starts to get properly surreal.

Before that happens the Old City plays a very disturbing trick that shows just how selective it might be with what you’re seeing. After reaching a certain point the empty corridors and rooms of the underground filled out with corpses, blood-stains and writing. Nothing new to video games perhaps but the way The Old City revealed these details was truly disturbing and gave me the kind of chills I only experience when playing Amnesia or the PS4 demo of Silent Hills.

Moving on to above ground, some of what you see defies logic or simple physics. Early on you see sparing remnants of a battle with sandbags blocking entrances. A few scattered rifles lie amongst bullet-holes and dark bloodstains. The guns look old, like a M1 Garand and a lone helmet lying on the ground gives this small portion of the city a very WW2 feel. Like you’ve stumbled into the last battle of a war that’s long since ended along with the people in it.

In that same environment where you can see remains that you can fully grasp and understand come scenes that you can’t. Whether they be monsters in the protagonists mind or actual monsters of this Old City is never clear and it’s up to you to decide, though The Old City seemed laced with metaphor and meaning rather than physical threats.

Does this all translate into a coherent, playable video game? Well, yeah. Although you’re going to have to be the kind of Sherlockian sleuth that likes to figure out a video game world beginning with zero. The thrill of a game like this, as with The Stanley Parable or The Vanishing Of Ethan Carter to name two, is discovery and understanding. The Old City has a story to tell but it obfuscates and misleads in equal measure to the point of frustration. The speed with which you travel is an obvious source of contention as it is painfully slow. However beautiful and detailed the environments are, the way you are forced to crawl like a snail feels like a developers overbearing proudness at their creation a bit too much. 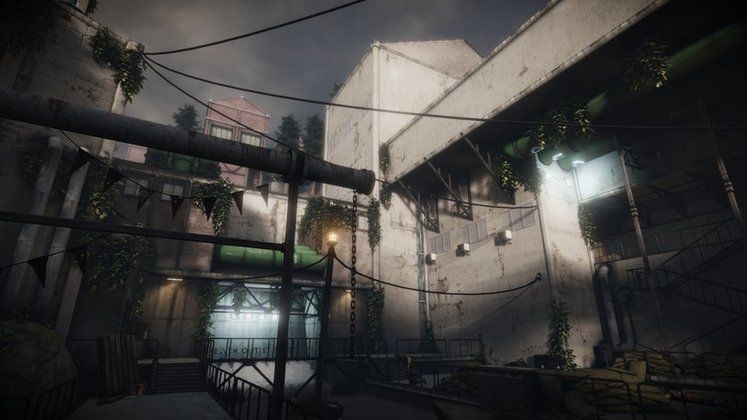 Some of Leviathans locations look real, others less so...

Each chapter of the game also adds a layer of narrative that’s actually far too verbose. Finding small illuminated boxes unlocks Solomon’s Notes - essentially short stories that convey more texture and detail to the world in the form of thousands of words of text. Perhaps you’ll find this method of story-telling to your liking, after all I read every single codex entry in the Mass Effect universe, but here such an info-dump strikes a bum note. Wading through this mass of information and rambling will yield some city secrets but it feels like work to get through, especially when a video game has so many other forms it can translate such information to the player.

The other method The Old City uses is the narrator, unreliable and unstable as he might be. He certainly talks about the world you’re exploring with consummate ease and a knowledge far surpassing anything you’ll know about until you’ve fully explored and discovered everything. But he also does in such a way that gleaning knowledge from his observations can be a trial. As each chapter can be played back at any time as you progress it’s worth replaying in order to make sure you didn’t miss anything.

If you’re into the kind of discovery and exploration I’ve outlined here then The Old City Leviathan is a puzzle box you’ll enjoy unlocking through many hours of play. There are literal and metaphorical leaps of faith you’ll need to take in order to gain full enjoyment, but if you revel in metaphor and a world laced with biblical references and names then The Old City promises to be a journey you’ll remember and enjoy. I can’t say that I found it satisfying and many, if not most, themes went well over my head, but I can see why so many find this genre of discovery simulator so immersive and compelling. The Old City has a tendency to get into your head and bones after a few hours and as this is the first of a trilogy, I’m eager to see where Leviathan will take me next.

The disturbing appearance of previously hidden corpses giving the dark corridors beneath the Old City a very Rapture-like feel. 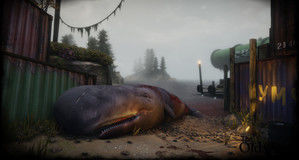