Pandemic's last gift to the world may be flawed and slightly cliched, but we like it all the same. (PS3, PC, Xbox 360)

If the Saboteur is to be believed, then during World War II the Nazis were so evil and so oppressive, that they literally drained the colour out of the surrounding environment using their evil Nazi magic. Furthermore, it was a pot-mouthed Irishman anti-hero superman who single handedly saved the day. Why he had to be Irish is anyone's guess, but I guess it's better than the usual stereotypes. Joking aside, The Saboteur is all about the lone wolf vs the Third Reich, throwing in ample explosions and thinly veiled one-liners mixed with a pint of Guinness.

Hailing from Pandemic studios (who are, sadly, no more), the guys behind Battlefront 1 & 2 and the Mercenaries games, The Saboteur provides a pretty addictive experience if you're easily distracted. Occupied Paris during World War 2 serves as the backdrop for the game, and the city itself plus some surrounding areas form an open-world playground for you to explore and interact with.


Those of you who liked the Mercenaries' style (if not production standard) should find a lot of transferable charm. You can't blow 'things' up to the extent that we'd like (which in hindsight is a bit of a major fail considering what you have to do 90% of the time), but there's still plenty of action to be had. As Sean Devlin, Irish ruffian extraordinaire (who also likes bombing things), you have to help the resistance liberate Paris from the clutches of German oppression, whilst also avenging your slain comrade. This is done through a series of inter-linking missions that take you from one area of the map to another, liberating the French capitol district by district. You can tell which districts need liberating because the oppressed portions of the city are toned in greyscale, bar the odd thing for highlighting purposes ( See? I wasn't kidding).

The main plot won't blow your mind, but it serves its purpose well: getting you around the map. At one point it takes a rather strange Raiders of the Lost Ark turn, which made us cringe slightly, but it's quite underplayed and so you won't have to interact with the offending segment much. The game as well does a good job of gradually expanding your area of operation by way of checkpoints that you need 'papers' to get through. These papers are acquired as you progress through the game. However, given your ability to climb the rooftops and just free roam in general, many of these checkpoints can be bypassed quite easily, which begs the question as to why bother. Still, there's always plenty to do in the sections you are allowed to visit officially, so you will probably never need to wonder beyond your area.


Despite the comparison with Mercs 2, The Saboteur is actually more linear than it's made out to be. To be frank, Devlin only really gets up to two things during the course of the game: Driving, and blowing things up. Even the missions, despite taking you to various 'scenic' places in Paris, involve one or both of those things. Outside of missions, the only entertainment is to blow up random Nazi installations or kill generals, of which the only reward is 'contraband' (aka, money), that you use to purchase weapons and ammo off the black market so you can... blow up random Nazi installations and kill generals. There is also things like Racing and the odd mini game scattered about, but these are so few and far between (and not mapped out very well) that it wouldn't be surprising if you missed them out.

If you lack the patience or get annoyed easily by repetitive gameplay, Saboteurs rustic charm will quickly wear off, to a point where you'll either just stick to the main missions, or you'll drop the game entirely. Still, it's certainly a good looking game. Combing some elements from Assassins Creed, you can take Sean Devlin from the streets of Paris all the way to the roof of the Notre Dame if you wanted. Climbing amongst the rooftops is apparently the recommended travel route, and many of the side-objects you can blow exist up high anyway. However, given the effort it takes to climb up one side, and climb down the other, it is sometimes much simpler to simply steal a car.


To be honest, this is another one of those games that really requires a lot of effort on behalf of the player to 'make' it more fun than it is sometimes. Despite earlier comments on repetitiveness, there's something oddly fun about just 'freestyling' for a while: going from roof top to roof top, destroying and killing anything you find and just trying to stay alive/unseen as long as possible. Taking out a platoon full of Nazi's plus associated installations without setting off the alarm can be oddly satisfying. Speaking of alarms - if you find yourself unable to kill quick enough, you'll end up being chased through the streets of Paris. Any German Soldier can blow his whistle which will set off an 'alarm' state. This state has five levels, and the area you have to escape to increases as the level increases, as well as the amount of enemies trying to find and kill you. You can use 'hiding spot's provided you get to them without being seen, but less hiding spots are available the higher the alarm level.

The Saboteur can be both addictive and engaging, but also rather stale, all at the same time. Serious issues such as the nature of a resistance campaign, terror tactics, victory at all costs, etc… are fairly buried underneath the game’s lighter tones. Still, it’s in line with Pandemic’s other works so it’s not like you should expect a moral masterpiece. If you want to put in the effort, than the rinse/repeat actions won’t seem as boring as they should be. It’s good to see that Pandemic’s last game has some decent production values,(Although there are still some trademark glitches to be seen), but unfortunately the lack of proper post-release support could mean that any annoying bugs could be there to stay. Pick it up if you’re looking for some destructo-derby fun, and don’t mind a bit of travel.

Getting into a tank and tearing the place up, Irish style. 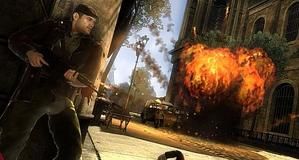