The Walking Dead Season 2: Episode 4 - Amid the Ruins

The Walking Dead Season 2: Episode 4 - Amid the Ruins Review

The fallout from the mall-out begins

In the review of the last episode of The Walking Dead: Season 2 I expressed doubt that the series could compellingly continue. The status quo and the threat had been reset and Clementine and her group were simply on the move, seemingly with no overarching story to push them forward. I expressed doubt that Telltale could continue things without simply doing "more Walking Dead", as opposed to doing the penultimate episode of a season. I've never been so glad to be wrong. Episode 4: Amid The Ruins is one of the best episodes of the series, if not the best.

Avoiding all major spoilers as usual, Amid The Ruins begins with the new group fleeing from Carver's probably-soon-to-fall mall through a herd of walkers by using the comic favourite trick of smearing zombie guts over themselves. This being Walking Dead all does not go to plan of course, and they soon find themselves split up. With spirits down and Rebecca's baby coming imminently whether they like it or not it's up to Clementine and various new members (I'm keeping them ambiguous in case there's some choice in the matter) to track down their missing people and find shelter and supplies. And, yes, things don't go to plan. Again. Oh, and there's a cute raccoon.


I was worried that Episode 4 would be all setup for a new status quo for just the next episode rather than continuing the story, since I couldn't see how it could continue after Episode 3. Telltale proves me wrong by mostly dealing with the fallout from the last episode and the group's botched escape attempt, building up the few new characters (loner-with-tragic-past Jane is particularly interesting), and setting things up to go horribly wrong in the finale. And it's edge-of-the-seat stuff. I can't spoil any of the best heartbreaking bits, but they come. Oh boy do they come. It also felt a decent size too.

Despite your best efforts things will go bad, which immediately leads me to talk about choices and consequences, the heart of Telltale's new gaming modus operandi. Their best episodes are the ones that make you feel fully in control of the story and yet completely surprised by how things end up, and Amid The Ruins is one of the best examples of this. Every single dialogue choice feels like it could make someone react to you differently, make you side between characters, or even get to decide if someone lives or dies. Even better, much like the brilliant third episode of The Wolf Among Us (good on Telltale for taking notes) at one point in the narrative there's a three-way choice in terms of locations - keep an eye on someone, help find supplies, or chat with some disillusioned characters. I've no idea whether choosing one destination over another first yields different results like in Wolf Among Us but it's a cool moment of choice in an episode where already every mouse click feels important.


The ending in particular is amazing, while I can't talk about specifics of course. There are several major elements at play that must have gone wildly different had I chosen alternate paths, and if I'd just done a single one out of place the ending must change completely. I absolutely have to play the season again now just for the ending to this episode (and it's not even the final one!), and I'm absolutely certain things will remain bad but in different ways. The Walking Dead is not a place for happy endings, every choice is tough and none of them is the right one. While some episodes Telltale has done this year have forgotten this point Amid The Ruins gets it absolutely spot-on.

It's also a relief to say that after the disturbing but otherwise often safe Episode 3 that the action/zombie quotient is pretty darn high. In every scene there is an ever-present threat of walkers, and it's nice to see the zombie hordes returned to such a scary unstoppable position for an episode (something that all versions of The Walking Dead occasionally forget to do). Therefore the QTEs this time have a lot more weight and are more present, so it honestly feels like you're regularly scrambling for your life or fighting for someone else's.


Finally I can say once again that the cast do a great job, with Melissa Hutchison's Clementine as usual the standout. Gavin Hammon as Kenny also does an amazing job as Episode 4 puts him through the wringer. Music as ever is excellent from Jared Emerson-Johnson, and there's another nice song over the end credits too. Getting a new song every episode is something Telltale haven't done since Sam & Max Season One!

THE WALKING DEAD SEASON 2: EPISODE 4 - AMID THE RUINS VERDICT

So is there nothing bad I can say about Amid The Ruins? Well, it’s still sometimes too tricky to click on things when there’s more than one option, but since that only happens in scenes where you’re not being attacked and can take your time it hardly matters. And that’s it. Amid The Ruins is utterly superb and is everything I want from a Walking Dead episode. Every single moment feels like it will make a difference to the narrative, and all the dialogue choices (of which there are many) can change how characters see Clementine - or each other. And that’s before we even get to the ending, which required several different choices to play out the way it did for me and any one could change it completely - even the cliffhanger! I’ve no idea where the story can go in the fifth and final episode of the season, but now I absolutely can’t wait to find out. Season 2 may not be overall better than Season 1 so far in my opinion, but Amid The Ruins is arguably the best episode of the entire series because it embraces story and choice/consequence gameplay better than all the others. And that’s no mean feat. Kudos Telltale, now better it with the finale. And bring back that raccoon, he was great.

The beginning? Maybe. The middle? Perhaps? The ending? Which one? ALL GREAT.

The Walking Dead Season 2: Episode 4 - Amid the Ruins Essentials 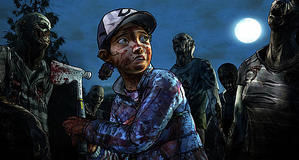