Total War: Warhammer 2 Is A Jungle Rumble Of Epic Proportions 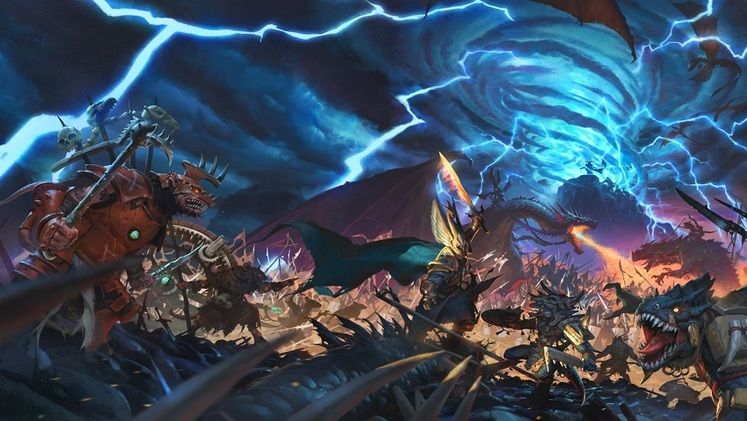 When Total War: Warhammer came onto the scene in 2016, it introduced a brilliant mesh of Total War gameplay and Warhammer mythology that won the hearts of fans and critics. The game gave players some of the best of the Total War real-time and turn-based strategy experience alongside a universe cultivated for decades in a plethora of celebrated books and board games. It was a little surprising to see Total War: Warhammer 2 announced only months after the first game and many fans voiced criticism that Creative Assembly could pull off another complete experience so soon, but the sequel has arrived and it’s no joke. Total War: Warhammer 2 is a content rich, riveting, and proper second chapter.

Want to see what we thought of the original Total War: Warhammer? Check out the base game review! 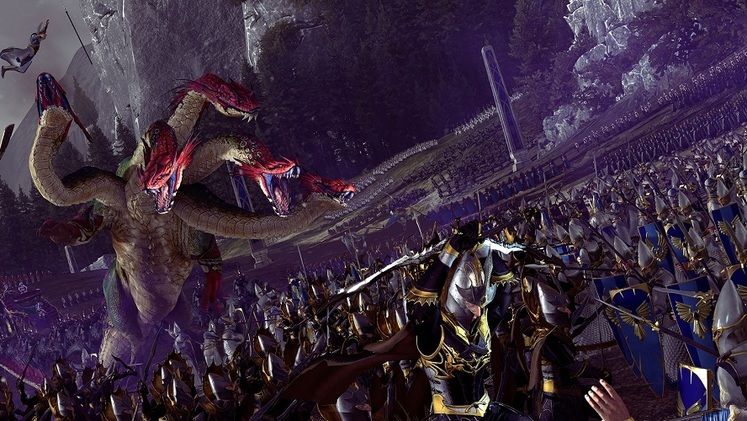 This second outing takes players to the jungle continent of Lustria centered around the Great Vortex. This tornado of magical energy drains excess magic from the world and keeps demonic forces restrained. However, when a mystical comet flies closer than usual, the Great Vortex falls out of balance and the world takes notice.

As the High Elves seek to set the Vortex right, their sworn enemies the Dark Elves engage to capture and harness the Vortex and restore the demons they worship. Meanwhile, the Lizardmen who fought the demons in long past join the fray to enact a prophesized plan and the rat-like Skaven hordes emerge from their burrows to take advantage of the chaos and seize the Vortex for their own greedy conquests. The story loses the somewhat sandbox campaign of the first game to engage players immediately with a focused race to be the faction that gains control of the Vortex to save or damn the world. It makes for a much more compelling venture and Lustria is wonderfully exotic location full of diverse terrain to carry it out in solo or multiplayer. 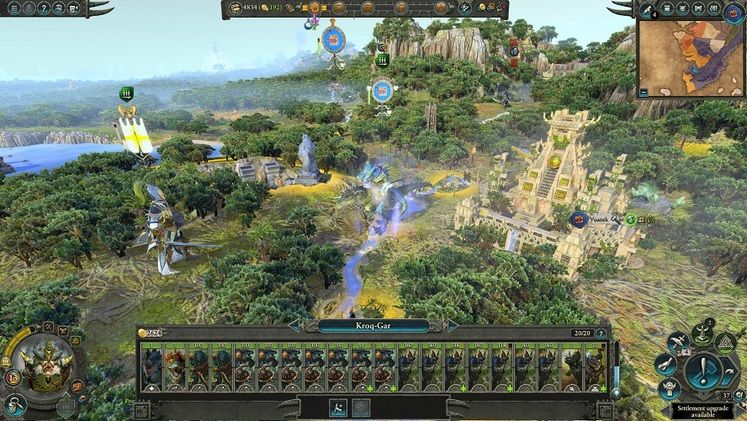 These races are all put to great use in the campaign as well with all of them placed upon a part of the Lustrian continent encircling the Great Vortex. Killing all your foes is still an option to win, but the race against your enemies to control the Vortex is another viable and interesting option to win. Throughout the game, each race builds a currency to conduct their own five rituals related to the Vortex. When a ritual is started, it takes a handful of turns to finish, several settlements must be defended during this time, and all factions can see that you’ve begun your ritual.

The other factions can choose to thwart your rituals and rogue factions will attack and get in your way. If you can complete the rituals, advance, and win in a final quest battle, the Vortex falls under your control and you take the campaign. This mix of narrative and objectives makes for a pretty great and intense campaign direction in Total War: Warhammer 2 and each faction has their own unique approach to make things even more interesting.

Total War: Warhammer 2’s four core races are also mechanically well set apart from what we’ve previously seen of factions in the first game. The High Elves and Dark Elves excel in military prowess where the Skaven and Lizardmen are foremost in ferocity and brutality. Each faction bears very different methods of conquest on and off the battlefield. For instance, the Skaven use a food resource to keep their multiplying denizens happy. Food can be won from building up settlements or making mincemeat of your enemies to eat after battle. This food can also be used for battle purposes. The Skaven can use food to call up surprise armies from underneath the feet of their foes, causing terror and confusion and very useful against isolated forces like archers. 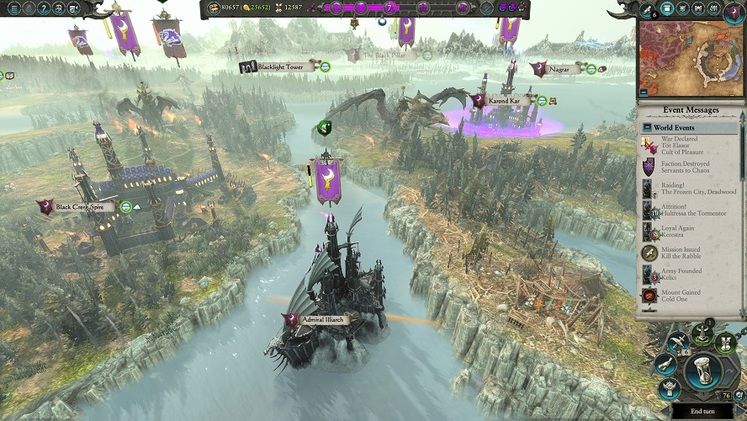 Meanwhile, the High Elves are a diplomatic race that feature a system called Intrigue of the Court. In this, the High Elves can spend currency in the form of Influence Points to gain the favor of other factions and boost or reduce relations between two foreign factions as well. On the field, they feature a great number of war machines built to thin foes at range with precise aim while melee military forces cut through what remains at the front. Each faction in the campaign has two leaders to play and an enjoyable host of neat features that make all of them fun to explore in one way or another.

One thing that has often kept Total War: Warhammer from being a perfect offering in the past has been the lengthy load times. Unfortunately, that’s still a bit of an issue in Total War: Warhammer 2. Getting into a campaign, loading a save, beginning and coming out of a battle, and more all take players to loading screens that take a more than noticeable amount of time to get through. It wouldn’t be so bad except for the battle part, which is a frequent affair once you get to intense late game conflicts. It can be said to be a good thing that we were enjoying the game so much that loading screens had us getting impatient, but it’s still a bit too long for how frequently the game uses loading screens. That said, auto-resolving battles is still a feature and seems to be even more sensibly balanced than in the first game when things are in your favor and you don’t feel like loading into an actual fight. 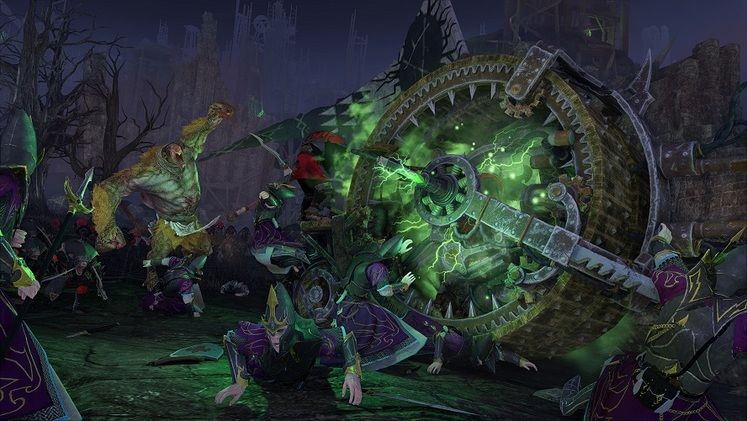 Despite the aforementioned loading screen issues with the game, Total War: Warhammer 2 is still a thing of beauty when it’s in motion. The land of Lustria is gorgeous whether you’re close up in the middle of your armies or quite far away getting a look at everything for strategic consideration. Both units and the environment look like they’ve been crafted with utmost care and the animations of chaos and brutality look good up close. On lower settings, there’s an oddity where instead of tree brush being see-through, it will outright disappear when the camera is close to woods, making trees look barren. That can make it a little difficult to tell which woods look lush enough to conceal your forces. Otherwise, Total War: Warhammer 2 handles very nicely under almost all circumstances.

Creative Assembly has been a busy studio in these last couple years between the releases of the first Total War: Warhammer and its downloadable content, but they did not rest on their laurels with the sequel. Total War: Warhammer 2 is one of the most engaging and awesome marriages of turn-based and real-time strategy out there. Whether you’re sitting on your high horse among the elven factions or unleashing primal fury as the bestial races, there’s a great deal of enjoyment to be had that will keep you busy hour upon hour through multiple campaigns, skirmishes, and battles. Total War: Warhammer 2 continues to hoist the bar even higher for both Total War and Warhammer.

Good or evil, securing victory only to run down their stragglers and kill them before they can escape the battlefield is devilish fun.