A Blizzard of ideas

The first thing you should know about Tryst? That it’s not StarCraft, but it so desperately wants to be that you might have to double-take at some of the design choices in BlueGiant’s space-bound RTS. From the visual style to the viewpoint and aspects of the HUD, Blizzard’s finest work is undoubtedly ingrained into the DNA of this second offering from their talented indie team, but it’s a shame that any of the polish and production value that StarCraft is renowned for hasn’t quite made the transition. Regardless, Tryst at least throws some new ideas into the RTS mix, and it ends up as a fast-paced and interesting game in its own right.

The singleplayer campaign however, no matter what way you look at it, is a fairly perfunctory tutorial-driven offering that experienced players could quite easily obliterate within 4-5 hours. BlueGiant does at least introduce the plot with a copious amount of up-front video and text for people that really want to invest themselves in the universe, and it’s nice to see that sort of ambition coming through in what’s ostensibly a low-price downloadable title. It’s also to their credit that almost all of the back-story and scene-setting is entirely optional, allowing those that just want to get into the skirmish the chance to do so with absolute ease.


For those that venture into the lore however, Tryst sets out its stall as a tale of conflict between humans and a race of robotic alien beings known as the Zali. Those nefarious sentient mechanised beings are former allies of the human race, but the mining planet of Ishtonia IV sets the stage for a war over a rare compound by the name of Lohum. Needless to say, diplomacy is a long-gone tactic by the time that Tryst begins to weave its tale, and a ragtag group of rebels forms a coalition with the human overlords to attempt to bring an end to the destruction in the only way they know how - more destruction.

Anybody wanting an RTS that pulls them into a decent storyline then, you can probably think again. It’s not that BlueGiant hasn’t tried hard to bring some character development and plot twists to the table or incorporate those into the level design in interesting ways, but it’s rather that trying too hard with an obviously limited development budget might have stretched their ambitions a little too thin. The voice acting and script are be a prime example of that, with a level of quality that ranges from the absurd to the flat-out weird. Accents range all over the place from Russian to West Country England to India and back, but not in a calculated universal future-space marine fashion such as the original Halo; rather in the fashion of a game that grabbed anybody on the development team that was available to do some voice work.

Casting the story aside for a moment then, Tryst’s RTS mechanics will be familiar to anybody with a passing interest in the genre whether they choose the human or alien faction. You’ll start most maps (aside from the first two singleplayer missions) with a limited base of operations, resource points dotted around the map to capture, and a tech tree to scale in order to pump out ground or aerial units and defences. Engineers build your base, command structures increase the available unit types in your arsenal, and turrets keep you safe from intruding visitors. Up to seven other armies can be competing, animation and audio is fairly rudimentary, and the pace is incredibly quick.


In terms of those basic building blocks Tryst is a decent enough RTS in its own right, with good balance and a frenetic pace in the latter stages of each game. Unit types need to be macro and micro-managed to successfully overcome the opposition forces, and there’s room for improvisation on the battlefield with the many unique abilities that are tied to each unit type. These can be customised with some light RPG elements, allowing you to spend your resources on traits and abilities for each of your squad members rather than simply pumping out more of the same type. Load-outs can be changed on the fly depending on your circumstances and mission objectives, allowing for a taste of the sort of micro-manoeuvring that fans of Relic’s titles will appreciate.

The problem however, is that in spreading themselves between the two different approaches to the genre, Tryst becomes a little ill-defined in its style. There’s likely too much complexity (in later missions and skirmish games anyway) for Command & Conquer-style fans to be able to manage, but nowhere near the AI complexity and level of subtlety that a Company of Heroes or Dawn of War player might come to expect. It’s not that Tryst specifically needed to copy either blueprint wholesale, but rather that the elements incorporated from both don’t quite add up to an experience that can approach either. It’s certainly a decent amount of fun for a little while, but it can’t hold a candle to any of the games mentioned above, let alone the ubiquitous inspiration that is StarCraft.


Multiplayer skirmishes, as with most RTS games, hold the key to most of Tryst’s best moments, and it’s clear that the team would like for it to have a following in the mould of an e-sport title or something similar. The few multiplayer sessions that I was able to play were certainly enjoyable conflicts, with the fast pace leading to some incredibly quick battles in which power was transferred around the map with frequency. It does feel like a relatively light experience due to those traits however, and I’m not entirely sure how much staying power that Tryst will generate in the long run. Low server populations at the moment seem to support that theory, but then with it only having been on sale for the better part of a week, perhaps BlueGiant’s fan-base is still in the making.

Whatever happens though, Tryst is a neat spin on the RTS genre that tries to incorporate a few new ideas that ultimately don’t quite add up. It’s interesting, baffling and - at times - bizarre whilst it lasts, and if the community ultimately flocks around it during the coming weeks, you’ll likely have a few hours’ fun delving into multiplayer matches and figuring out your best build queues before moving on. Unfortunately it might not be the classic the developer was hoping for, but nevertheless there are some unique moments here for long-term fans of the genre to inspect. In that regard, BlueGiant hopefully has a bright future ahead of them. 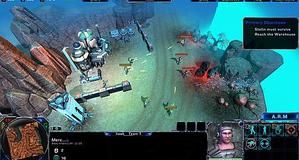